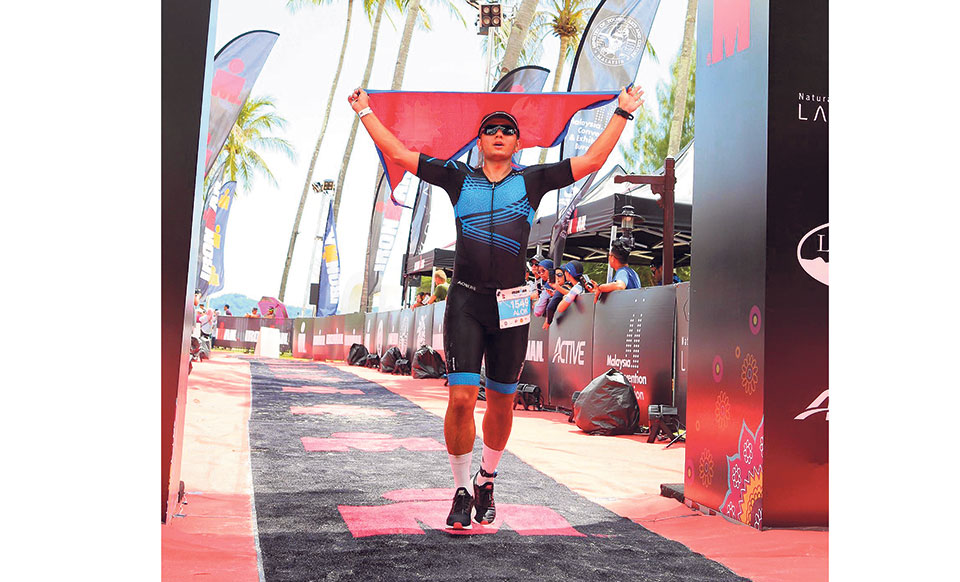 KATHMANDU, Nov 1: Alok Khatri, 28, completed the Ironman 70.3 triathlon race on October 26, becoming the first Ironman 70.3 finisher from Nepal. He finished the race in six hours 44 minutes and 49 seconds in the competition held in Langkawi, Malaysia.

This is Nepal’s first representation at an Ironman Event in which athletes from 70 different countries participated. Ironman 70.3, widely considered as one of the most difficult one-day sporting events in the world, is a long-distance triathlon consisting of a 1.9 km ocean swim, 90 km cycling and 21.1 km run. Every year thousands of participants from around the world take part in the Ironman Races.

These races are more popular in cities that are close to the oceans, open waters and have good road biking facilities. Khatri was coached by Kaustabh Radkar, who is 24-time Ironman Finisher from India and Sudip Rajbhandari, an Elite National Swimmer.

According to Rajbhandari, Alok could not even swim 25 meters on the first day when he first approached to the coach for training. “I was shocked because he approached me saying he wanted to compete in Ironman, one of the hardest one-day sporting events. After a few days of training I saw potential in him as he was very hard working. So I decided to train him even as the event was just six months away,” said Rajbhandari.

Rajbhandari expressed happiness that Alok was able to complete the rigorous and challenging Ironman 70.3 triathlon race and keep a record for Nepal. “In the end, his hard work paid off and he became the first Ironman race completer from Nepal,” he added.

The Ironman race was initiated in 1978 when US Naval Commander John Collins and his wife issued The Ironman Challenge for 15 participating competitors in Hawai, USA. Since then it has become a global movement of pushing Human Barriers with the theme ‘Anything is Possible’.

Alok plans to continue racing at Ironman in the years to come with an eye at the elusive World Championship Slot. “It was my childhood dream to be an athlete, I started training because I wanted to pose myself a challenge that would feel farfetched,” said Khatri “Ironman to me seemed like a perfect fit so I trained for it relentlessly, my trainings lasted from two to six hours a day for one and a half year.”

KATHMANDU, July 28: The qualifying event for Asia Cup 2018 has been shifted to Malaysia, where top six Asian associate... Read More...

House swept away in Panchthar, three people missing
5 hours ago