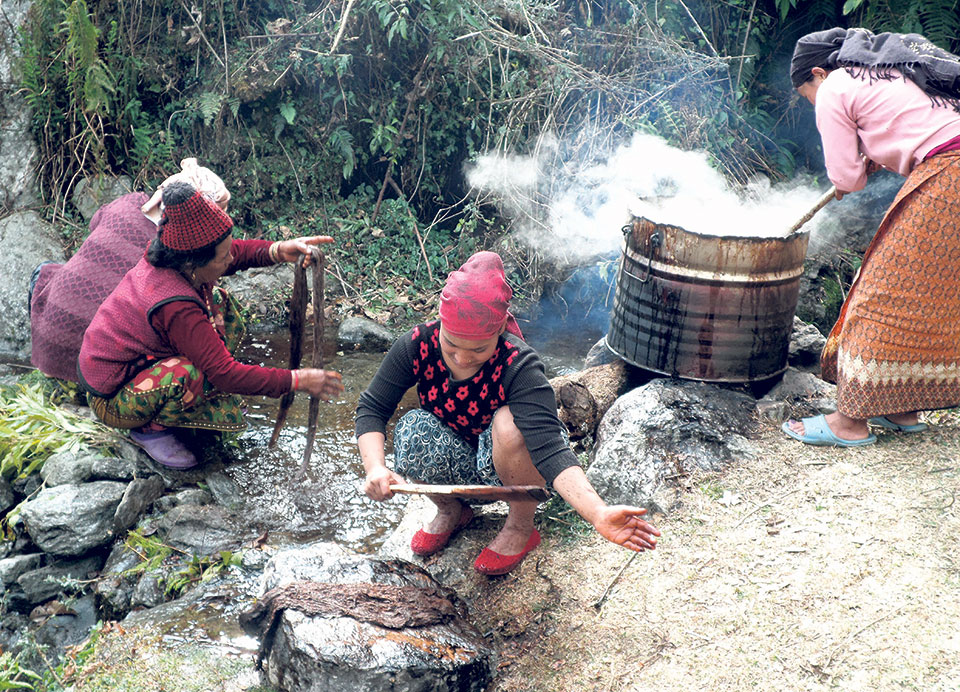 LAMJUNG, Jan 10: As the products made of natural Allo fiber are gaining good market values, more women in Lamjung are attracted towards its production and processing.

This fiber is commonly found in the forests of upper hills of the district. Allo products like coats, pants, socks, bags, purses among others are bought as gifts by the urban dwellers and tourists. Ram Kumar Shrestha, former chief of Lamjung Chamber of Commerce and Industry (LCCI) said that Allo is good for health and it products are strong and of good  quality. As per the current market value, this fiber is sold for Rs.900 to Rs. 1100 per meter depending on its quality. "Allo products are equally popular in the international market," said Shrestha.

District Cottage and Small Scale Industry Development Office (DCSSIDO), LCCI and various other organizations conducted programs in the villages to make the people aware about the use, importance and market of Allo. "This has attracted a lot of women into the Allo business" said Banmaya Gurung, 52, of Siurung village.

According to Rajesh Thapa, chairperson of LCCI, more people have started taking Allo production and processing as their occupation. A large number of women of Siurung, Bahundanda, Kaulepani, Sikles of Kaski participated in three months program conducted by DCSSIDO last year. Those women were given training on harvesting and cutting Allo. Besides that they were also taught how to weave clothes from the Allo fiber.

According to Bishnumaya Gurung of Bahundanda, women have started producing Allo products in groups these days.  This fiber which is widely found in the upper hills of Bhoje, Pasgaun, Uttarkanya, Bhujung, Ghanpokhara, Khudi, Ghermu, Bahundanda, Bhulbhule among others often gets wasted.  According to the locals, this fiber is underutilized as most of the people are still unaware about its importance and use.

Though the process of separating fiber from Allo plant is a hectic process, the good market price of Allo products has attracted the locals. People can make good money from buying gifts and products of Allo but the responsible authorities need to make more efforts for the promotion of Allo and its products, according to locals.

TERHATHUM, March 18: With the objective of encouraging women to give births at birthing centers and health institutions, Menchyayem Rural Municipality... Read More...