All four children of a family become crippled after turning seven 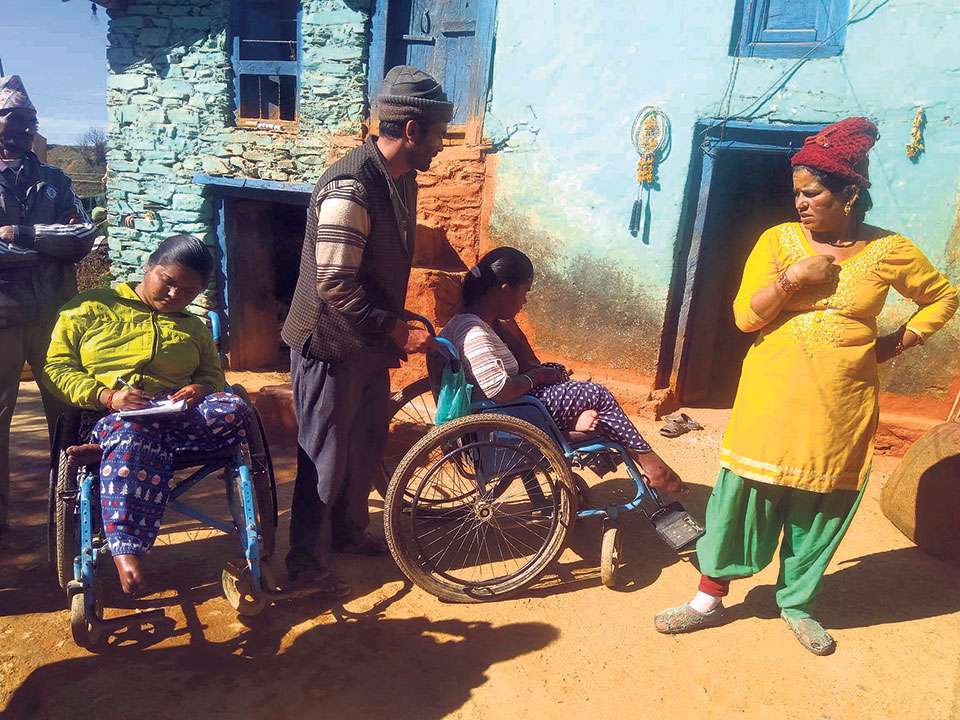 Fifteen-year-old Karishma Bohora (C) and her sister Hira, 23, who have been suffering from disability since the age of seven. Photo: Bira Gadal/Republica

BAITADI, May 15: Watching helplessly all four of his children turn cripple one after another by the age of seven, Purna Bahadur Bohora of Dasharathchand Municipality-2, Dehimandu could hardly do anything but curse his fate.

He spent all his money and did everything possible for the treatment of his three daughters and a son. Except for one daughter, other three children are still struggling with their disability. After treatment, one of the daughters Bhumika, 17, fortunately has been cured. She is currently pursuing a vocational training at Bhimdutta Polytechnic Institute in Patan, Baitadi.

None of the children were born with disability but they developed various problems as they turned seven. His daughters Hira, 23, Karishma, 15, and son Jayanta, 10, have to rely on others for their survival. They cannot walk and are hardly able to move other body parts. Despite taking them to various hospitals in India and Nepal, they could hardly get cured.

"They all started showing similar symptoms after they reached the age of seven," said Purna, adding, "We spent all our money, but their health has not improved a bit." The cash-strapped family does not even have enough money to buy medicines for the disabled children.

Though the Bohora couple carries the little son to school, their two disabled daughters can't move without wheelchair. The couple laments that they have nothing left in the name of asset to afford for the treatment of their children.

"Maybe, they can be treated if taken to well-equipped hospitals but we don't have the money," said Devaki, mother of the four children.

As she spends most of her time taking care of her daughters, she hardly has time for performing other works. They have opened a small eatery in the market area from which they manage to earn some money for their livelihood.

However, have been offered a respite after the municipality arranged a teacher for their two daughters after they could not go to school from last year.

Karishma appeared for the Secondary Education Examination (SEE) from her home last year.

The couple says that various organizations came forward to collect the details of the children and even assured of financial help for their treatment but they never turned up again.

This was no less than rubbing salt to the wounds of the Bohora couple. But they still hope that they could one day see their children walk and play like others.

Treatment of scrub typhus to be free

RATNANAGAR (Chitwan), Sept 9: The treatment of 'Scrub Typhus' will be cost-free in government run hospitals of Chitwan after 200... Read More...