All eyes on parliament 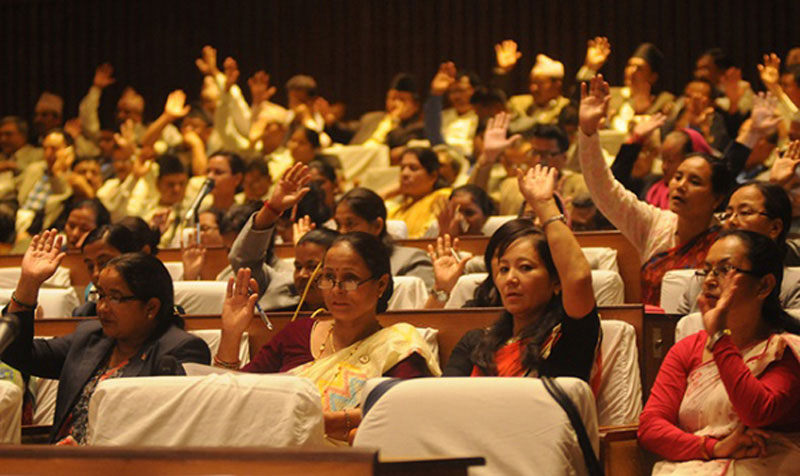 Our lawmakers seem more worried over their personal welfare than the welfare of the country and the people
A pedestrian’s analysis about the demise—whether it was timely or untimely depends on where you stand—of the 1990’s parliamentary system, established on the rubble of the tyrannical Panchayat regime that collapsed when the winds of change blowing in Eastern Europe swept over Asia, was that it had become too corrupt, thanks, mainly, to unscrupulous politicians.

At the height of the era of parliamentary democracy and constitutional monarchy—you may even want to call it a demon-cracy, if you are an anti-establishment type—the situation was such in the land of Never Ending Peace and Love that bureaucrats would risk losing their jobs if they were not close to political parties. We didn’t have a spoils system, but the system we had back then was far worse. Anyway, the bureaucrats would always be at the risk of not only losing their jobs but also landing in jail if they were not careful and easily gave in to pressure and made controversial decisions or put their signatures on some documents that would unlawfully benefit their overlords—their ministers.

The administrative Kotparva happened during the heydays of that system. Hundreds of senior government officials lost their jobs (not all of them were ‘corrupt’) in the name of administrative rightsizing initiated during the rule of a ‘democrat’ prime minister.

Yours truly has read somewhere that the father of the child, who would one day become a democratic leader and prime minister, lost his job when he sent tattered clothes to his employer Chandra Shumsher. The extended family faced considerable hardships after the sole breadwinner in the family became jobless. Was the later Kotparva aimed at teaching the same lesson to his subordinates? No one knows, for the man with the answer is no more.

Those senior officials, who were close to the coterie, retained their jobs even during the Kotparva, even if they were at least knee-deep in corruption.

The dismissed ones moved the Supreme Court, which took about two and a half years to issue a verdict, proving the dictum that justice delayed is justice denied. And when the court spiked the government decision, the democrat prime minister did not bother to put in papers on moral grounds, for that would have been against his ‘greatness’. Leave alone resign, he even did not even bother to apologize to the unjustly-removed bureaucrats and their families.

In those times, there were rumors that one had to pay certain amount to ministers concerned if you wanted to become, say, an inspector or a teacher. Plum jobs at state-owned public entities were for political cadres. And they did their jobs ‘exceptionally well’. Not long after they took over, even profit-making enterprises started bleeding themselves dry, giving the government the much-needed license to privatize those entities.

During those days, people could get away unscathed, even if they had swindled millions, if they were the system’s offspring or near and dear ones of the rulers. It was during those days that the armed personnel carrier scam happened. Some Securocrats got punished, while the political leadership involved in it remained beyond the long arm of the law.

In the heydays of that system, horse trading flourished in the parliament. A powerful leader aspiring for prime ministership could buy votes back then. Making the lawmakers ratify a controversial agreement/treaty was no big deal then.

The system was great in theory, thanks to the ’best Constitution in the world’. In course of time, it became synonymous with one family and one ‘towering figure’. While it was stewing in its own juice, an insurgency put the final nail in its coffin.

The new system is also showing similar symptoms. Around 600 lawmakers seem more worried over their personal welfare than that of the country and the people. They may disagree on issues galore, but almost all of them come together when it comes to giving themselves a hefty pay-rise.

Despite protests from the opposition parties in the sovereign Parliament and on the streets, especially against the hugely-unpopular proposal on redrawing of Province 5, the government has tabled a Constitution Amendment Bill in a conspiratorial manner. There are fears that horse trading reminiscent of the old days will be repeated, deepening the national crisis and giving rise to another devastating conflict. Ahead of the crucial vote on the Bill, the executive, the legislative, the judiciary and the fourth estate must ensure fair play in the parliament if they want this democratic system to last.

KATHMANDU, June 18: Over 70 motions on matters of urgent public importance were registered at the Parliament Secretariat in the... Read More...

Why is India dragged time and again into Nepal’s domestic politics?
3 hours ago

KP Oli-led party will emerge as the largest party in April-May polls: FinMin Poudel
5 hours ago