In the context of Nepal, a study found that the relationship between external borrowing and economic growth results in an increased burden with the significance in the size and magnitude of such debt.

Generally speaking, public debt is the debt that the government has raised from internal and external sources that is a major method of government financing. The aim of external borrowing is that the fund should be utilized properly in the productive sectors so that the country's economy boosts up with the enhancing investment, with a good exchange rate and controlled inflation. The relationship between external debt and economic growth is long-term in nature.

Emerging developing countries like Nigeria, Brazil, and South Africa are taking a huge amount of external debt to boost their economies. Some countries like Sri Lanka are facing debt crises and are unable to pay back the debt. There was a crowding-out effect on private investment due to external borrowing by the government to make it easily available. Some researchers found that external debt at a high-interest rate may create a crisis in the economy. Another reason for the deadlock of the economy from the external debt is the mis-utilization of the fund and improper planning and corruption.

In this context, the adverse effects of foreign debt may occur in the economy. The impact of public debt on private investment in the context of the Sri Lankan perspective resulted in a long-term impact. The results show there was the crowding out effect of external debt on private investment in the long run indicating that the government has spurred the fund to private sectors. One study revealed that external debt did not show a positive long-term effect on the economic growth of India. The negative impact of external borrowing on economic growth has been significantly found in Oman. However, there was a positive significant relationship between gross fixed capital and economic growth.

External debt of Nepal in the last five years shows an increasing trend as it stood at 21.75 percent of the GDP in the fiscal year 2020/2021. There may be the possibility of the adverse effect of foreign debt on performance. 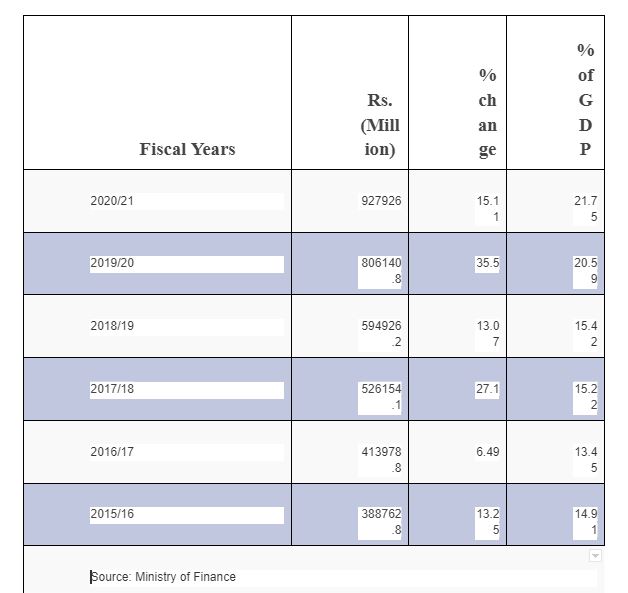 The last five years show that the portion of external debt is increasing. In fiscal years 2015/16, it was 14.91 percent of the National Income which was a 13.25 percent change on previous fiscal years which was Rs 388.76 billion. The figure increased to Rs 928 billion in fiscal years 2020/2021 which was 21.75 percent. It has been estimated that this figure will be Rs 985 billion by mid-July.

In the context of Nepal, a study found that the relationship between external borrowing and economic growth results in an increased burden with the significance in the size and magnitude of such debt. The effect of external debt on economic growth is positive. Another study concludes if external debt increases by one unit, GDP growth decreases by 0.61 units. Similarly, increasing the internal debt by one unit increases the GDP growth by 1.05 percent. Therefore, policy makers should increase the portion of the internal debt which is effective in the context of Nepali public financing.

External debt should be discouraged which may reduce GDP growth. The government should rethink the policy while formulating the budget so that there are easy sources of external borrowing with a low-interest rate. Nepali sources of finance should be expanded while preparing the budget with proper plans, policies, and implementation strategies so that proper utilization of public funds should be emphasized. Corruption should be taken with Zero tolerance. The government should focus on reforms widely so that contingent liabilities are mitigated for the investment promotion in treasury bonds, pension funds, and institutional funding.

KATHMANDU, Oct 7: The World Bank (WB) has projected that the Nepali economy will grow by 3.9 percent in the current... Read More...