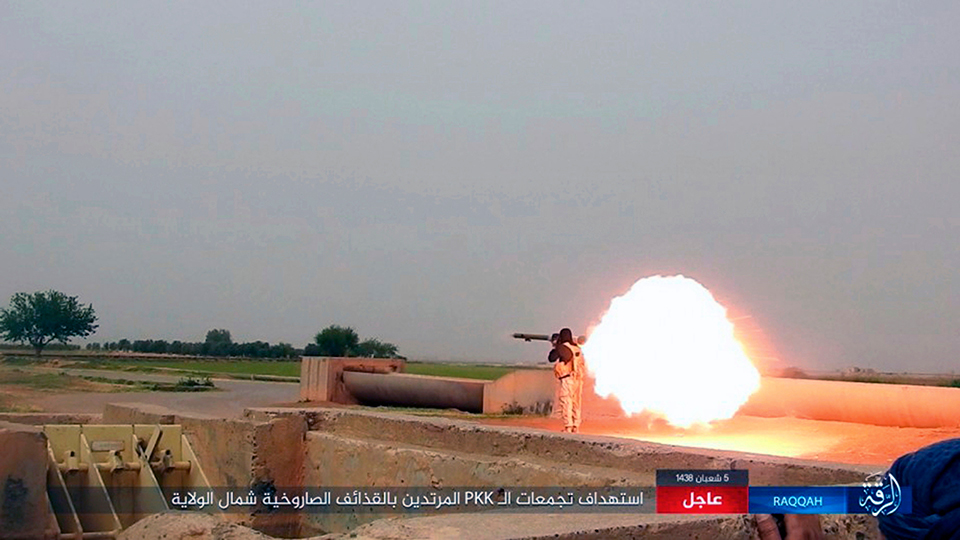 This undated image posted online Monday, May. 1, 2017, by supporters of the Islamic State militant group on an anonymous photo sharing website, purports to show an Islamic State fighter firing his weapon during clashes with U.S.-backed Kurdish-led Syrian Democratic Forces, in the northern Syrian province of Raqqa. (AP)

BEIRUT, May 26: A fresh wave of airstrikes in eastern Syria killed at least 35 civilians including women and children, state media and an observer group reported Friday, and the U.N. human rights chief said civilians are increasingly paying the price of escalating attacks against the Islamic State group in the country.

Zeid Ra'ad al-Hussein's comments came hours after airstrikes on the eastern Syrian town of Mayadeen, where airstrikes Thursday night killed 35, many of them family members of IS fighters. The Britain-based Syrian Observatory for Human Rights said the airstrikes were conducted by the U.S.-led coalition fighting IS. It added that the airstrikes happened at sunset Thursday as people were heading to mosques for evening prayers.

"The same civilians who are suffering indiscriminate shelling and summary executions by ISIL, are also falling victim to the escalating airstrikes, particularly in the northeastern governorates of" Raqqa and Deir el-Zour, al-Hussein said in a statement from Geneva, using another acronym for IS. "Unfortunately, scant attention is being paid by the outside world to the appalling predicament of the civilians trapped in these areas."

Syria's state news agency SANA also said 35 civilians, most of them women and children, were killed in the airstrikes, also blaming the coalition.

Reports of deaths among civilians have been on the rise as the fighting against IS intensifies in northern and eastern Syria.

Omar Abu Laila, a Europe-based opposition activist who is originally from eastern Syria, said Mayadeen residents were urged through mosque loudspeakers to head to hospitals and clinics to donate blood. He added that more airstrikes occurred in the early hours Friday.

Al-Hussein, the U.N. human rights chief, in a dramatic appeal on Friday urged all parties conducting strikes against the Islamic State group in Syria to take greater care differentiating between military and civilian targets.

He cited a May 14 strike that reportedly killed 23 farm workers in a rural area of Raqqa province and an airstrike the following day that is said to have killed at least 59 civilians and wounded dozens in the IS-controlled eastern town of Boukamal that is also in in Deir el-Zour province.

Al-Hussein, who is a member of the Jordanian royal family, said the rising toll of civilian casualties suggests "insufficient precautions" are being taken in the attacks.

Al-Hussein said he was concerned about retaliatory measures taken by IS against civilians suspected of facilitating the airstrikes and reports that civilians were being prevented from leaving IS-controlled areas. The day after the al-Bukamal incident, IS fighters reportedly cut the throats of eight men at the site of the attack, accusing them of providing coordinates for the air strikes.