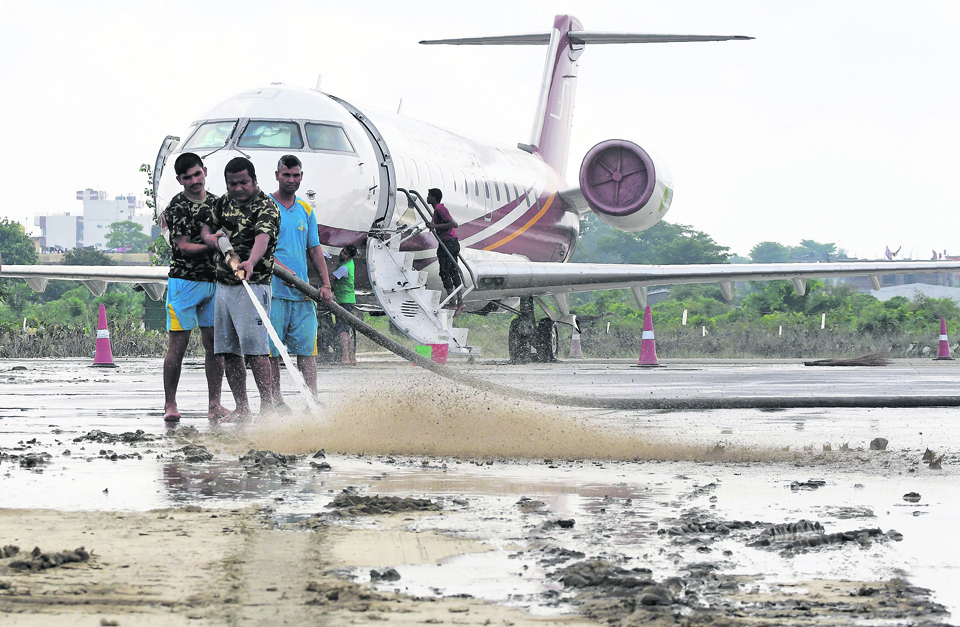 KATHMANDU, August 19: Airlines companies partly resumed their flights in the Kathmandu - Biratnagar sector on Saturday, after a weeklong halt due to massive rainfall and floods in the eastern part of the country that had closed down Biratnagar airport.

Apart from Biratnagar, domestic flights in other sectors were also affected due to rainfall and floods, however those flights had resumed soon after the rains stopped.

According to Civil Aviation Authority of Nepal, Biratnagar, two planes of Saurya Airlines and three planes of Yeti Airlines landed at Biratnagar airport on Saturday. The airport had opened at 9am on Saturday morning.

The Biratnagar airport was inundated by flood water caused by incessant rainfall since the previous week, and the runway was left completely covered with mud and sand. The Biratnagar Airport had shut down all its air services since last Saturday.

According to Suresh Man Shrestha, chief of Civil Aviation Authority of Nepal (CAAN), the airport will take at least one to two months to resume its services in full capacity.
"We have partly operated the airport for the sake of passengers," Shrestha said: "This is just a preliminary effort to provide relief to the public, and we are still working for full recovery of the airport."

About 200 Nepal Army personnel were mobilized to clear the debris on the runway.
Debris on the airport has damaged most of the equipment and machinery. Even the drainage has been blocked due to mud and sands.

"All the lighting systems were damaged by water they need full maintenance which might take more time," Shrestha added: "We have cleared only 9 inches of mud from the runway and the entrance and exit gates."

Other parts of the airport including the drainage need to be cleared. Shrestha said that even a small rain could affect the airport again as all the drainages have been blocked. He added that they were working on clearance and maintenance of the airport in order to make it fully operational as soon as possible.

ISTANBUL, June 23:Turkish Airlines has said that it will increase flights to Kathmandu if price of aviation turbine fuel in... Read More...