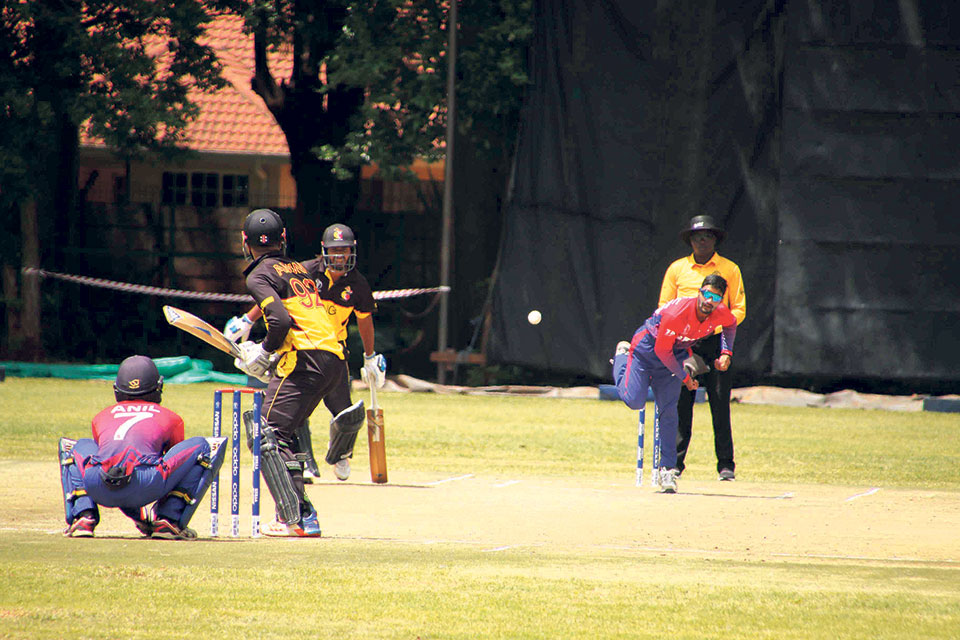 Nepal had a commanding win over Papua New Guniea (PNG) by six wickets in the ongoing ICC Cricket World Cup Qualifiers at Old Hararians Sports Club in Zimbabwe on Thursday. Sandeep Lamichhane also contributed heavily to Nepal’s win by picking up four wickets to bundle PNG out for 114 runs in 27.4 overs before Nepal completed the chase in 23 overs.

Nepal has earned the ODI status for the next four-year cycle until the next World Cup qualifiers starts. Nepal has joined the illustrious list of Scotland, the United Arab Emirates and the Netherlands, outside the Test nations’ world, to be named as the 16th ODI nation in current official ranking of International Cricket Council (ICC).

Gyanendra Malla’s misery with the bat continued as he was dismissed by Alei Nao for one run in the third delivery he faced. Norman Vanua then struck shortly to reduce Nepal to 13 runs for the loss of two wickets in 2.5 overs. Nepali skipper Paras Khadka, who came in the crease at number three, then launched a counter-attack scoring 20 runs that included two fours and a six in 18 deliveries to take Nepal’s run-rate above six runs per over. He miscued a pull shot off John Reva as a comfortable catch was completed by Tony Ura at mid on. At 35 runs for the loss of 3 wickets in 6.5 overs, Nepal’s was staring at another batting collapse.

However, Nepal’s U-19 captain Airee and young batsman Aarif Sheikh shared a matured partnership of 73 runs dominated by singles and doubles to take Nepal to a winning position with 102 runs at the end of the 21st over. Airee made a well-constructed innings of 50 runs from 58 deliveries. His first boundary came only after facing 31 deliveries into his innings. He launched three more sixes to finish it off with style against PNG. He scored a six to complete his half-century and secure a win in the last ball of the 23rd over. He was supported by Sheikh’s 26 runs which came from 42 deliveries. Rohit Paudel remained not out on three runs from eight deliveries.

After a good start, the spinners led by young sensation Sandeep Lamichhane ran rampant throughout the PNG middle and lower order to bundle them out cheaply. Lamichhane dismissed four middle order batsmen in a row including the wickets of Chad Soper, Sese Bau, Mahuru Dai and Kiplin Doriga to leave PNG reeling at 63 runs for the loss of six wickets in 16.1 overs.

It went from bad to worse for PNG as Airee came to wrap up the lower order batsmen to bundle PNG out of 114 runs. Airee was on hat-trick when he dismissed Jason Kila and Norman Vanua in back to back deliveries in 26th over. In his first 4-wicket-haul in List-A cricket, Airee added the wicket of Charles Amini to his name. Airee finished with the bowling figures of 4.2-0-14-4, outshining leg-spinner Lamichhane’s 8-0-29-4 in the match. PNG was dismissed for 114 runs in 27.2 overs.

In other match, the Netherlands, already an ODI nation, defeated Hong Kong by 44 runs in simultaneous cross-over payoff for seventh place finish between the respective groups to ensure Nepal finishes above Hong Kong and PNG to qualify for an ODI status.

KATHMANDU, March 15: It boils down to the Nepal versus Papua New Guinea (PNG) match in the ongoing ICC Cricket World... Read More...

It will take a few more days for the weather to improve: MFD
1 minute ago