Tigers and Biratnagar Warriors are tied on four points with the latter team yet to play its final match against Kathmandu Kings XI on Monday.

Tigers have a net run rate of -0.185 to Warriors’ -0.075. If Warriors is to qualify for the playoffs it has to win the final group match, but Tigers can qualify only if Warriors lose by some margin of runs or few many deliveries to face. Kings XI, Bhairahawa Gladiators and Lalitpur Patriots have already qualified for the playoffs whereas Pokhara Rhinos are eliminated from the EPL after losing all the five matches.

Player-of-the-match Airee was helped by a measured innings by Irish opening batsman Paul Stirling who scored 55 runs from 46 deliveries which included five fours and two sixes. Stirling and Airee shared a partnership of 71 runs in the middle to ensure the second victory of the tournament.

Rhinos bowler Nandan Yadav who replaced Kishore Mahato in the playing XI picked up two wickets of John Simpson, the player-of-the-match of Tigers’ last victory and Sandeep Sunar who made 9 and 10 runs respectively. Susan Bhari was the only other wicket-taker of the match with a wicket of Stirling conceding 19 runs from his four overs. Shakti Gauchan playing his farewell domestic match conceded 25 runs from his four wicket-less overs.

Earlier, Tigers had won the toss and elected to bowl first. Sunil Dhamala scored the only second fifty of the EPL by a Nepali batsman to propel his team Rhinos’ total to 129 runs by the end of 20 overs. The right-handed batsman smashed three boundaries and two sixes.

English all-rounder George Scott from Middlesex County was the pick of the bowlers with a three-wicket-haul picking up the wickets of Coetzer, Dhamala and Rajesh Pulami Magar for 12 runs.

Lalit Singh Bhandari continued his goof form with the ball with two more wickets to his name. He is on top of the wicket-taking chart in EPL.

Tigers have finished with its five matches with two wins and three losses. The qualification hopes depends on the performance of Warriors who play Kings XI on Monday.

The winner of the match between Lalitpur Patriots and Gladiators will take the other spot in the top two.

Bhuvan Karki and Sharad Vesawkar shared a wicket each.

Earlier, Kings XI won the toss and invited Gladiators to bat first in the morning start.

Jeetendra Mukhiya picked up his first two wickets of the tournament to give an early breakthrough to Kings XI in the form of Pradeep Airee for a duck. However, Ravi Inder Singh continued his glorious form of the tournament staying unbeaten on 86 runs from 61 deliveries which included six boundaries and four mammoth sixes.

Singh played beautiful strokes all around the park in a partnership of 109 runs with Vesawkar who made 39 runs from 31 deliveries. The Gladiators skipper scored three boundaries and a six during his innings.

O’Brien and Sahu shared a wicket each whereas Mustafa bowled four overs for 22 runs without taking a wicket. Kings XI are on the third position on the points table and will have to defeat Warriors on Monday to finish in top two.

The first and second placed teams in the points table will play the first qualifier from where the winner will directly go to the final of the third season of EPL whereas the loser of the match will get another opportunity to qualify to play against the winner of the eliminator.

The third and fourth-placed teams compete in an eliminator. 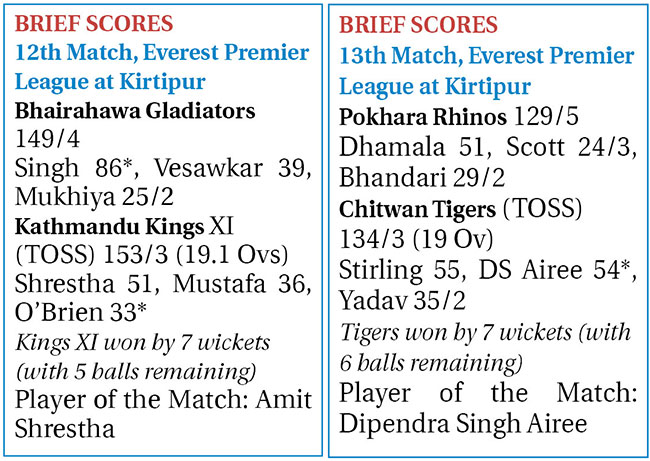 41 injured in bus accident in Dhading
10 hours ago