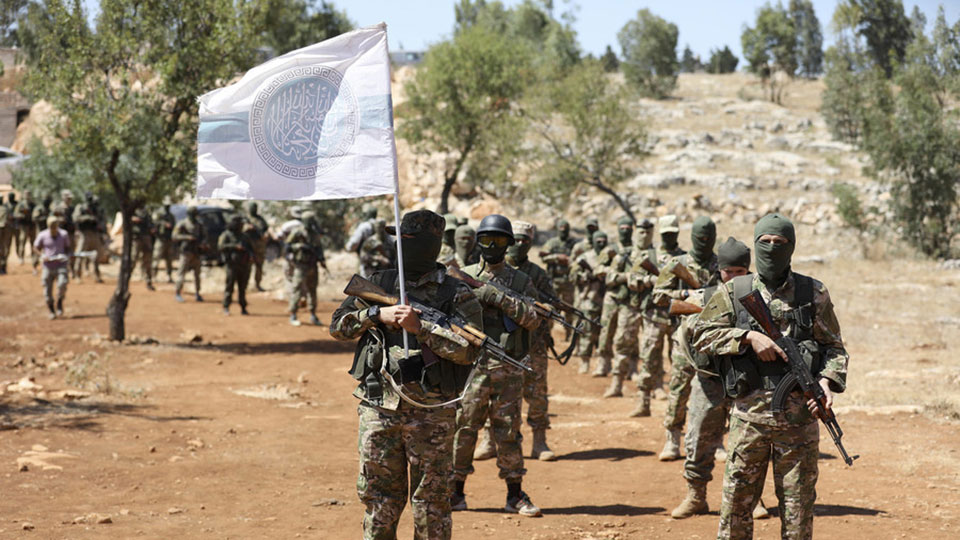 Hayat Tahrir al-Sham (HTS) members at a camp in the countryside of the northern Idlib province on August 14, 2018. Photo: Omar Haj Kadour / AFP

WASHINGTON DC, Sept 4: A New York Times report warning of an impending bloodbath in Idlib downplays the fact that the Syrian province is controlled by Al-Qaeda affiliated terrorists, portraying the “rebels” as humanitarian-minded administrators.

“Millions of civilians are dreading what comes next” in Idlib, the New York Times reports, after presumably consulting with most of the province’s estimated three million inhabitants. In a true masterpiece of euphemism-infested journalism, the Times has turned the operation to liberate Idlib from a US-designated terrorist group on its head, bemoaning the uncertain fate of the “rebel fighters and their civilian supporters who rose up more than seven years ago demanding regime change.”

Scroll about 20 paragraphs down and the Gray Lady notes with a dismissive air that Syria’s deputy prime minister called these brave fighters “terrorists” (scare-quote credit: NYT) during an interview with Russian (yes, Russian!) television on Saturday. The paper then provides crucial context to help counter this cynical Kremlin soundbite, pointing out that while it’s true that Hayat Tahrir al-Sham (HTS), “which is affiliated with Al-Qaeda,” has controlled much of Idlib since 2015, there’s more to Al-Qaeda affiliation than meets the eye. After all, the State Department-designated terrorist group has dutifully acted as “a de facto governmental authority, facilitating trade across the long border with Turkey and organizing aid deliveries.”

Seventeen years after the September 11 terrorist attacks, the New York Times is now writing articles commending Al-Qaeda affiliates for their aid-delivering abilities. No mention of reports of their chemical weapon stockpiles, however.

Perhaps unsurprisingly, for many of these “fighters” – especially “foreigners who have moved to Syria to help defeat the government” – surrender is not an option, the Times informs us.

A “fighter” who spoke to the paper said that he and his comrades were frustrated because “we came for jihad” and not “to have truces and to kneel before the Turks.” The terrorist – sorry, “fighter” – only provided his first name to reporters, “out of fear for his safety.”

And of course, the paper inserts the obligatory swipe at Russia, quoting Foreign Minister Sergei Lavrov’s comment that Idlib is a “festering abscess” that needs to be drained. No mention of Lavrov’s efforts to negotiate a humanitarian corridor that would ensure the safe and orderly evacuation of civilians, however.

In a testament to the newspaper’s complete lack of self-awareness, the article notes that Turkey has “worked” with HTS, “despite its affiliation with Al Qaeda, as both have shared a desire to unseat Mr. Assad.”

Seems like Erdogan isn’t the only one who can overlook a few foibles in the pursuit of regime change.

MOSCOW, Sept 9 : A number of Syrian state and media-linked YouTube accounts have gone dark, as the battle for Idlib... Read More...