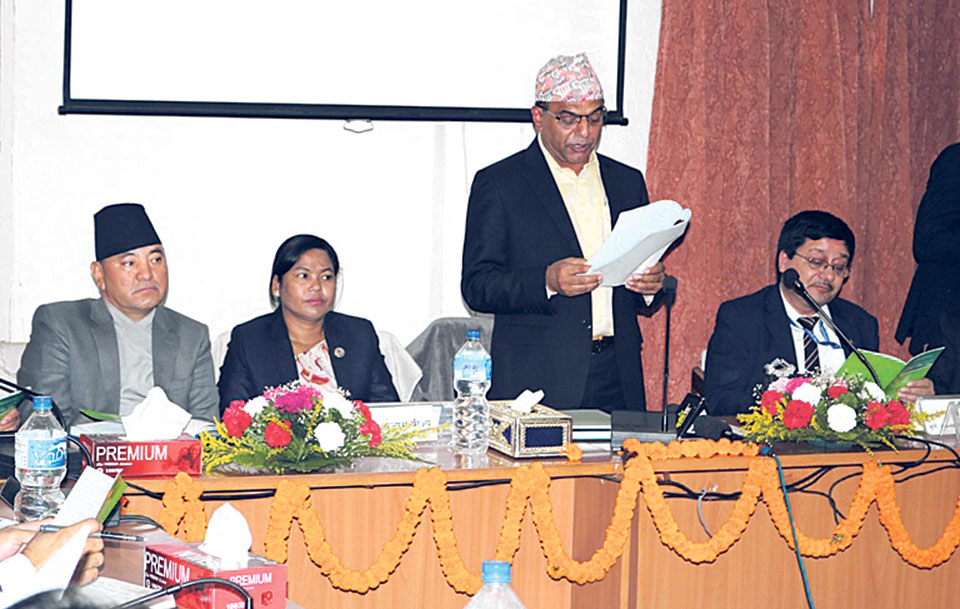 KATHMANDU, May 7: Minister for Agricultural, Land Management and Cooperatives, Chakra Pani Khanal, has said that making the country self-sufficient in most of the agricultural products will be the main agenda during his five-year term.

Speaking at a program organized to make public workplan of the ministry for the next five years in Kathmandu on Sunday, Minister Khanal said that the first phase of his working plan will focus on making the country self-sufficient in agricultural products“ "In the next stage, the ministry will work to increase export of farm products. Achieving agricultural prosperity is a gradual process. We have now taken a step in this directio”," he added.

This is not the first time that agriculture minister has made commitment to make the country self-sufficient in agri products. Khanal, however, has made the commitment to achieve the target in five years. Reducing farm imports by 75 percent within five years is one of the agenda enshrined in his 58-point plan.

Toward agricultural and livestock sectors, the minister has expressed commitment to update policies and regulations as per the changed context. According to the plan, projects and programs that have failed to achieve their targets will be scrapped. Similarly, the ministry will build an effective database of agricultural sector by putting in place National Agricultural Statistics and Market Information System within a year.

Khanal also said that the government will set up cold storage facilities, laboratories, agro crop processing centers, and packaging and grading centers along with other infrastructure to facilitate farmers. He added that the ministry plans to build Integrated Agricultural Markets at all local units across the country within three years.

Speaking at the program, he vowed to gradually eradicate challenges faced by livestock farmers“ "We will distribute identification cards to farmers within two years, categorizing them based on their production and sources," he said, adding that Farmer Pension Project will be implemented to support low-income farmers.

Toward land management issue, Minister Khanal expressed commitment to bring and implement Land Policy & Land-Use Act which, among others, will have a policy of prohibiting the use of fertile land for plotting or another unproductive purpose.

Meanwhile, Khanal said that the ministry will organize a conference of experts within six months for improvement of overall agricultural sector, prepare a sustainable strategy, and design and select effective and result-oriented agricultural projects

Similarly, the ministry has announced to set up a media center for effective flow of information about activities of the ministry to public and stakeholders through mass media.

KATHMANDU, June 26: The government has said that Melamchi water will reach Kathmandu by the end of September. Minister for Water... Read More...