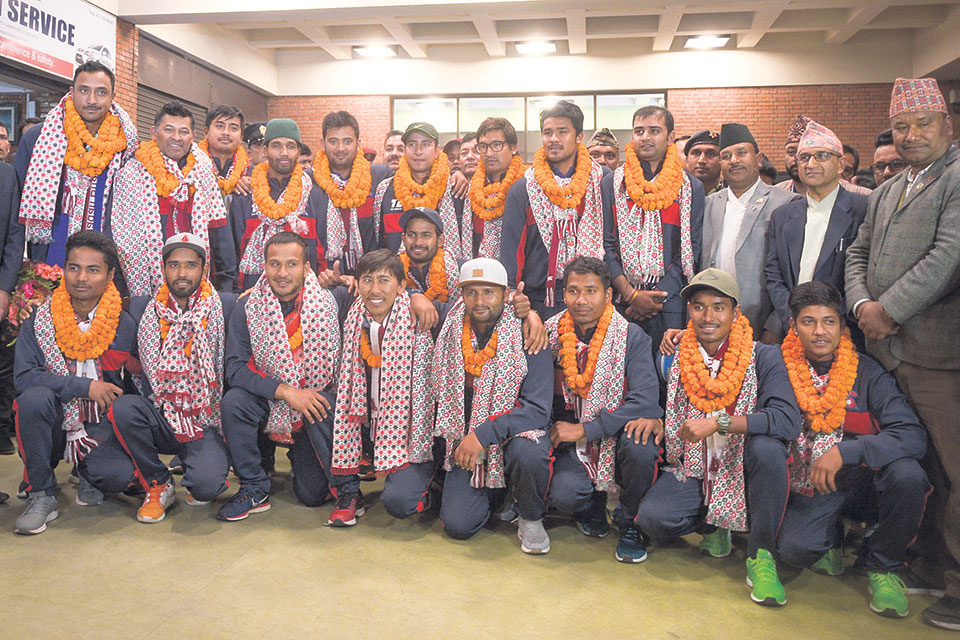 Bijay Gajmer/Republica. Players and officials of Nepal national cricket team pose for a group photo at the Tribhuvan International Airport in Kathmandu on Monday, upon their return from Zimbabwe after participating in the ICC Cricket World Cup Qualifier 2018.

KATHMANDU, March 20: The national cricket team has returned home on Monday from Zimbabwe after securing the One Day International (ODI) status in the ICC Cricket World Cup Qualifier 2018.

The team, which returned to Nepal from Zimbabwe at the Tribhuvan International Airport (TIA), was welcomed by newly-appointed Minister for Youth and Sports Jagat Bishwakarma, secretary of the ministry Mahesh Dahal, Member Secretary of National Sports Council (NSC) Keshav Kumar Bista, and Treasurer Shailesh Karmacharya, among others.

A big crowd of Nepali cricket supporters also reached to the airport to welcome the cricketers.
Captain Paras Khadka while talking to media persons at the TIA said that now that the national team has secured the ODI status, he was more concerned about making the achievement meaningful by making further improvement in the cricket.

“We have returned to Nepal with the greatest achievement in the history of Nepali cricket. We have now got only the international recognition, but we are yet to play the World Cup, which we can do in the coming days,’’ Khadka said, “The main thing is responsibility and we have fulfilled it as a team which is the most important thing. The game in which the country is doing good should be given top priority.”

He was of the view that sports infrastructure, domestic structure of different leagues and wellbeing of players should be managed in a professional as well as commercial setup. “There is still a lot to be done despite achieving the ODI status and we can retain it only if we do all the things in a proper way,’’ he added.

“The qualifier for the T20 World Cup is approaching fast and we should be prepared properly for that. We should make an aim to play the ODI World Cup and to make Nepal a Test nation in the next 10 to 12 years,’’ the national skipper explained his vision. “We should be focused on solving the off-pitch disputes and move forward keeping the cricket above the interest of any individual.’’
Nepal head coach Jagat Tamatta said that the next challenge for the team is to retain the current ODI status in coming years as well.

“The country comes above anything else, so I want to thank and congratulate the government, the NSC and all the fans. The ODI status is a big achievement for Nepal, but it is important to hold it after four years as well,’’ Tamatta said, “We earlier had got the T20 status as well, but what we did after achieving that is a question in itself.”

He pointed out some crucial things to be done as a ODI country such as there must be a functioning cricket board or an association in the country. “There must be enough domestic tournaments and there must be 50-over, two-day or four-day tournaments to prepare ourselves,” he said. “If we play only two to four games in these four years, the ODI status will end.”
Tamatta further added that despite their dream was to reach the Super Sixes, the main target was to get the ODI status.

Nepal that lost its first match of the group stages to Zimbabwe by 116 runs was again defeated in the second match by Scotland by four wickets. After losing the third match to Afghanistan by six wickets, it had to beat Hong Kong which it did by five wickets.

So, Nepal finished fourth in Group B and faced Papua New Guinea (PNG) in the playoff and defeated PNG by six wickets. On the same day, the Netherlands overcame Hong Kong by 58 runs, which helped Nepal get the ODI status.

The ODI status was up for the grabs for the three associate teams until 2022 excluding the Netherlands. The United Arab Emirates (UAE) and Scotland earned the ODI status after reaching the Super Sixes. PNG, Nepal and Hong Kong fought for the remaining one spot, which Nepal managed to secure. But, Nepal did not finish the tournament in a happy note as it suffered a 45-run defeat at the hands of the Netherlands.

Import of electricity from India starts, export stopped
14 hours ago