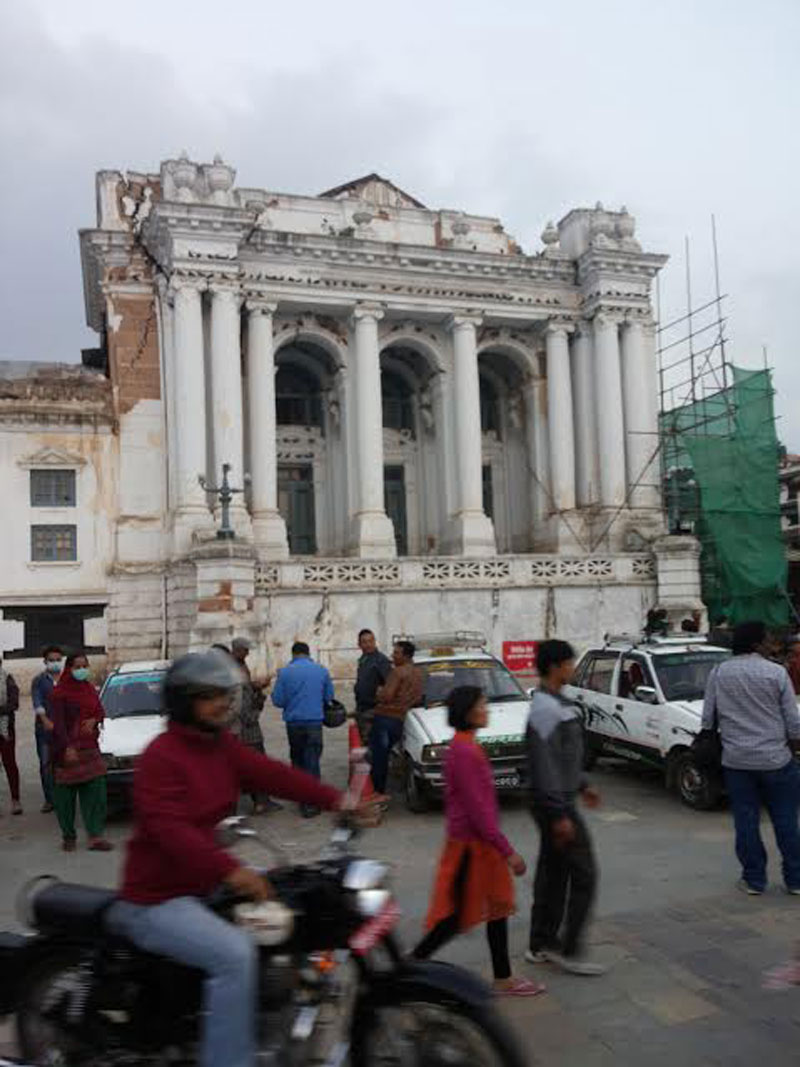 From the debris of despair, let rays of openness, coexistence and cooperation emerge to light the path to a confident future
Every year in mid-December, a clutch of monarchists pull some royal relics out of their attic and rattle off adulatory slogans at the Tin Dhara roundabout on Narayanhity Museum Road in the heart of Kathmandu. The strongman they mark with their antics—King Mahendra—was born in June, ascended to the throne in March, was crowned in May, and died in February. The only significance of December 15, or Push 1 of the BS calendar, lies in its infamy.

On that cold and gloomy day of the winter in 1960, the reprobate ruler had staged a royal-military coup and arrested the-then Prime Minister BP Koirala along with most of his senior cabinet members. The monarch had then gone on to dissolve the parliament, prohibit public assembly, proscribe political parties, throttle the press, suspend fundamental freedoms and invest himself with all supreme legislative, executive and judicial power. By his deeds, he had become the State, a quintessential Oriental Despot of Marxian explanation.

Apparently, there are all kinds of people in this world including neo-Nazis, Putinistas, Trumpists, Modi-Bhaktas, Brexiters and Olians that strongly believe that their societies are headed for disaster unless a savior on horseback doesn’t take the lead to restore the imagined glory of an invented past.

Some Mahendrists survive even in this day and age.

Deep-seated anxieties of Mahendra had begun to manifest itself through his diffidence when he was still the Crown Prince. In comparison to their Rana cousins and in-laws, the Shahs were of relatively modest means. King Tribhuvan had had the advantage of basking in the fame of having ousted the family of usurpers. His son had to carry forward the torch of constitutionalism without the ability or willingness to shoulder the heavy burden. His inadequacies were further deepened by more educated, better connected and highly accomplished ‘freedom fighters’ of Nepali Congress.

Especially in the presence of the towering personality of BP, Mahendra probably felt like a moral and political dwarf. The royal-military coup was his way of exacting revenge with the natural course of history. However, with the native cunning of a Gorkhali prince, he had correctly gauged that the resistance to his drastic step will be minimal in conditions prevailing inside and outside the country in the early 1960s.

In the neighborhood, the presumptuous ruler was probably aware of Jawaharlal Nehru’s dislike for BP, who had been closer to Indian leaders such as Ram Manohar Lohia, Jayprakash Narayan and Achyut Patwardhan, among others. His daughter Indira Gandhi, President of the Indian National Congress, was furious with NC honchos as they had physically and financially assisted competitors of her party in Uttar Pradesh elections. She detested supercilious socialists and held a deep grudge against Koiralas for some personal reasons. The South Block bureaucracy was uncomfortable with politicos of a small country that counted their ministers as personal friends.

The Chinese considered BP too close to the Westerners for their comfort while for the Cold War strategists of the USA, the Prime Minister of Nepal wasn’t sufficiently anti-Communist, in addition to being a pacifist resisting military expansion. When everyone on the international scene wanted it to go, it would have been a miracle to save a government no matter how popular it was at home.

Unfortunately, despite his two-thirds majority in the parliament, BP wasn’t exactly very popular in Kathmandu either. Perhaps that was the reason ‘not a dog barked’ when a democratically-elected leader was picked up by the military from a mass meeting of youths in the capital city.

In his election pamphlet years later, pioneering republican leader Ramraja Prasad Singh lamented ruefully: “Ironically, at the time of his arrest, the Champion of our liberty, Shree B. P. Koirala, had taken a symbolic asylum in the tempestuous youth rally of Tarun Dal. But on his arrest not a bosom was bared to dash against a bullet and not a drop of blood was shed to anoint the altar of freedom.

Composedly they went home caring a little what epithet history would attribute to them and how vehemently the posterity would point an accusing finger at them.” Ramarajababu discovered the reason years later when he was defeated in first presidential elections of the country: A fearful polity and society accustomed to darkness is so blinded by a sudden flash of light that it finds solace only in tightly closing its eyes.

Comforting blindfold
To be fair to the memory of the highly insecure, disturbingly reticent and outrageously ambitious monarch, Mahendra at least had a motive of leaving legacies of Crown for the first-born son, wealth for other progeny, prosperity for cousins and cronies, and pomposity for larger society. Mahendrists of the modern era—the Olians—have no interest other than increasing their own power and pelf. And yet, they repeatedly succeed in fooling all of the people all of the time in the name of nationalism. How does that happen? It has remained an enduring enigma.

At the time of rise of Hitler, Germans were a stable society experimenting with the refined Weimer constitution. Donald Trump rose from the decadence of American prosperity in a unipolar—or multi-polar—world with no economic, military, social or cultural challenge to its complete hegemony.

Narendra Modi phenomenon is a product of sustained economic growth of Manmohanomics for more than a decade. It seems fear of the ‘other’ increases in proportion of the achievements.

Mahendra played upon insecurities of the PEON in Kathmandu that Nepali Congress rule would spell the end of its monopoly over the apparatuses of the state. State being the sole resource of prosperity, power and respectability in Nepal, the elite readily fell in line with Mahendra’s authoritarian designs. Hitler alluded to inherent superiority of a defeated race to arouse their ressentiment—a psychological state resulting from suppressed feelings of envy and hatred that can’t be satisfied—and lead them to collective doom. The Bhaktas in India sold the spectre of a ‘foreign-born’ becoming the Prime Minister of the great country of billion-plus people.

It was even easier for Trump. Seldom framed in such clear terms, but the question in every Trumpist’s mind used to be the same: After a two-term African-American in the White House, a woman now? What next in the redemptive city upon the hill? The answer to that question would be intentionally left hanging to suit the prejudice. Procedural democracy alone is clearly not strong enough to resist primal fears of the ‘other’ taking possession of one’s collective ‘body’, which is what the ‘nation’ is to most people.

The Olian paranoia in Nepal was perhaps driven by the Mahendrist loathing of Dhotis—a popular PEON term to denote Indians in general and Madheshis in particular—that had suddenly come to play an important role in national politics. No matter how hard Ram Baran Yadav tried to flaunt his designer labeda-suruwal ensemble, the PEON found it hard to digest that the first President of the republic was a Madheshi. The first Vice-President Parmanand Jha rubbed salt on their wounded psyche with his choice of language.

The Olian mindset was born from the experiences of the first Constituent Assembly. It swore to never let it happen again and wrote a constitution to ensure desirable outcomes in perpetuity. With Mahendrism, there had at least been an element of expectation—the dictator had promised to deliver developments in a decade that others had taken centuries to achieve. The Olian formulation is based on unalloyed fear of the future and a determination to keep the country tethered to its hidebound history.

Future foretold
At least a section of enlightened Nepalis have begun to realize that the Olian jingoism of ethnocentric nationalism bounded by borderline racism, unbridled chauvinism and debilitating xenophobia is not only bad for democracy but also detrimental to the evolution of national unity. Once such awareness spreads, remains of Mahendrism would flow down the Bagmati through the Ganges to the sea. The alternative is too frightening to contemplate. Fear and hatred often generate similar responses.

Merchants of misery sometimes triumph temporarily, but true leaders, as Napoleon Bonaparte is reputed to have defined, is a dealer in hope. Mercifully, the Olian psychosis is on the wane. From the debris of despair, let rays of openness, coexistence and cooperation emerge that will light the path towards a confident future of the collective. On that optimistic note, Merry Christmas and Happy New Year to the believers and revellers alike.

Love in a Rush

While in teens we do some silly things that when we recall later, we either regret or laugh thinking that... Read More...