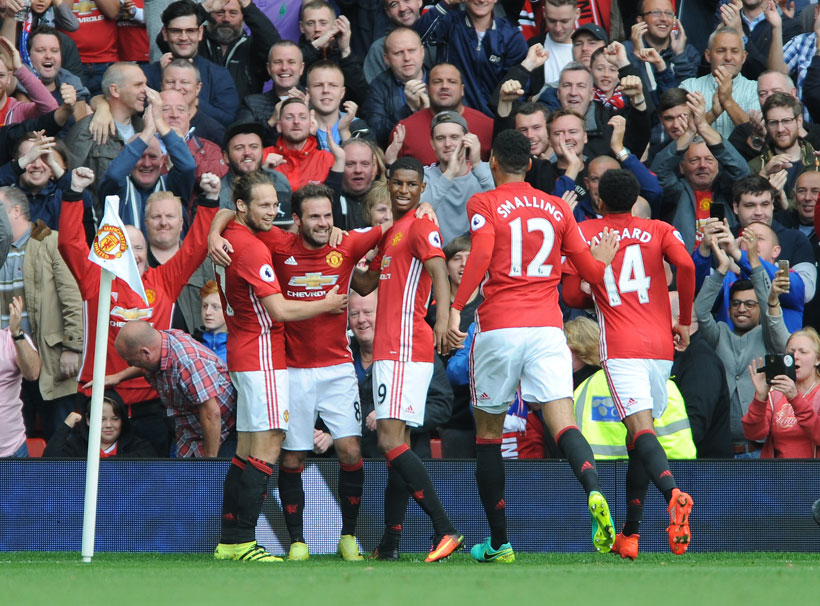 With its out-of-form captain on the bench, United scored four goals in a sparkling first-half display and overwhelmed champion Leicester 4-1 in the English Premier League on Saturday.

Juan Mata, Marcus Rashford and Paul Pogba scored in a rampant five-minute spell just before halftime after United had taken the lead through Chris Smalling, the team's captain in place of the demoted Rooney.

United ended a run of two straight league losses — against Manchester City and Watford — that had ruined its winning start to the campaign and led to widespread criticism of the makeup of Jose Mourinho's team.

Rooney bore the brunt of the criticism following his labored displays in the "No. 10" playmaker role, and Mourinho decided to put his 30-year-old captain on the bench in the biggest call of his United reign to date.

Leicester's defending clearly contributed to the scoreline — three of United's four goals came from left-wing corners — but United's attacking play without Rooney was a notch above anything the team has produced this season.

Pogba and Mata ran the midfield in front of the anchorman Ander Herrera, Zlatan Ibrahimovic floated around prompting play, while Rashford was his usual busy, direct self and scored for the third straight game.

Rooney, meanwhile, could only applaud from the bench as the goals flew in.

Leicester was so overwhelmed in the first half that its two chief attacking weapons, Jamie Vardy and Riyad Mahrez, were substituted at halftime with manager Claudio Ranieri in damage-limitation mode and possibly thinking ahead to the Champions League next week.

A bright start by Leicester was stopped in its tracks by Smalling's back-post header from Blind's corner in the 22nd minute. For the rest of the half, it was United at its relentless best.

With the new captain getting the first goal, Rooney's replacement in the No. 10 position got the second. Pogba clipped a short pass to Jesse Lingard, whose flick found Mata just inside of the area and he fired home in the 37th.

Mata set up the third, receiving a quickly taken corner by Blind next to the byline and crossing low for Rashford to tap in. Pogba made it 4-0 by heading in Blind's outswinging corner for his first goal for United since returning as the world's most expensive player.

United's level dropped after the break and Leicester's reorganized forward line created more openings, one of which saw substitute Demarai Gray smash a diagonal 25-meter shot into the top corner.

Rooney came on in the 83rd minute to applause, taking his place on the left wing, but the game was over by then.