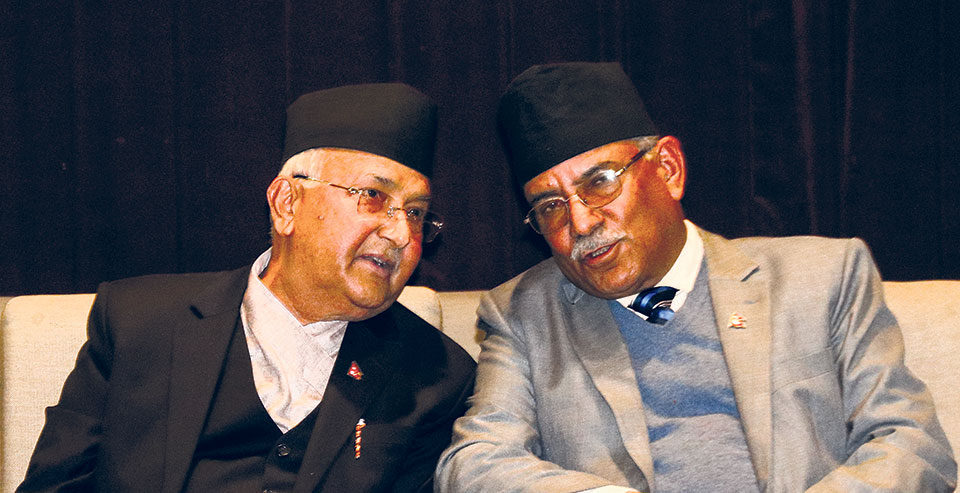 KATHMANDU, Dec 23: Following strong criticism from fellow party leaders, chairmen duo of the ruling Nepal Communist Party (NCP) - KP Oli and Pushpa Kamal Dahal - has agreed to revise their joint political report presented at the party's Standing Committee (SC) meeting. They have also agreed to accommodate the issues raised by the dissident leaders, according to leaders close to the two NCP bosses.

“It seems, the political report needs to be re-written. So, the chairmen will make changes accordingly. Before doing so, they will respond to the concerns raised by party leaders in tomorrow's meeting,” said SC Member Mani Thapa, who is said to be close to Dahal.

A majority of the leaders, who have commented on the political report in the ongoing SC meeting so far, demanded that the report be revised "for it has failed to reflect the recent domestic politics and geopolitics and challenges lying ahead." Oli's opponents in the party have accused him of "painting a rosy picture of the government instead of presenting the reality."

Some leaders, mainly those who have been given a role neither in the government nor in the party, have criticized Oli, who also heads the government as the prime minister, of sidelining the leaders with differing views in the party. “Provincial committees have not been formed in line with the party's statute. The political report has failed to portrait the actual socio-political situation of the country,” said senior party leader Madhav Kumar Nepal, adding, “There is no alternative to correcting the report by incorporating the views expressed in the meeting.”

Nepal, who is also a former prime minister, said that the people have not experienced any difference in service delivery and governance despite a government with a two-thirds majority in place.

Many disgruntled leaders have supported Gautam's 'one person, one position' policy. Leaders close to the party chairmen duo, however, said that there is no possibility of enforcing such a policy when Oli himself holds double responsibilities — as the party chief and the head of the government. Oli's supporters have argued that the provision of two chairmen was introduced in the party, keeping in mind the challenges of completing the ongoing party unification process.

“That's why there is no possibility of changing the existing power balance in the party,” said leader Thapa.

On Saturday, NCP General Secretary Bishnu Paudel, too, defended the government and party leadership, claiming that everything was alright and that there was no need for any change in the existing party organization. “So far, I have not heard anything wrong about the government. Nor has the government made any mistake. Those criticizing the party leadership over the recent work division in the party should exercise self-criticism,” said Poudel in the meeting.

The party's senior leaders Prithivi Subba Gurung and Shankar Pokharel, who are the chief ministers of Province 4 and Province 5, respectively, are also the party's in-charge in their respective provinces.

Meanwhile, former PM and senior NCP leader Nepal has been asked to clarify on the "controversial" involvement of the party's leaders as well as the government in the disputed international conference organized by the Universal Peace Federation. Leader Nepal, who actively participated in the conference in the capacity of a former prime minister, is preparing to present his views in tomorrow's meeting after almost all leaders commenting in the meeting demanded the party leadership to apologize for hosting the conference in partnership with the controversial Christian organization.

KATHMANDU, July 17: The Standing Committee meeting of the ruling Nepal Communist Party (NCP) scheduled for 11 am has been... Read More...

KATHMANDU, July 8: The Standing Committee meeting of the ruling Nepal Communist Party (NCP) has been postponed yet again. The... Read More...