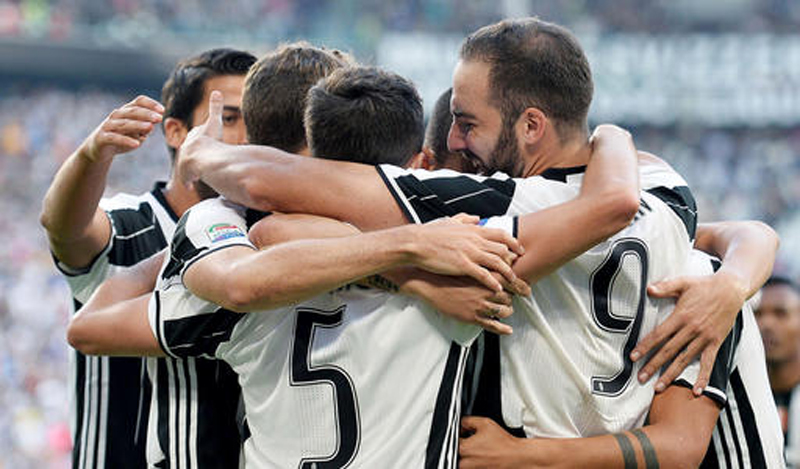 Juventus' Gonzalo Higuain, right, celebrates with his teammates after scoring during a Serie A soccer match between Juventus and Sassuolo at the Juventus Stadium in Turin, Italy, Saturday, Sept. 10, 2016. (Alessandro Di Marco/ANSA via AP)

ROME, Sept 13: After bringing in the likes of Gonzalo Higuain, Miralem Pjanic, Dani Alves and Medhi Benatia, the top priority for Juventus is clearly the Champions League.

Juventus has finished runner-up four times since it last won the trophy 20 years ago, including to Barcelona in 2015.

"Everyone says Juve will win everything — the league, cup and the Champions League. But that hurts us, because we lose perspective," Juventus coach Massimiliano Allegri said. "We've got to play the matches and win them on the pitch."

Juventus opens its campaign at home against Sevilla on Wednesday in Group H after impressing in its opening three Serie A matches.

Higuain transferred from rival Napoli for 90 million euros ($99 million) after scoring 36 goals last season to break a 66-year-old Serie A record. He scored twice in the opening 10 minutes of a 3-1 win over Sassuolo on Saturday.

"Juventus will definitely be a protagonist until the end," Bayern Munich coach Carlo Ancelotti, a former Juventus coach, told the Gazzetta dello Sport. "If you have a player who scores 30 goals per season that's really key — it gives you fewer uncertainties."

Here is a look at Wednesday's other matches:

Tottenham is back in the Champions League, and Monaco is returning after a one-year absence.

Monaco, which reached the Champions League final in 2004, is leading the French league and travels to England unbeaten in four games. The team has been boosted by the return of striker Radamel Falcao, who came back from a five-week injury layoff last weekend.

Meanwhile, Harry Kane scored his first goal of the season on Saturday as Tottenham beat Stoke 4-0 in the Premier League.

The match will take place at Wembley Stadium because of construction work at White Hart Lane.

Also, Bayer Leverkusen warmed up for CSKA Moscow's visit with a 3-1 win over Hamburg on Saturday.

Mexico striker Javier "Chicharito" Hernandez will again lead the front line against Moscow, which has lost on all five previous visits to Germany.

In the other group match, Borussia Dortmund will take on Legia Warsaw, Poland's first Champions League representatives since Widzew Lodz in 1996-97.

This is possibly the weakest of all the eight groups at this stage — despite boasting the presence of the English champions.

Leicester is making its debut in the Champions League after its unlikely title triumph in the Premier League last season and is joined in the group by two other inexperienced teams at this level.

Club Brugge, Leicester's first opponent on Wednesday, is competing in the group stage for the first time in 11 years while FC Copenhagen has only gotten this far three times before.

It leaves Champions League regular FC Porto — a two-time European champion — as comfortably the most experienced team in the group.

Porto and Copenhagen both had to go through qualifying. Copenhagen won six matches to make it this far, while Porto overcame Italian side Roma in the playoff round with a 4-1 aggregate win.

Leicester was the story of European soccer last season but the encore is proving tough. The team has won only one of the first four games and heads to Belgium on the back of a 4-1 loss at Liverpool.

Coming off a 3-1 loss in the French league that exposed its defensive frailties, Lyon will host Dinamo Zagreb.

The seven-time French champions may have to play without striker Alexandre Lacazette because of a left leg injury. The France international's absence is a problem for Lyon coach Bruno Genesio, who does not have proper cover on the bench.

Dinamo has its own worries. The Croatian club's unbeaten run of 103 league matches at home, dating back to 2010, ended over the weekend against Osijek.