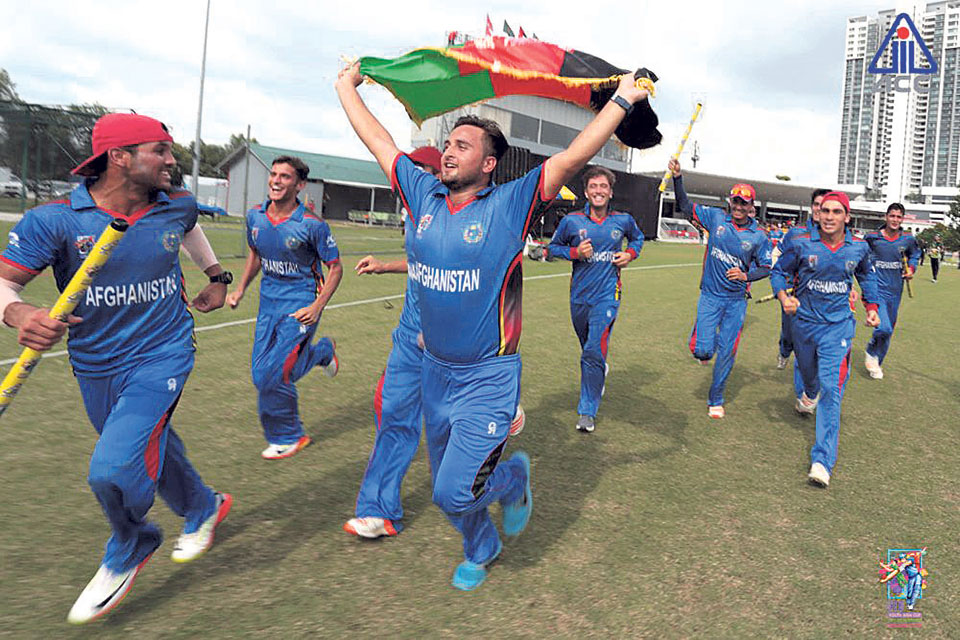 Players of Afghanistan U-19 team celebrate after winning the ACC U-19 Youth Asia Cup final match against Pakistan at the Kinrara Oval cricket ground in Puchong, Malaysia on Sunday.

KATHMANDU, Nov 20: Afghanistan has won the ACC U-19 Youth Asia Cup defeating Pakistan in the summit clash by 185 runs on Sunday.

With the win, Afghanistan became the third country to win the Asia Cup. The first edition was lifted jointly by India and Pakistan while rest two editions were clinched by India.

This time, title holder India was crashed out from the group stage after facing a shocking 19-run defeat to Nepal and eight-wicket loss to Bangladesh.

To book its place in the final, Afghanistan had defeated Nepal by seven wickets in the semifinal match while Pakistan recorded two-run win over Bangladesh.

Meanwhile, the summit win was second victory for Afghanistan against Pakistan in the tournament. The Afghani side had stunned Pakistan in the Group B match on the opening day.

At the Kinrara Oval Cricket ground in Puchong of Malaysia, Pakistan won the toss and invited Afghanistan for batting.

Mujeeb Ur Rahman was pick of the Afghani bowling as he claimed impressive 5-13. He was supported by Qais Ahmad Kamawal who pocketed three wickets. Likewise, Wafadar Momand added one wicket. Rahman became the highest wicket taker in the tournament with 20 wickets while Sri Lanka’s Praveen Jayawickrama and Sandeep Lamichhane came in the second and third places with 11 and nine wickets respectively.

A total of eight teams participated in the tournament including five Test playing nations: India, Pakistan, Sri Lanka, Bangladesh, and Afghanistan. Malaysia took part as the host, while Nepal and the United Arab Emirates earned the tickets as the eastern and western region champions respectively.

Over 100,000 Pfizer vaccines to arrive in Nepal on Monday
15 hours ago