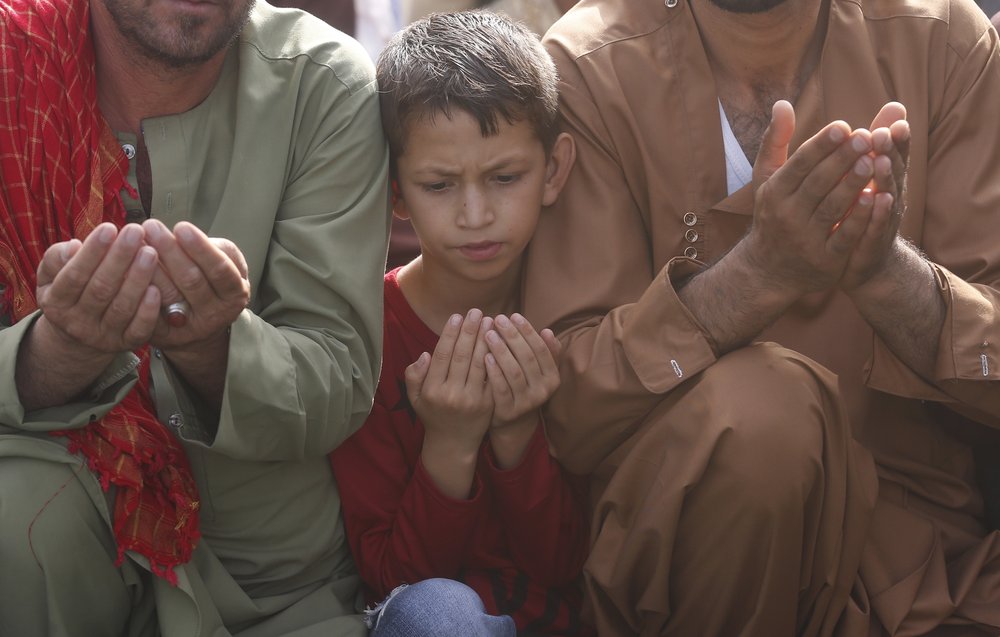 Afghan Muslims attend Eid al-Adha prayers in Kabul, Afghanistan, Sunday, Aug. 11, 2019. Muslim people in the country celebrate Eid al-Adha, or the Feast of the Sacrifice by slaughtering sheep, goats and cows whose meat will later be distributed to the poor.(AP Photo/Rafiq Maqbool)

KABUL, Aug 11: Afghanistan’s president on Sunday rejected foreign interference as the United States and the Taliban appear to be closing in on a peace deal without the Afghan government at the table.

President Ashraf Ghani spoke during the Muslim holiday Eid-al-Adha and as U.S. and Taliban negotiators continue their work in the Gulf nation of Qatar, where the insurgents have a political office.

Speaking after the Eid prayers, Ghani insisted that next month’s presidential election is essential so that Afghanistan’s leader will have a powerful mandate to decide the country’s future after years of war.

“Our future cannot be decided outside, whether in the capital cities of our friends, nemeses or neighbors. The fate of Afghanistan will be decided here in this homeland,” he said. “We don’t want anyone to intervene in our affairs.”

U.S. envoy Zalmay Khalilzad is seeking a peace deal by Sept. 1, weeks before the vote. The two sides are expected to agree on the withdrawal of some 20,000 U.S. and NATO troops in return for Taliban guarantees that Afghanistan would not be a base for other extremist groups.

Few details have emerged, but Khalilzad and the lead Taliban negotiator, Mullah Abdul Ghani Baradar, have been traveling in recent days to brief several countries involved in the process on the latest developments.

The Taliban spokesman in Qatar, Suhail Shaheen, who has said a deal is expected at the end of this round of talks, on Sunday issued an Eid message expressing the hope that Afghanistan “will celebrate future Eids under the Islamic system, without occupation, under an environment of permanent peace and unity.”

The Taliban have refused to negotiate with the Afghan government, dismissing it as a U.S. puppet, and on Tuesday they declared the Sept. 28 election a “sham.” They warned fellow Afghans to stay away from campaign rallies and the polls, saying such gatherings could be targeted. A day later the group claimed responsibility for a suicide bombing that targeted security forces in Kabul. The attack killed 14 people and wounded 145, most of them civilians.

The Taliban control roughly half of Afghanistan and are at their strongest since the U.S.-led invasion toppled their five-year-old government in 2001 after the group had harbored al-Qaida leader Osama bin Laden. More than 2,400 U.S. service personnel have died in Afghanistan since then.

Ghani, stung by being excluded from the peace talks, on Sunday pleaded for national unity.

A peace deal would be followed by intra-Afghan talks, but it is not clear whether the Taliban would agree to talk to Kabul government members in their official capacity or only as ordinary Afghans, as in the past.

The U.S. and NATO formally concluded their combat mission in Afghanistan in 2014. The American and allied troops that remain are conducting strikes on the Taliban and the local Islamic State affiliate, and working to train and build the Afghan military.

President Donald Trump has publicly expressed his exasperation with America’s continued involvement in Afghanistan and a desire to bring troops home.

No decision on home ministry leadership until full text of SC’s verdict on Rabi Lamichhane is out: PM Dahal
34 minutes ago

Pokhara-Baglung Highway to be closed for upgrading
51 minutes ago