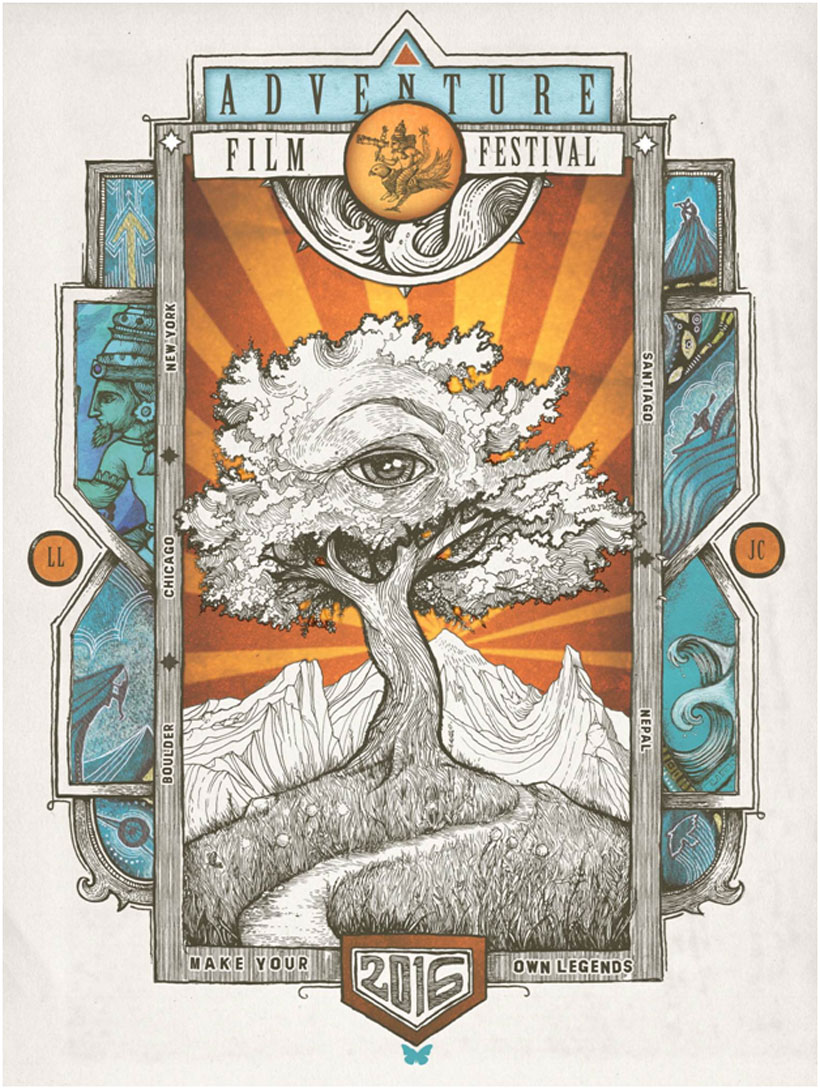 Based in Boulder Colorado, Adventure Film Festival (AFF) is an international forum for the best and most inspiring independent films of the year. The Festival encompasses all aspects of adventure from serious exploration to environmental heroism to gripping tales from the edge of the believable. Adventure Film’s compelling line-up is handpicked by a dedicated, Boulder-based selection committee from over 350 entries submitted from all over the world. With the support of filmmakers, sponsors, non-profits, partners, volunteers—all adventurers —Adventure Film Festival will feature the 2016 award winners on a World Tour traveling from Boulder to Chicago, New York, Seattle, DC, Richmond, Santiago, Nepal, Israel, and several major cities in between.

The Adventure Film Festival was created in 2004 by the legendary climber, photographer and storyteller Jonny Copp (1974-2009). It all started as a dream in the heart of the Himalayas. In a tent during a storm, on a handful of scratch paper, Jonny sketched out his vision of a community-based, mission-oriented, outdoor adventure festival that tied indie film with art and activism. Jonny believed in the power of storytelling, especially through the narrative of adventure, with the goal to awaken change and encourage others to challenge and improve the world we live in.

Could you give an explanation regarding your role in it?

Having close connections with the Adventure Film Festival Team in Boulder, and the support of the Festival Director Aimee Copp, I have been playing the leading role in bringing this international festival to Nepal.

This festival is being jointly hosted by the Himalayan Outdoor Festival and Himalayan Hammock. Himalayan Outdoor Festival team has been organizing a three-day celebration of human powered adventure sports, music and Himalayan lifestyle for the past five years. Our goal has remained the same; to get more youths into adventure sports, provide a platform for emerging talents and to promote the outdoor culture with the hopes that as more youth get involved, they will take care of the area they ride, rock and camp.

The festival over the years

Jonny Copp was known worldwide for his cutting edge first ascents of the steepest walls and mountains around the world.

His life was short lived, when he was caught in an avalanche in China while attempting a first ascent. His contribution to the world was remarkable and touched the lives of all those who surrounded him. His family, friends, leading outdoor companies and non-profits rallied together to give continuity to the festival. Today this festival continues to inspire a global audience.

The impact of the films showcased

We believe in the power of the story, the narrative of adventure and awakening. We believe we have an opportunity and responsibility to challenge and change the world we live in. The films that we’re going to showcase are from all around the globe, covering many topics. Even though the films are based in some far-off land, I hope we can each find a way to relate to it. I hope through these films, audiences will walk away inspired to get out, explore more and often, climb harder, ride faster all while respecting and caring for our planet. We have an amazing lineup of adventure films that will keep you at the edge of your seat.

We definitely hope to continue hosting Boulder, Colorado’s Adventure Film Festival here in Kathmandu in the future. We also hope to get more national and international athletes, film makers, and environmental heroes involved. At our annual Himalayan Outdoor Festival, which is running on its fifth year, we hope to add an adventure film segment where people can submit their documentaries or short films. These will go through a selection process and with approval from the Adventure Film Festival team back in Boulder we hope to showcase those films to an international audience.