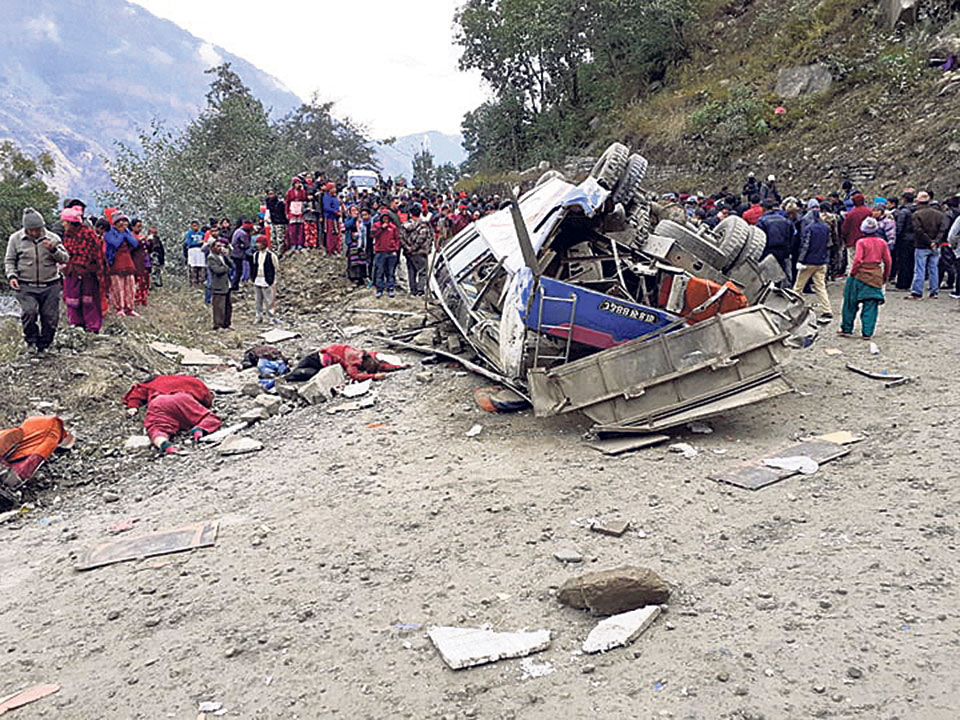 Onlookers crowd the scene of Sunday morning’s bus accident at Chha Kilo in Sunkoshi Rural Municipality of Sindhupalchowk district. At least 15 people were killed and 19 injured when the bus which was on its way to Bhaktapur plunged from the road. All the deceased were returning to Bhaktapur after a pilgrimage to Kalinchowk Bhagawati Temple in Dolakha district. Photo: Dhruba Dangal/Republica

BHAKTAPUR, Dec 16: All 15 passengers killed in Sunday’s bus accident in Sindhupalchowk and the 19 injured were residents of Adarsha Tole in Bhaktapur district. They had headed for Kalinchowk from Adarsha Bus Stop, Bhaktapur at 3 am Saturday. The locals are in deep shock after learning about the tragic accident.

Although most of the injured and deceased were originally from different districts, they had been living in Bhaktapur of late.

Prasana Lama, a local of Adarsha Tole, said that she couldn’t work the entire day on Sunday after hearing about the incident. “How could I work when so many people from our community died?” she said, adding that all the locals are in deep sorrow.

Reshma Tamang, who works at Buddha Carpet, had travelled to Kalinchowk with her three daughters Anjana, Sabina and Roshani. Her seven-year-old daughter Sabina died in the accident.

Buddha Laxmi Lohala, proprietor of Buddha Carpet, said that she couldn’t control her tears after knowing that Reshma’s a year and a half old daughter was also injured in the accident.

Likewise, Kanchi Maiya Chikbanjar, a local, said that all the deceased were from Bhaktapur. “I knew all the deceased personally, and I couldn’t control my tears after the accident,” she said, adding that she was also planning to travel to Kalinchowk with the same group.

She didn’t travel after her daughter told her that the road to Kalinchowk was slippery due to snowfall.

TANAHU, Jan 10: Two people killed and 17 others sustained injuries when a passenger bus met with an accident at... Read More...

DHADING, April 21: Two persons died on the spot and 10 others injured when a passenger bus met with an... Read More...

TIKAPUR, Sept 14: Two people were killed in a vehicular accident that occurred at Balchaur of Lamkichuha Municipality-3 on Friday... Read More...