Acting Chief Justice says win-win for both sides through mediation 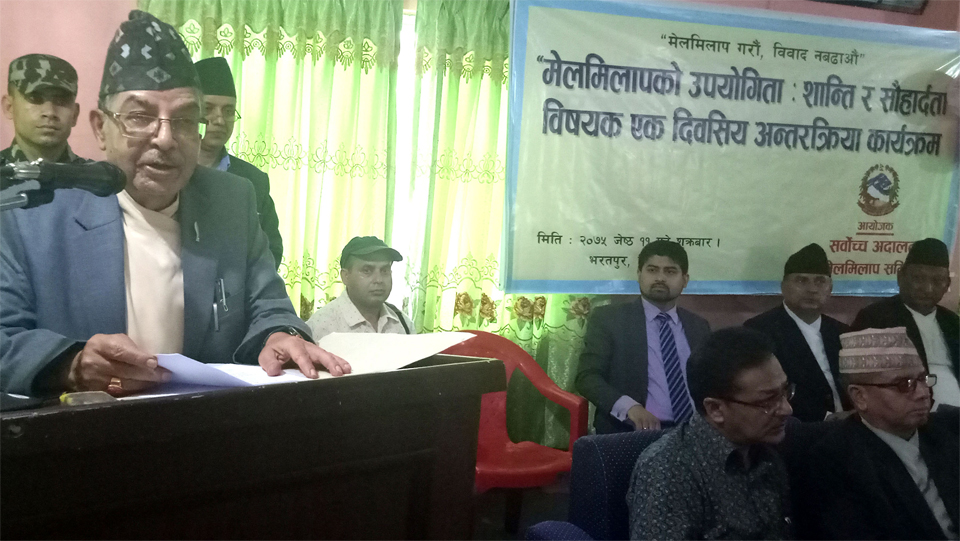 CHITWAN, May 25: Acting Chief Justice of the Supreme Court Deepak Raj Joshi has said both sides of a disputed win if the dispute is resolved through mediation, arguing that this is so because both sides themselves decide on their respective issues.

Addressing a program of interaction entitled 'Usefulness of Mediation: Peace and Goodwill' organized by the Supreme Court, Mediation Committee on Friday, he said these days mediation was also considered in the judicial circle as an exception to the notion that one could not be an arbiter in a case that is related to that person.

The Acting Chief Justice noted that the formal mechanism has also given special priority to mediation among the various informal mechanisms of dispute resolution such as dialogue, negotiation, and mediation.

Stating that the system of mediation has been adopted in Nepal on various ways, he said although the traditional process and some traditional practices of dispute resolution practiced by various communities and castes are not legally recognized, they have been employed as informal mechanisms to resolve disputes.

The Acting Chief Justice, who is also the Chair of the Supreme Court Mediation Committee, said that the courts would encourage mediation and would in the long term adopt mediation as a means of dispute resolution as far as possible.

He opined that the legal status and recognition of mediation has taken a new height in the actual sense after the Act on Mediation, 2068 came into effect five years back.

"It is seen that the practice of the courts forwarding the sides of the disputes that can be addressed through mediation for resolving the dispute by this means is on the increase," he said.

Acting Chief Justice Joshi viewed that no other decision than the decision taken by the sides to a dispute and cases of civilian nature like personal disputes through consent and consensus could be more practical and mature.

He said the effectiveness and the popularity of mediation was also growing in the recent days through continued practice of this method by judges, law practitioners, people associated with the judicial sector and all the stakeholders.

ITAHARI, July 5: Nepali Congress (NC) has won both the chief and deputy chief in Koshi Rural Municipality in the... Read More...