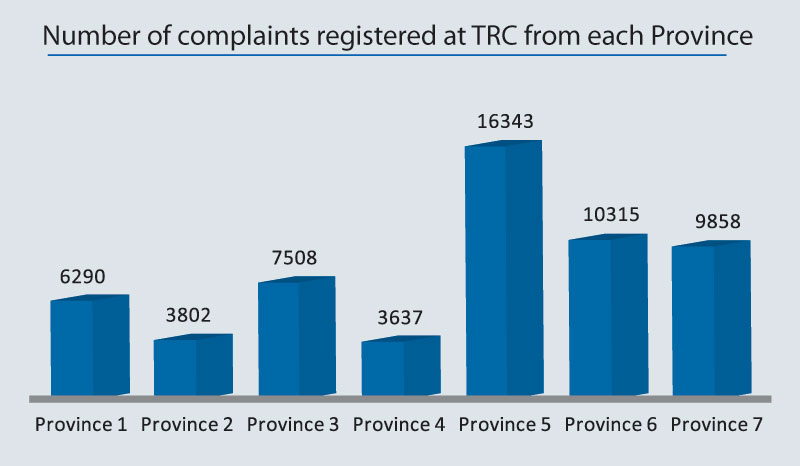 Settling all 57,753 complaints challenge for TRC even if term extended by a year
TRC proposes setting up investigation stations in all seven provinces
Commissioners feel lack of cooperation from authorities
KATHMANDU, Nov 19: With just two months remaining in its term, the Truth and Reconciliation Commission (TRC) has not been able to conduct substantive investigations into conflict-related complaints due to delay by the government in amending a crucial Act.

Though the government has been claiming that the Commission of Investigation on Enforced Disappeared Persons (CIEDP) and TRC Act would be amended soon by incorporating the verdicts of the Supreme Court on transitional justice, the government has yet to bring an amendment bill in parliament. The original term of the commission expires on February 10.

On the other hand, commissioners at the TRC also lament that they are facing a funds crunch as their proposals are stuck in red tape at the Ministry of Finance. The commission receives funds only after its programs are sanctioned by the ministry.

"From the very first day, we asked the government for regulations. It took almost a year to finalize the regulations. We have also been asking for amendment to the the existing Act but we are still unaware where the amendment process is stuck. On the other hand, the commission's every financial proposal for taking forward the investigation has to be endorsed by the Ministry of Finance and this takes time," said Shrikrishna Subedi, a commissioner at the TRC.

"This entire scenario has raised suspicion within the commission that a ploy to make the existing commission a failure has been hatched from all corners," he added.

Although only two months remain in its term, the commission has proposed setting up one investigation station each in the seven provinces of the country and forwarded the proposal to the Ministry of Finance. But the ministry has yet to endorse the proposal.

The commission meanwhile is being criticized from various quarters for focusing on administrative works instead of beginning investigations into the complaints.

"We need investigation stations to take ahead the investigation work. We want to set up such stations also in the districts with maximum number of complaints," Subedi said.

Monday marks the 10th anniversary of the signing of the Comprehensive Peace Accord between the government and the then rebel Maoists.

KATHMANDU, Feb 11: While criticizing the government for its failure to grant real powers to the Truth and Reconciliation Commission (TRC)... Read More...

KATHMANDU, Aug 31: Chairman of the Truth and Reconciliation Commission (TRC) Surya Kiran Gurung has warned that he will not... Read More...