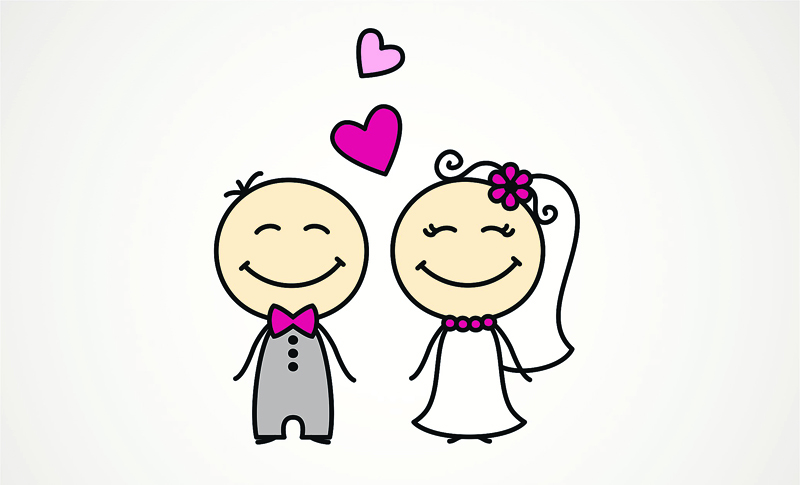 Sandhya Yonzon was 28 years old when she accepted a ring from her boyfriend. When she did, she had no clue that she was now somebody’s fiancée. She thought he was being cute and showing her that he was serious about her, not actually asking her to marry him, because an engagement in her culture was so different and extensive, and included both the families in the process.

“My first reaction to the ring was that I didn’t like it. I wanted to get it changed and the two of us spent two weeks looking for another one with no luck,” says Sandhya. She finally knew what the ring truly symbolized when she told her friends about the ring hunt. At first she couldn’t understand why they were shocked and then it was she who was mortified. It was around this same time that she realized that her family didn’t even know she had a boyfriend.

Stories like this highlights how even with all the love that binds them together, inter cultural love marriages come with a set of challenges of their own. Although we don’t really want to see it when we are in love, our culture shapes us into who we are and how we see the world. A simple example can be found in the simplest of eating habits, some cultures don’t eat beef, some are expected not to eat buff either, and some don’t eat pork. And if it’s hard to adjust to eating habits, having to adjust in little thing in life is much harder.

“In our culture, marriage is a bond between two families and not just two individuals,” says Ganga Pathak, PhD in psychology, and chief psychologist at National Institute of Psycho-Educational Counseling. Therefore a lot of issues arise when two people of differing cultures marry and live with the extended family. There are certain expectations from both the newlywed daughter-in-law and in-laws. Both of these expectations sometimes don’t meet due to the differences in the culture, which can sometimes result in conflict.

Binita Maharjan fought a long and hard battle to be with the man she loved. Her traditional Brahmin family didn’t want her to marrying into a Newar family. “When my family finally agreed to let us get married, I thought the war was over. Little did I know that in marriages where you come from different cultures, your whole life will be a battle,” she says.

She was told, by a member of the extended family the day she got married, that she had to wake up in the morning along with her in-laws and touch their feet and that this was to be repeated in the evening too. She was shocked to find out that her in-laws woke up at 4 am every morning, without fail. Not only did she have to do that, she also had to light the batti and do puja in front of the door of the house, in the front lawn. All this was something she wasn’t familiar with and she discovered that she was drowsy throughout the day due to this and that she wasn’t as aware or efficient as she used to be.

Before getting married she led a completely different life. She would wake up at eight, have breakfast and leave for work. This new life was a sudden big change, one, she realized, she wasn’t prepared for. After falling sick a couple of times, she finally decided to tell her husband to do it instead. “When I did, as lazy as he is, he refused to wake up, laughing and telling me that it’s my duty,” she says. A medical officer herself, she knew that the lifestyle, the food and the system at which the household operated wasn’t working for her and that was why she was having such a hard time to adjust, and she decided to pay Pathak a visit.

“The day she came in, all she did for an entire session was cry and said that she thought she had made a terrible mistake,” says Pathak. Her biggest complaint was that the family was constantly undermining her abilities and her knowledge of their cultural system. If she did anything wrong, the first words she would hear were ‘yo bahuni lai k tha’. They might have meant it in an endearing way to dismiss her lack of cultural knowledge, but these careless words hurt her anyway.

It’s commonly women who have depression after inter caste marriages since their lives change so much. Lives for men don’t change as much. “Their daily activities stay more or less the same, and some forget to consider the fact that their spouse is going through a big cultural shock,” explains Pathak. For couples who seek help, she suggests big family meetings so that there is no space for misunderstandings to fester.

Life abroad isn’t this hard though, Sandhya claims. Everyone is so used to speaking in English that nobody speaks in their mother tongue, Chinese in her case, infront of her, and the differences between the cultures aren’t as stark. At first, when she told her parents about the engagement, they didn’t want to hear about it at all. They didn’t want a foreigner as their son-in-law. And they didn’t want anyone to think she only married to get an Australian citizenship.

However, she found a way to get around it when they visited her. She made sure they spent as much time together as possible. While returning to her place from the airport, for the entire duration of the journey her parents were talking to her fiancé, Sebastian, in Nepali. His features made them think he was one of their own. “Even though he couldn’t really understand anything, he kept smiling and nodding, and my parents just thought he was shy. We didn’t make eye contact in case we burst out laughing and I answered all the questions my parents threw his way,” she recalls.

But when her parents proceeded to speak in Nepali at home as well, she finally told her parents that he was, in fact, Chinese. By then, the ice had broken and he took her parents out on city tours and camping trips, even when she was at work or otherwise engaged, winning over the parents little by little. By the end of their six-month long trip, they knew there would be no better man for her and agreed to the wedding.

Similarly, breaking all stereotypes of the female struggle, Tribikram Dawadi too had to fight his family to get married to the woman he loved. His orthodox Hindu family didn’t want to hear about his cousin’s Newar girlfriend, let alone his Mexican one. They started out as friends, but even when he looked at a lot of other ‘parents approved’ girls for marriage, he found himself comparing everyone to Maria, and realized that she was the one for him. Matters became complicated when his parents too migrated from Nepal.

“It’s a lot harder to defy them and go against their wishes when they were right there,” he explains. All communication with his father stopped because he disapproved. His mother, at least, was slightly open to the idea of a foreigner daughter-in-law. But even then, it wasn’t just his parents that were looking for someone ‘appropriate’ for him. All his other relatives too were put to the task of finding a match for him, least he stray off the beaten path. “It was like old age Tinder and I swiped left for each of the girls that they wanted me to marry,” he says.

Now that they are married, Maria even has an official Nepali name as her family did her ‘nwaran’ as well, and goes by Pooja at home. Although a little jarring for her, she has embraced the culture and lifestyle whole heartedly and is happy to finally be with him. “Although my mother and my wife get along with each other, I think the fact that there is a language barrier will come in the way of them really understanding the other,” says Tribikram. He hopes that once his father sees how happy they are, he too will come around and things will eventually fall into place.

However, cultural similarities don’t automatically mean a successful marriage. “Marriage is hard work,” says Pathak adding that how a couple’s married life will be depends on the couple and their ability to communicate effectively. It’s not how they were raised, what kind of food they eat, which language they speak, and other ‘trivial’ issues that matter.

KATHMANDU, March 2: Except for the accidental death of a minor, the Holi festival, which is also known as the... Read More...

BHAKTAPUR, March 16: The Secondary Education Exam – the transformed examination of School Leaving Certificate – has begun throughout the... Read More...

Landslides threaten many settlements across Pyuthan

PYUTHAN, Aug 9: Landslides are quite common in Pyuthan. Over the last two and half decades, they have claimed many human... Read More...