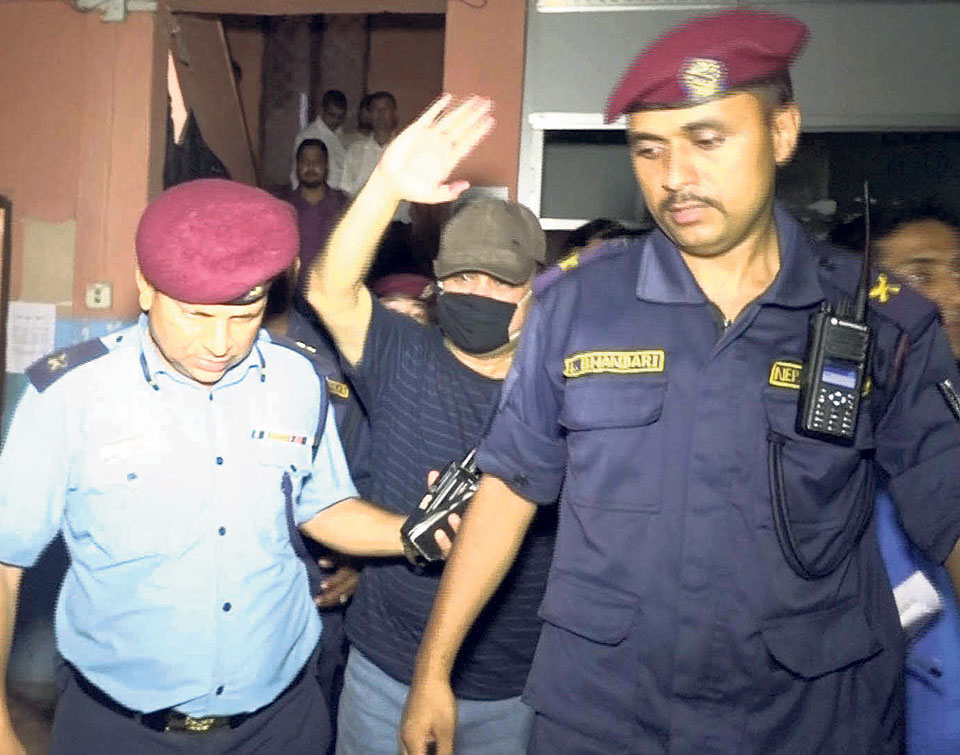 Nepal Police Senior Superintendent Shyam Khatri (in black mask) being escorted out of the District Court Morang on Thursday. The court has sent him to judicial custody.

Absconding Khatri, who has been accused of smuggling 38 quintals of gold during his posting at TIA, surrendered before the court Thursday morning after others said he was largely involved in clearing smuggled gold through the airport  while they themselves were limited to a supporting role.
Chudamani Uprety aka Gore, another accused in the smuggling, had accused Khatri of handling the entire gold smuggling operations.

During his interrogation this past week, Gore  disclosed that he was simply working as a tracker to monitor the ‘porters’ who smuggled the gold for Indian businessmen. He fingered SSP Khatri as being one of the main local agents in the smuggling. The gold used to go directly to  Khatri’s chambers, according to Gore.

Also, SSP Khatri was accused of charging Rs 50,000 per kg for clearing the smuggled gold through TIA, where Khatri was the chief police officer. Gore  also mentioned that 400-500 kg of gold has been smuggled into the country with the involvement of Khatri.

The court  recorded his statement immediately after he surrendered. In his 12-page  interrogation statement, Khatri refuted allegations leveled by Gore and the other accused. “I had scolded Gore when he approached me and that’s why he is linking my name to the scam,” Khatri reportedly told court officials.

At the preliminary hearing, government attorney Punya Prasad Pathak claimed that SSP Khatri was found involved in organized crime by assisting gold smuggling groups. The attorney claimed that Khatri had received more than Rs 20 million from Gore for channelizing  gold from the airport.
SSP Khatri, who was implicated in gold smuggling cases in the past as well but managed to get acquitted,  absconded soon after the others accused in the scam stated that he had assisted in channelizing around 38 quintals of gold. Nepal Police had issued a diffusion notice with the Interpol for Khatri’s arrest.

Gore had alleged that Khatri  used a government car and driver and his body guard to assist the gold smugglers. A special probe committee formed under Ishwar Raj Paudel, joint secretary at the Ministry of Home Affairs, had arrested Gore from Kathmandu on May 22. He was then taken to  Morang District Court, where  case has been filed against 63 individuals including him.

DHANGADHI, Feb 27: The District Court, Kailali on Monday sent Resham Lal Chaudhary, who is accused of masterminding the the 2015... Read More...

SSP Khatri released on bail, 7 others sent into custody

Corona-infected lawmakers, too, can cast their votes as PM Oli seeks vote of confidence in parliament tomorrow
9 hours ago