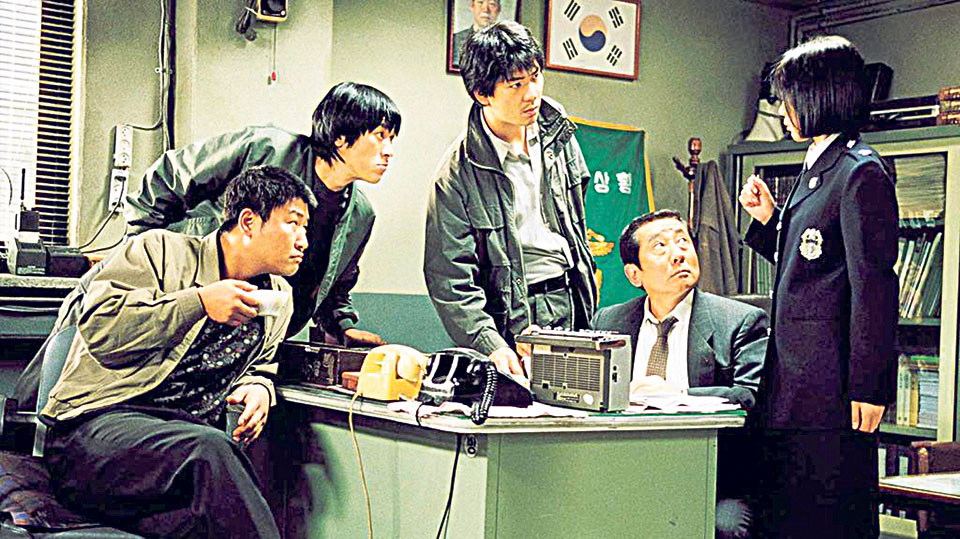 Personally speaking, I’m not a fan of thrillers. Someone on a killing rampage, people being hunted down and explicit violence and chaos make me feel a little too nihilistic. Also, the whole blood and gore and hide and seek routine that make up most thrillers fail to impress me. But now, I can say that there is one exception. And that is Bong Joon-ho’s 2003 crime drama Memories of Murder.

The film is unlike most films about a serial killer on the loose. It’s strangely subtle and quiet (maybe the closest comparison of subtleness would be David Fincher’s Zodiac). There are no scenes with loud, deafening music where the killer is chasing a person as the person drags his/her wounded body, pleading for mercy.

It’s got that realness to it that feels foreign at first (as we are so used to films making things more dramatic than in real life) but becomes really refreshing afterward. If you think about it, even in the darkest of times in a person’s life, things seem pretty normal from the outside, even if there is a storm brewing in their minds.

There’s a serial killer on the prowl in the countryside in Korea in autumn of 1986. While the countryside is glistening with the pale yellow and golden trees and grass, everything seems blissful, except when it rains and one particular song plays on the radio. That’s when women wearing red colored clothes are found raped and murdered in unsuspicious places around the small, unnamed town.

Local detective Park Doo-man is tasked with solving the case and, being a small-town detective, it’s pretty evident that he is unqualified to solve a case like this. In the first murder itself, the key evidence is improperly collected, his investigative methods are inadequate, and the forensic technology is almost non-existent. Moreover, Doo-man claims he can find the killer by simply gazing deep in his eyes and he tries that with the initial suspects (with no success, of course).

Doo-man arrests a scarred mentally handicapped boy, Baek Kwang-ho, who allegedly followed the first woman who was killed just about everywhere. To quickly close the case, Doo-man and his partner beat the poor boy up and force him to confess.

By then, however, the first murder has effectively shocked the town dwellers, so much so that another detective is brought in from Seoul. The new detective, Seo Tae-yoon, dismisses Doo-man claims that Kwang-ho is the murderer and they get into a clash due to their differences in their approach to the crime. But then, in the following rainy nights, several murders (who just happened to wear red and walking alone) take place and they both realize that they are dealing with something far more sinister.

In the story, Doo-man is really desperate to solve the murders but he just isn’t smart or diligent enough. On the contrary, Tae-yoon is observant, intelligent and equipped to solve a case like this. But due to one thing or the other, each time they come very close to finding the killer something goes wrong and the film ends with the case remaining unsolved.

The entire story is actually based on South Korea’s first documented serial killer Lee Choon-jae who was responsible for over 10 rapes and murders that occurred in the city of Hwaseong between September 15, 1986, and April 3, 1991. The case remained unsolved at the time as there was no proper DNA-identifying technology in Korea back then (which is also an important part of the film). However, the case was finally solved in 2019, almost 25 years after the incident occurred.

The film, all the while looking so colorful and bright, has the capability to send chills down your spine. The subtle slow camera movement when we are seeing things from the killer’s perspective as he hunts for his next target was so well executed that I was forced to pause for breath because of that overwhelming feeling of fear and mixed emotions.

And in true Bong Joon-ho fashion, even though the film is a crime drama that deals with a serious issue, some scenes in the film bordered between a comedy and tragedy (like a man wearing red lingerie and “visiting” the murder scene). But then, is it a Bong Joon-ho film if the film doesn’t make you feel like you will be sent to hell for laughing over things you shouldn’t?

All in all, the film not only has all the crime/thriller nuances that attract so many people to this genre but also asks the viewers to assess how the police and the people (both in the past and in the present) go about dealing with similar cases. It showcases the biases in human judgment, the hierarchical system in society and within a system, police brutality and the pure evil that pushes people to commit heinous acts of crime. But, when it ends, the film offers no conclusion or closure. It simply tries to encourage viewers to make judgments of their own about the complexities of human behavior and life in general.

Sindhuli faces a rise in incidents of domestic violence

SINDHULI, Dec 2: The Sindhuli district is witnessing an unprecedented rise in the registration of cases related to domestic violence. Read More...