A taste of Japan

Tucked away in a quite corner at Freak street in Basantapur is probably one of the best Japanese food serving stations in town. Japanese Food Takoyaki SOLO has been serving authentic Japanese street food plus sushi for just over a year but it has already gained a devoted set of customers who come quite regularly to indulge in the various Japanese delicacies that it’s popular for in the short time it has been in operation.

When I reached the restaurant a little past noon, battling the scorching heat, I was hungry and I wanted some good food. I have to say Japanese Food Takoyaki SOLO didn’t disappoint. Our host for the day, Binita Lama, who runs the quaint restaurant, along with Srijana Giri, gave us a warm welcome. She then told us that the restaurant was owned by her uncle, Kaju Tamang, who had started it with help from his Japanese wife, Yoechi Aoki, and her family. She said Tamang felt the need for an authentic restaurant devoted to serving popular Japanese street food in Nepal.

The restaurant itself is pretty small but they have been able to make the most out of the space. The ceilings are colored white and red, symbolizing the Japanese flag. The overall decor could be described as warm yet chic, thanks to the tall wooden stools and wall mounted wooden tables. Add to this some colorful fans, as well as artworks (mostly anime), brought in by the customers themselves and you have a space that’s quirky too. And finally, handmade Japanese Gourd lamps add an extra charm to the decor and it also makes for a beautiful sight as the sun sets and the lights are turned on.

The food is cooked inside as well as outside the restaurant. As SOLO are serving street food, the cooking region outside carries the essence of being served street food where you can see your food being made, just like how we see our local street vendors make us “chats” and “chatpates”. Moreover, ingredients that are native to Japan like fish flakes are brought in from Japan, the octopus for the takotaki is brought in from Thailand and SOLO makes its own takoyaki sauce.

After ordering some iced tea, we tried their bestseller – the takoyaki (Rs 100). Takoyaki is made on a special pan called the takoyaki pan and “tako” means “octopus” whereas “yaki” comes from “yaku” which means “to fry or grill”. The batter for takoyaki consists of flour, eggs and fish powder. This is poured into the takoyaki pan and minced octopus is added to it. After that, it’s cooking and rotating the batter in the pan (which is simply art) and soon the fluid batter takes shape into a delicious looking ball. Topped with takoyaki sauce, mayo and other sauces, it was crisp on the outside and gooey on the inside. It had a subtle savory taste, blended very well with the sauces and was absolutely delicious.

Next up was sushi and nothing can ever go wrong with sushi. The sushi (Rs 450) was complemented by miso soup and wasabi. The seaweed perfectly wrapped the rice, fresh veggies and salmon furikake and it made for a fresh little dish. It had a creamy, chewy texture and was easy and fun to eat. The wasabi was there if one needed some extra “punch” and the miso soup was warm and flavorsome. SOLO also gives one the option to order either miso soup or wakame soup as most of us Nepalis have yet to develop a taste for the miso soup. However, as the sushi is made fresh everyday, it’s only available after 1:30 pm.

After that, we had the omusoba (Rs 180). The omusoba is basically noodles wrapped around in an omelet and drizzled with sauce. Served on a wooden plate, it’s just as fun to see it being made as it is to eat it. The noodles are fried with fish powder, flour, cabbage and tenkasu that are crunchy bits of deep fried flour-batter. The noodles were well coated in the sauce and the omelet added a creamy texture to the dish. The portion is more than enough for two people and one can enjoy it slowly – there’s no need to rush to finish it before it gets cold. It tastes just the same.

The final dish for the day was okonomiyaki (Rs 450). The dish is pretty heavy so you might need some company for this one. Okonomiyaki is a Japanese savory pancake containing a variety of ingredients. The glory of the dish is that you can add in whatever you like, “okonomi” meaning “how you like” and “yaki” meaning “cooked”. In this rendition of okonomiyaki we have flour, eggs, sausages, cabbages and different sauces all topped off with fish flakes. Every spoonful has a mixture of noodles, sausages, eggs and flakes. But then again, you have to share this dish so take a friend along and don’t order it if you are alone.

Even though SOLO serves only four dishes they have put quality over quantity and it is evident from the taste as well as the presentation of the food served there. It is a lovely little place worth a visit as it brings a glimpse of the Japanese life into our own Nepali streets while letting us indulge in some very good food. 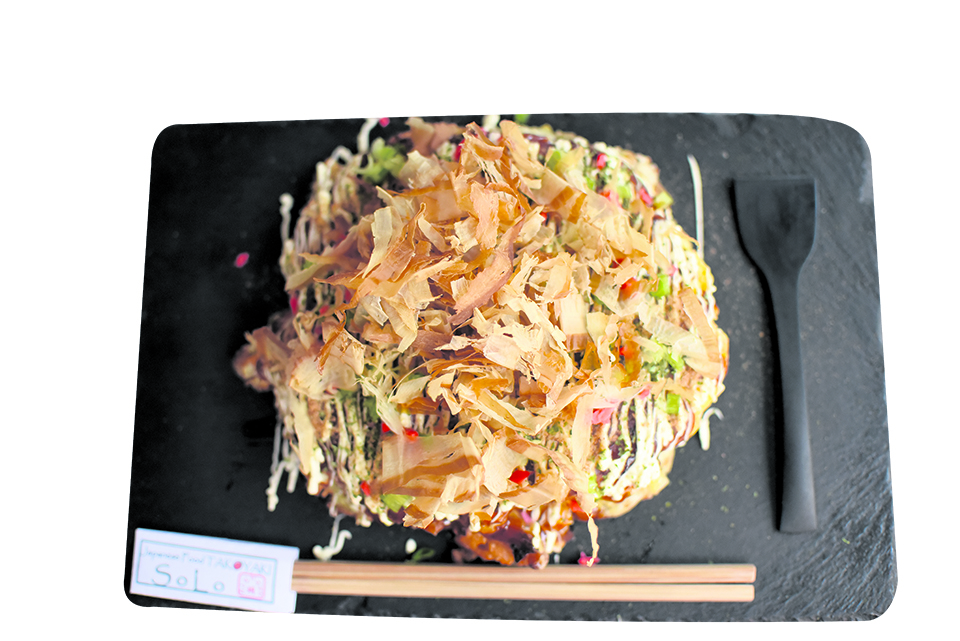 JAJARKOT, July 18: Locals in the district have been hit-hard as the government has not supplied the announced quota of... Read More...