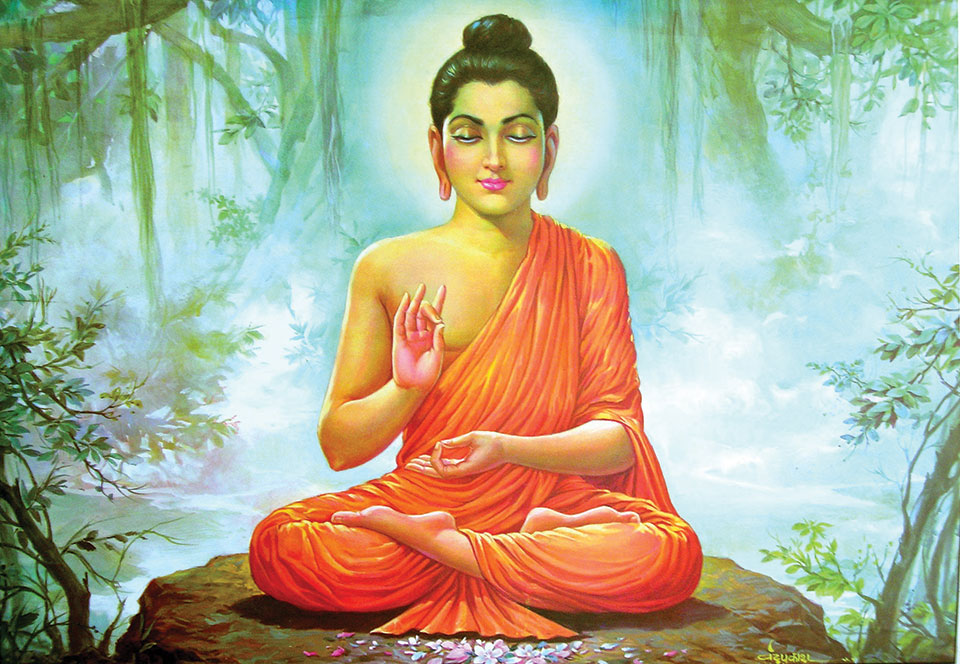 As a tribute to Buddha, Nepal should propose Buddha Purnima as International Day of Meditation at the UN and start celebrating it from this year

2563 years ago on the full moon of Baisakh, Prince Siddhartha Gautam was born in the forest garden of Lumbini. On the same day after 35 years, he attained enlightenment on the bank of Niranjana River in Bodhgaya under the Peepal tree and at the age of 80 he left his body and attained Mahaparinirvana on the same day under the two Sal trees in the forest of Kushinagar.

All these three events took place on the full-moon of Baisakh. Thus, the full moon of Baisakh or Buddha Purnima holds a great significance. Every individual comes with the immense possibility of becoming a Buddha and with the practice of meditation anyone can attain Buddhahood was the main teaching of the Buddha.  This is why as a tribute to the contributions of Buddha, Nepal should  propose this auspicious day as International Day of Meditation at the United Nations and also start celebrating it nationally from this very year by declaring it from Lumbini.

Perched on the laps of great Himalayan range, Nepal has been home to many seekers, hermits, yogis and meditators down the ages. From time unknown the great Himalayas have provided shelter and inspiration to millions of seekers on the path of truth. This region gave birth to the concept of a one world family Vasudevam Kutumbakam and also to the philosophy of empathy and compassion preached by the great Upanishads: 2563 years ago, this very region also gave birth to Gautam Buddha. Buddha is the first religious historical figure whose birth is not clouded by mythology and fiction and there is no conflict about his birth place, the place of his enlightenment and the place of his Mahaparinirvana. Buddha professes the path of peace in which he has given the solution for our sorrows and how to liberate from them. Buddhism flourished from Nepal and spread across India to China to Japan and it is a historically known fact that Nepal gave refuge to thousands of Buddhists when Buddhism was attacked in India.

The path of Buddha constitutes mainly three steps: Sheel (morality), Samadhi (meditation) and Pragya (right wisdom). Buddha taught that with the practice of these three one could be liberated from the sorrows of life. Today, the world has come to a turning point and never in the history of mankind has the need for peace been so essential. The Buddha and his teachings have never been so relevant. Despite the abundance of material comfort achieved by science and technology, humans are still not happy and peaceful. The world has already seen two great world wars and in the aftermath it saw the explosion of atom bomb in Hiroshima and Nagasaki. Science that can procure great welfare and benefits for the humankind is moving ahead in the wrong direction with an alarming possibility of destruction. The same science that was developed by the humankind has made the human beings restless, stressful, depressive, and insomniac.

Doctors say that 80 percent of physical diseases are rooted in the mind. The cause of physical illness originates in the mind and similarly the impact of psychological illness is seen on the body.
The 21st century has today metamorphosed into the century entangled with stress, hyper tension, heart diseases, diabetes, insomnia, depression and hundreds of other psychological diseases. According to WHO, in every 40 seconds a person commits suicide in the world. The actual numbers exceed the official data. According to the findings of a research, in American colleges today, amongst every 1000 students 150-240 students are in need of immediate psychological assistance. University counseling centers are now seeing more students who come to college with preexisting conditions of depression and other mental disorders. The number of students who need treatment or follow-up services for mental health conditions has increased dramatically in the recent years. In 2001, an increase in severe psychological difficulties was reported by 85 percent of the counseling center directors participating in a national survey in the US. In the decade between 1989 and 2001 the following increases among college students were reported: The number of cases of documented depression doubled, the number of suicidal students tripled, and the use of psychiatric medications increased by 15 percent.

In the US, 20 percent women and 15 percent men are victims of sex abuse. Psychological illness and unnatural human tendencies have impacted every aspect of our lives. The alarming rise in terrorism, human conflicts and suicides are some of the consequences of this imbalance in human psychology.

Meditation benefits
Meditation has today sprung up as a permanent antidote to these sicknesses of the human mind. Yoga and meditation can no more be confined to geographical and religious boundaries. It can no more be attached to a particular religion or sect. It is a pure scientific technique that helps to keep the mind calm and silent. It is also a method to cure different diseases of the human psyche. The growing popularity and global recognition of meditation bears an articulating testimony to this fact. Universities in developed nations are conducting in-depth researches and study to understand meditation and its implications. Today every year more than 500 research papers are being published about meditation.

The modern man suffers from countless psychological diseases and the number of patients is increasing every day. Today doctors, psychologists and socialists have all come to the agreement that meditation is only accurate solution with no side-effects to this problem. There is a great rise in the global interest in meditation and yoga and nowadays yoga and meditation have started finding place in the medical prescription as well. Today, yoga is also a growing economic industry. Thus it is high time to spread meditation around the world and make it a global lifestyle. According to a research by IBISWorld in 2015 the meditation industry raked in nearly $1 billion and today there are more than 1000 smart phone apps that help you to meditate. In this context of growing popularity and global demand, celebrating and recognizing Buddha Purnima as International Day of Meditation will prove as a historical milestone.

Meditation strengthens our focus and concentration. It helps in reducing tension, anxiety, and stress. It makes our thinking process clearer and lessens emotional turmoil. Meditation has proven very effective in lowering blood pressure and cholesterol. It has proven as a great support in kicking addictions and other self-defeating behaviors. Meditation enhances the creative skills in a person and increases one’s performance in work and play. It increases self-understanding and self-acceptance and brings more joy, love, and spontaneity in one’s life. Meditation not only strengthens our bonds and connection with our friends and family members but also helps a person to have a deeper sense of meaning and purpose in life. And most importantly meditation helps us to attain to the ultimate peak of human consciousness, the final Nirvana.

For the last two years I have been suggesting in different conferences, gatherings, and media and during my meetings with the policy makers that Buddha Purnima should be marked and celebrated as the International Day of Meditation at the United Nations with the help and support of other Buddhist countries.

When Nepal proposes this at the UN, 17 main Buddhist countries with large Buddhist population—Japan, Korea, Mongolia, Bhutan, Vietnam, Cambodia, Laos, Thailand, Burma, Srilanka, China, Taiwan, Singapore including India—will support it and come forward as co-proponents. Five hundred million Buddhists and one billion Hindus who consider Buddha as their ninth incarnation and together form the 20 percent of the world population will also support this proposal with great enthusiasm. Buddhism is the fastest growing religion in the western world today. Millions of intellectuals and thinkers who respect Buddha will also support this proposal.

Achieving the goal
To achieve this goal, we need to do the following:  We need to instruct all diplomatic and consular missions of Nepal around the world for diplomatic lobbying with different Buddhist and non-Buddhist countries for their support. We need to seek support from Buddhist scholars gathered from 30 different countries for this proposal at the upcoming World Buddhist conference being organized in the presence of Nepal’s Prime Minister in Lumbini from April 28-30. We need to start celebrating Buddha Purnima as National day of Meditation in Nepal and instruct all Nepali missions around the world to do the same.

Osho Tapoban and its 200 meditation centers around the world are ready to provide all the support that will be needed. Indian government has opened many National Yoga Institutes to promote yoga. Nepal should also open a national Meditation Institute for research and promotion of meditation in a suitable location. We need to make Yoga and Meditation a part of the academic syllabus in different academic institutes and government training centers.

India has made a great infrastructural development in Bodhgaya where Buddha attained enlightenment, Sarnath where Buddha gave his first sermon and Kushinagar where Buddha left his body by establishing air, railways and road connectivity. Nepal also needs to develop such infrastructures at and around important Buddhist and Hindu pilgrim sites.

Today three to five percent people in developed nations are practicing some kind of meditation. This shows that humans have started feeling the need and importance of meditation.

I request the government of Nepal to take this proposal as a priority and make this auspicious effort as soon as possible. Gathering the support from the world to declare Buddha Purnima as International Day of Meditation at the global platform of United Nations will be a more creative expression and a statement unto itself that Nepal is the country of the Buddha.

Through promotion of Yoga and Meditation, Nepal will not only benefit economically but it will also help Nepal attain an international recognition and respect. This single gesture will pay the tribute to the great contributions of Buddha for world peace and harmony which cannot be done even by speaking a thousand words.

KATHMANDU, Nov 26: In a bid to garner support and cooperation to file the constitution amendment proposal, the ruling CPN... Read More...

Chinese proposal to invest in Tamakoshi III and Tamor projects