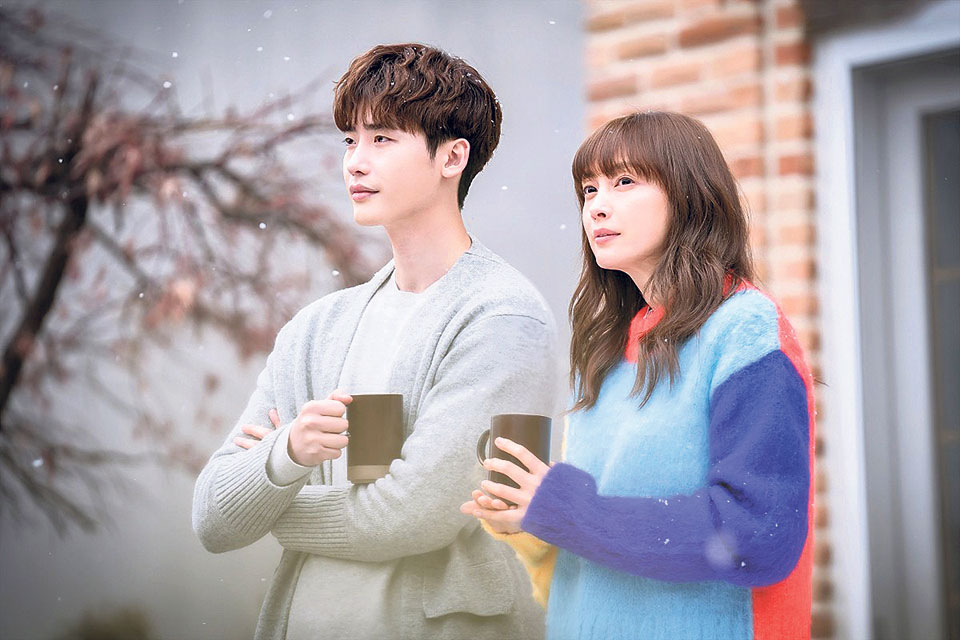 After watching quite a few K-dramas over the past few years, I’ve realized that it’s the less dramatic ones that are relatable and based on everyday lives of people that is my cup of tea. And that’s why I enjoyed watching Romance is a Bonus Book. It tells a heartwarming story of a struggling single mother, Kang Dan Yi, and how she finally manages to get a job after taking a few years off to look after her daughter in the competitive, harsh and fast paced office setting of South Korea.

The drama starts out with a very compelling first scene. We see Dan Yi getting ready to get married but instead of being excited to start this new journey, she’s a nervous wreck. She feels like she isn’t ready for married life and is having second thoughts about her decision to marry in the first place. Fueled by her conflicting thoughts, she runs away moments before she’s supposed to walk down the aisle and that’s when Cha Eun Ho finds her.

The two of them have known each other since their middle school years and although Dan Yi is a few years older than Eun Ho, they see and treat each other as close friends. (This is worth noting because age is a big factor that represents how much respect people get in South Korea. Young people have to be very respectful towards anyone who is older than them – they can’t behave casually or use casual language while interacting with their elders.) He somehow convinces her to go back and get married – even though he doesn’t like her husband-to-be very much and is against the idea of them getting married himself.

This whole scene feels a little odd at first watch. It plays into the clichéd ‘runaway bride’ trope and just when you think Eun Ho and Dan Yi are lovers and are eloping after evading her forced marriage, you realize that they share a platonic relationship and Eun Ho is actually encouraging her to get married to the man she’s left hanging at the altar.

Flash forward a few years and Dan Yi’s marriage and her whole life has taken a sour turn. She hasn’t seen her husband since he left their house a year ago and, as a single unemployed mother, she’s struggling to support her daughter who is studying abroad (in the Philippines).

What’s more, she’s homeless, broke and no one is willing to give her a job – despite her academic excellence and years of experience as a successful marketing expert – just because she took a few years off to take care of her daughter. She sees a vacancy for a ‘task support’ job at Gyeoroo, the publishing company where Eun Ho works as chief editor, meant for high school graduates and, after applying and lying about her academic qualifications, gets the job. By this time, she has also come clean about her situation to Eun Ho, who had no idea about her divorce, and she starts living with him. This is where the present timeline of the story starts.

Besides having an engaging and believable plot, the drama excels in portraying the romance between the two leads. Their affection for each other feels genuine and the build up of romantic tension is neither rushed nor drawn out. I also like the fact that both Dan Yi and Eun Ho care about, need and love each other equally – their relationship seems balanced and healthy which is exactly how a relationship should be. Even the relationship Dan Yi almost had with the second male lead, Ji Seo-joon, a successful artist who mostly creates creative book covers, seemed healthy and natural.

I think that most K-drama titles, when translated to English, make little sense and tell next to nothing about the plot of the story and that’s certainly the case with Romance is a Bonus Book. Although this drama includes a fair amount of romance and features a book publishing company extensively, its plot showcases more interesting and important issues that I feel should have been highlighted in the title.

The difficulties Dan Yi faces while looking for a job is especially played up in the drama. This combined with all of the other misfortune Dan Yi faces makes watching the first couple of episodes almost unbearable. But if you push through, the drama takes a lighter and livelier tone in the latter episodes. The drama is also unexpectedly funny at times and it’s mostly positive and intellectual humor – no one is being bashed and there is no silly slapstick comedy.

The supporting characters – including a lot of the other workers at Gyeoroo – are also portrayed properly. They have convincing story arcs and the drama has loads of scenes dedicated to developing these minor characters. One of the reasons why I enjoyed this drama so much was because of the detailed and charming representation of the workings of a publishing company. All the actors – the leads as well as the supporting cast – have portrayed the characters they are supposed to play incredibly well.

Overall, the drama is a gratifying watch. You will laugh, cry and scream along with the characters throughout the 16 episodes and although the storyline is simple, you won’t find a single dull moment while watching it. It also earns brownie points for being a noona romance (which is a story where the lead female character is older than her male partner).