A promise made during election delivered within 20 days 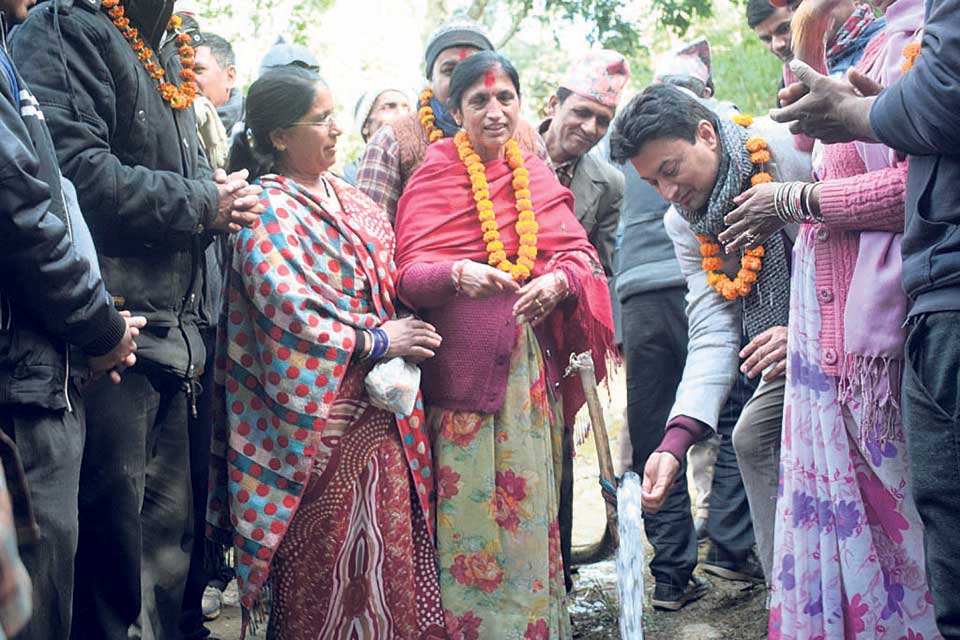 GULMI, Jan 4: A month ago, Gokarna Bista reached Resunga Municipality-6, Chekmi of Gulmi district as part of his election campaign. When asked about their problems, most locals lamented that they were suffering in lack of proper irrigation facility. Bista had promised that he would immediately go to Kathmandu after the elections and then solve their problem.

Within 20 days of his election to the parliament, Bista has fulfilled his promise by introducing solar power-based lift irrigation in the village. This has not just elated the locals but has also made them hopeful.

"A lot of our cultivable land had turned barren in lack of irrigation facility. But, we are happy that our new representative remained true to his promises and offered us respite," said Durga Marasini, a local. To express their gratitude, the locals have assured Bista to make their village full of vegetables by the time of his next visit.

As informed by Gan Bahadur Gurung, chairperson of the ward, water has been lifted from Khalachaur of Chekmi to a hill which is 700 meters above the village. According to Gopal KC, secretary of the Consumers Committee, as many as 150 households will be benefitted after the completion of this project. This technology, which operates without battery, has turned effective in several parts of the country, informed technician Suresh Raut.

With this, lawmaker Bista is planning to introduce this system in 40 to 50 more local units of the district. "I have told the villagers that I did my part. Now, it's your job to make this village full of crops and vegetables. I am actually dying to see that," said Bista.

Besides that, Bista has also prioritized drinking water, road and electricity. "Within five years, I will deliver all of my promises and this is just the beginning," Bista added.

Employment promise made during polls unfulfilled

BAITADI, April 15: During the local elections held last year, the candidates in Baitadi district had made various promises, including a... Read More...

URLABARI, Oct 8: The Biratnagar Customs Office, which used to remain closed for a week during the Dashain festival earlier,... Read More...