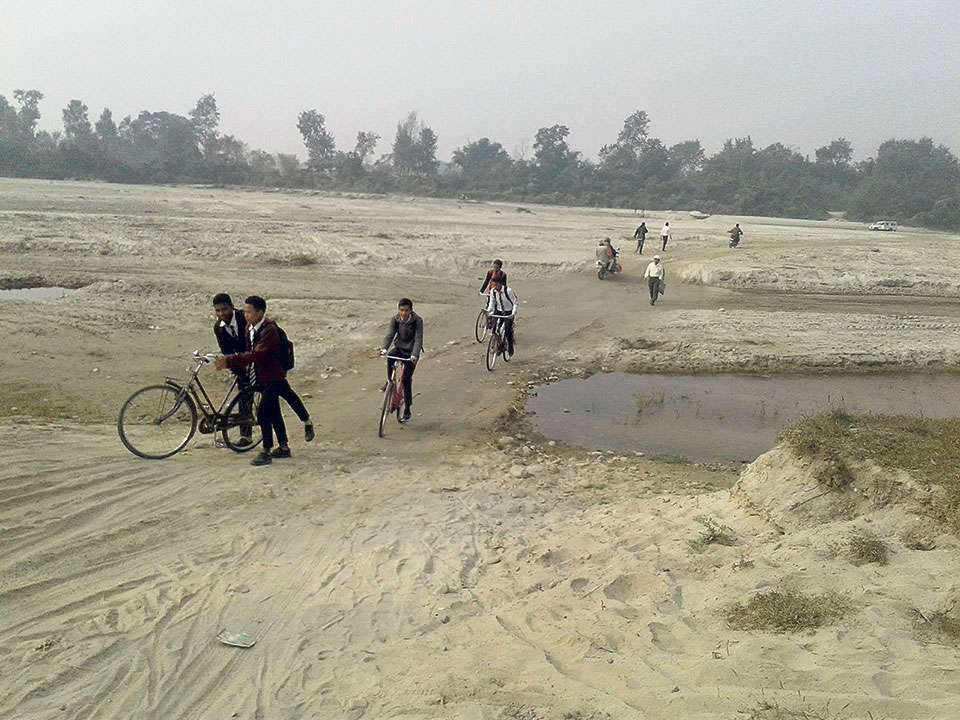 Students of Simle village in Jhapa on their way to school crossing a river basin in this recent photo.

JHAPA, Feb 3: Anil Jogi is an eighth grader. He goes to school only during winter. It's not because he dislikes school but because he cannot manage to attend classes except in the dry season.
“The way to school is difficult. We cannot get through the route any other time except winter. We cannot cross the rivers,” he said.

Jogi is one of the scores of students from Simle village of Jhapa who cannot imagine attending school except in winter. Children from around 250 households share the same fate. The village is surrounded by rivers at three sides, depriving the young ones from safe journey to school.
“The rivers swell during rainy days. They remain quite big even during other time. Only in winter does the water level lowers down a little and we can go to school,” Jogi said.

Jogi's village is in Jhapa but his school is in the adjoining district Morang. “We don't have any school nearby our settlement. We have to go far away to study,” he says. He added that the difficulty in reaching school has quite affected their education.

Sunil Wagle, an 11th grader, is no less disappointed. According to Wagle, the government has neglected the people of his village. It is not just the issue of education but the locals are deprived of health and other facilities, too, he said.

“In our village, there is no facility. We don't have health posts, medicines and doctors nearby.

During emergency, people get no help,” he lamented. “We are somewhat educated and we can think rationally. Others in our village even do not know anything about their rights,” Wagle added.
Wagle reminisces the days when he had to walk miles to reach school as a kid. He recalls falling ill several times due to the fear of rivers and the long distance. “Primary education is available in the same district but higher level students have to go as far as Aitabare of Chulachuli, Ilam to attend classes,” he said. “We have to cross three rivers to reach Aitabare,” he said.

As a small kid, he always felt quite nervous while crossing river to go to school. Sometimes, children risk their life while getting through the rivers, he remarked.

Though Jhapa is considered rather a developed district, students like Jogi and Wagle rate it as the worst place in terms of facilities. They say that there is a need to overhaul the plans and policies as well as government system so that education can be easily accessible to everyone.

Hurdle is Ratuwa River
According to locals of Simle village, Ratuwa River is the biggest hurdle for their 'voyage' to school. In lack of bridge, they cannot get beyond their village as and when they want, they lament. Jogi said that many children in his village stop going to school after completing the primary level. “They don't dare continuing their studies. Neither do the parents force them continue studies,” he said.
According to Hari Prasad Chamlagain, principal of Shaid Ratna Primary School, Simle, children from some particular settlements are indeed in great difficulty. They are poor and marginalized as well, he said.

“This school is for all. But we have not been able to ensure education to all,” he said.

“There are other rivers as well, but Ratuwa River is the biggest one. We have been isolated due to this. We would have better life if there had been a bridge or some other solution,” he added.
Chamlagain also noted that students in his school find it difficult to compete elsewhere. Due to the medium of Nepali language used in the school, they cannot compete when they join some other school at higher grade. “We do not have resources to change our medium of instruction,” he said.
Meanwhile, an adolescent Samil Limbu from Damak stated that 'everything is a matter of economic status'. Not all the people from Simle are so poor, he said. “Those who are rich manage to send their children to boarding schools. It is only the poor people whose education is affected,” he said.

Where the Billionaire Population is growing Fastest

Want to party till dawn? Lakeside is the place!

Lakeside Pokhara goes to sleep late and wakes up even later. Late night parties are what make the place exciting.... Read More...

Salaries and allowances of Speaker, Deputy Speaker withheld until court’s decision
10 hours ago