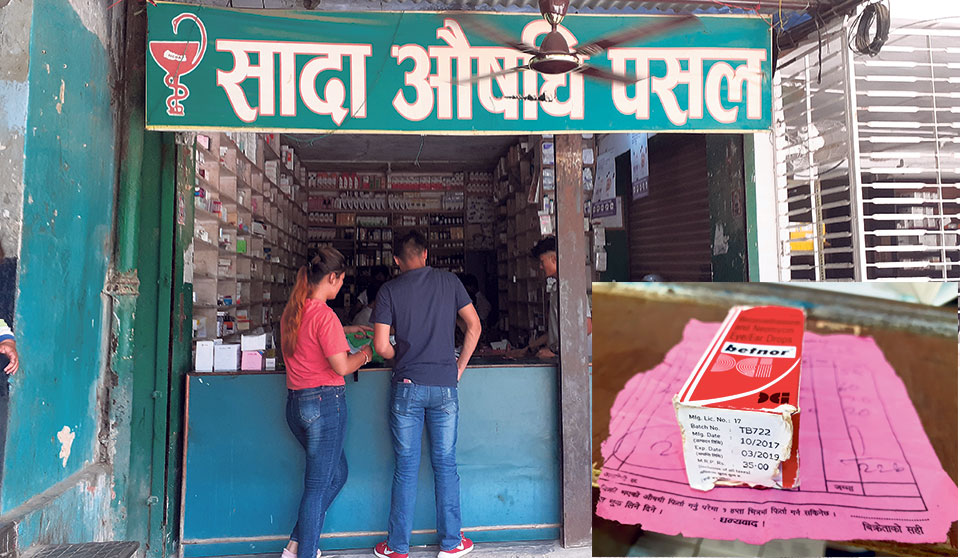 NEPALGUNJ, July 6: A pharmacy in Nepalgunj has been found selling expired medicines to patients.
'Sada Ausadhi Pasal' of Banke which has been operating on the premises of Bheri Hospital had sold an expired medicine to Dolma Khatri, 23, of Khajura Rural Municipality-6. The victim has complained that the medicine affected her health negatively.

After finding a minor wound inside her ear, Dolma reached Bheri Hospital for treatment on Wednesday. Later, she went to the pharmacy in question to purchase the prescribed medicine named 'Betnor'. "After buying the medicine, I returned home and used it once before sleep and again after waking up the next morning," said Dolma, adding, "However, I found out that my wound became worse after using the medicine."

On Friday, she again went to the pharmacy to complain about the medicine. One of the workers has accepted that Doma was mistakenly sold the expired medicine. "It did not happen intentionally. As the shop was crowded, we could to see the date," said the worker. It has been learnt that the medicine was brought from the Nepalgunj-based United Drug Center.

Meanwhile, the owner of the pharmacy, Santosh Gharti, claimed that they did not give the medicine with the ill-intention of harming the patient.

"Though unknowingly, we made a mistake but that won't be repeated in the future," said Gharti in a telephone call.

DANG, July 30: Small and marginal farmers in Banke have suffered due to crop loss caused by recent floods in... Read More...