A Madhesi woman sets example for many 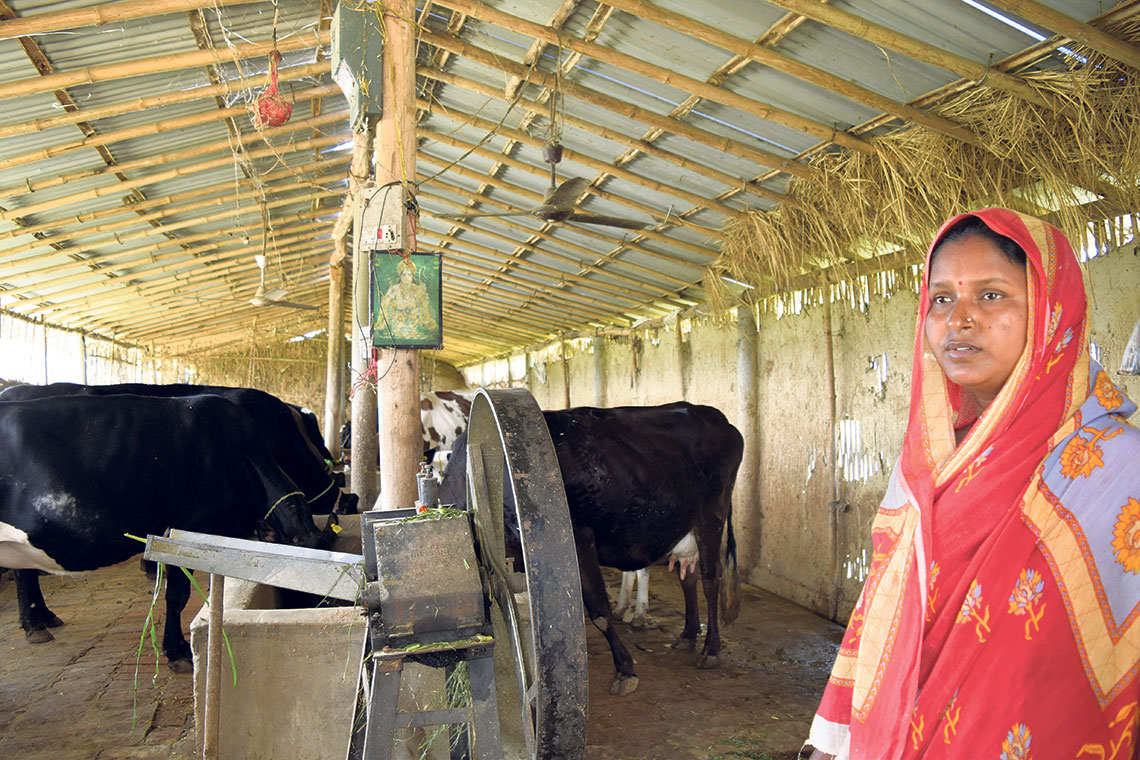 Ramjhari Yadav at her cow farm

SIRAHA, May 18: Only a Madhesi woman knows how challenging it is for women of her community to step out of their houses and explore the outer world. Earlier, engaging themselves in income-generating works by putting aside their stoves and shovels was something of a dream for a lot of women and it still is for many. But Ramjhari Yadav of Aurahi Rural Municipality-4, Khajanpur, has dared to make this dream come true. Today, she is attracting women into business through her Integrated Women Agriculture Farm.

Ramjhari started this business because of her enthusiasm to do something different. Breaking the traditional stereotypes, Ramjhari has been making enough money from fish farming, and cow and duck farms. Not just that, she is also growing fodder and vegetables as well. Ramjhari, is an example for hundreds of women who have been trying to muster enough fortitude and strength to get out of their houses and trying to achieve something big.

Until four years ago, Ramjhari had to struggle for making her family's ends meet but now she makes Rs.3000-4000 per day. Three years ago, she kept her land as collateral to seek Rs 1 million loan from the Agriculture Development Bank and established her farm. Now, this business has uplifted her living standard as well as earned her recognition in the area. She has taken 46 katthas of land on lease for her business. Though in the beginning she just had two cows and three ponds, she now has 9 ponds and 17 cows. And she has more than 200 ducks in her farm.

Despite all barriers, Madhesi women of late have realized that they too can earn for their living without depending on men. Increasing literacy rate and various kinds of awareness as well as skill generating programs for women have boosted up their confidence and made them realize their capabilities.

"I should not work just for earning money but for earning respect too," she said.She is also providing training to women in sewing and cutting. She keeps motivating other women to engage themselves in business. With the objective of making rural women independent, she is planning to establish a co-operative soon. She has been a lesson for many who think they won't be able to accomplish much as they are uneducated.Local intellect Birendra Sharma states that society has a lot to learn from Ramjhari. "There was a time when people used to backbite her back but now they look at her with respect in their eyes," he said.

Low participation, lack of training, no co-operation from society, low privileges from the government and unavailability of sufficient funds are some of the problems for women willing to engage themselves in business. "Seeking loan from banks is easier for the owners of large scale industries but for us it's a hassle," said Ramjhari.

According to Ramjhari, she wants to extend her business further so that she can provide employment to other women. But unfortunately she has not been able to do so as the bank is not ready to offer her enough loan.

As most of the males of rural parts fly to foreign land seeking jobs, women are playing a pivotal role in increasing the Gross Domestic Product (GDP) and income of their villages.

Earlier, Ramjhari earned her living by running a shop in a hut. But today she earns more than Rs 100,000 per month. "There is so much demand for these products in the market and it's not impossible for me to extend this business if I can increase the production," she said. Her husband Ram Prabal Yadav has been very supportive to her since the very beginning. When she is busy in training, he looks after the farm. She says her husband's support has been vital. "I am a huge fan of hard work, dedication and devotion," said Ram Prabal.

Caption: Ramjhari Yadav looking after the cows in her farm.

KOHALPUR, March 3: As per the roles assigned by the traditional society, men should be engaged in labor, business and wages... Read More...