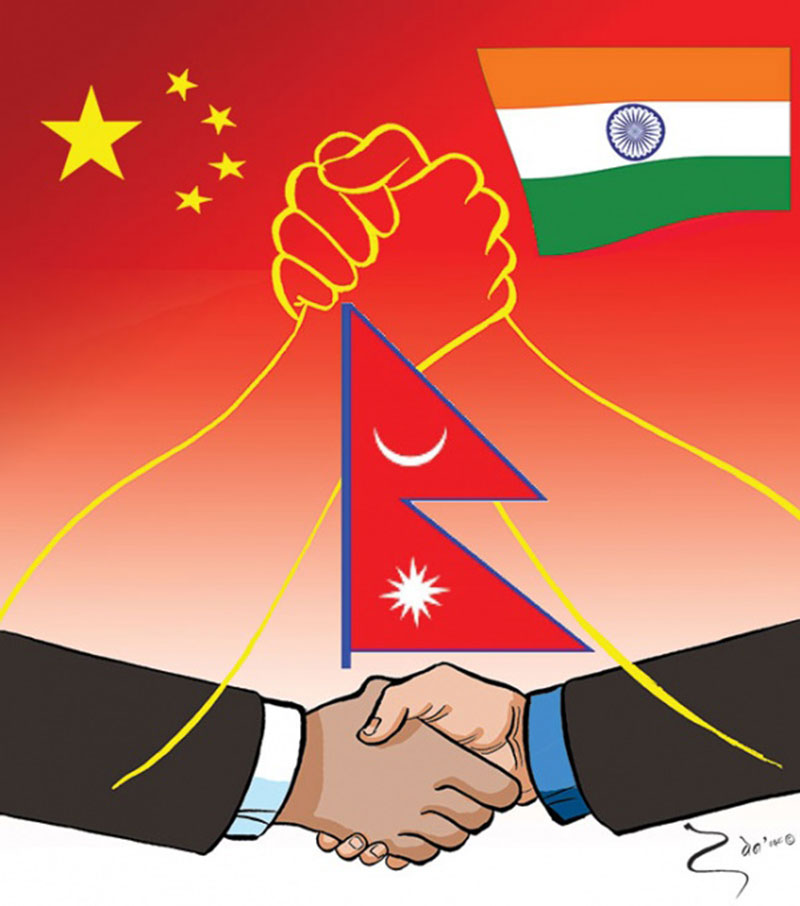 As our neighbors’ ability for power projection beyond their borders increases, the new strategic dynamic puts Nepal in sharp focus of both established and emerging powers
Geography and politics are important factors in the conduct of foreign policy. As Napoleon said, “To know a nation’s geography is to know its foreign policy”. Geographical factors heavily influence social and economic development of any country.  Geopolitics, likewise, determines the priorities of any state in its immediate neighborhood and beyond. Despite the transformative trends of geo-economics unleashed by globalization, and technological innovation and its capacity to overcome the Himalayan barriers, geographic location has not become irrelevant in inter-state relations.

The Economist (January 3, 1998) describes geopolitics as “the maneuverings and counter maneuverings of the world’s big powers, the question of who does what to whom around the globe, and why. It is a subject you might think, that you ignore at your peril.” The strategic game is carried out by countries whose will and economic and strategic clout extend beyond their borders. They influence geopolitics in order to advance their interests.

The economic transformation of China and India has accelerated in recent years. Strategic power has followed economic power. According to the IMF, three of four largest economies in the world—China, Japan and India—are now in Asia. A 2012 report in The Guardian predicted that “by 2030 Asia will have surpassed North America and Europe combined in terms of global power, based on GDP, population size, military spending and technological investment”. There are projections that by 2025, two-thirds of global population will live in Asia; EU will have 7 percent and the US 5 percent of world population. Political analyst Gideon Rachman argues that “Easternization of economic and political power suggests that the years of uncontested Western primacy are coming to a close”.

As our neighbors’ ability for power projections beyond their borders increases, the emerging strategic dynamic puts Nepal into a zone of sharp attention of both the established and emerging powers. With attention on Asia growing, geopolitical realities and regional strategic dynamics spill over on Nepal’s politics, foreign policy, economics and even socio-cultural spheres.

Because of the perennial political fluidity, strategic fragility, economic stagnation, and uncertainty over a series of steps to be completed by January 22, 2018 for the implementation of the hard-worked constitution, outsiders’ leverage has grown enormously in Nepal. The systemic weakening of state institutions is fast turning the country into a platform for India, China and the Western powers to test their supremacy and checkmate each other. This is producing several geopolitical pressure points. It is no secret that mismanagement and miscalculation of these pressure points by political leadership for power and personal gains have increased Nepal’s geopolitical burdens.

Never before in history had neighboring countries been dragged so explicitly in the internal power game in Nepal than during the recent exit of Prime Minister KP Sharma Oli, even though the proximate cause of his departure was a no-confidence brought by his own coalition partner, the Communist Party of Nepal (Maoist Center) and supported by Nepali Congress, the largest party in the parliament. Oli attributed the change in political course in Nepal to foreign influence. While such a posture grossly undermines sovereign democratic process, it also unnecessarily drags neighbors in our domestic politics. Unprovoked by such utterances, however, both India and China described the change of government as Nepal’s internal matter.

Having failed on the domestic front, Oli chose foreign policy to deflect attention by stirring up troubles with neighbors and other countries. His government engaged in rhetoric of ultra-nationalism, and lost sight of the root problems of the country. He chose to play up geopolitics: while important treaties and agreements were credited to him and his party, his exit was portrayed as an attempt to undo these treaties. It was conveniently forgotten that such treaties/agreements do not emerge overnight.

Thorough groundwork is needed over months and years for them to concretize. The transit agreement with China, for example, was in the making for several years. It was not signed earlier as there were no bilateral visits, from either side, in the past few years. Irrespective of parties in power, treaties and agreements with foreign countries done are on behalf of the state and they become the responsibility of the state. On their implementation rests the credibility of the state.

The real test of Nepal’s foreign policy is to strike a right balance in its relations with India and China. Whatever the fate of Non-Aligned Movement at the global level, Nepal’s strict adherence to its principles remains immensely relevant, as it allows it to judge every issue on its merit in order to ensure its dignity and survival as a sovereign nation. Geographical realities dictate that Nepal earns the trust and confidence of its neighbors and friends and maintains dignified, cooperative and beneficial relations with them.

The recent travels to neighboring capitals of two Deputy Prime Ministers as PM’s special envoys have demonstrated the priorities attached to Nepal’s relations with neighbors. It showed the commitment of the new government to work in mutual trust and build understanding in bilateral relations.  It is expected that the PM’s messages to his counterparts reaffirm Nepal’s commitment to work in mutual benefit. The envoys have brought the messages of high level visits from both the countries. While high-level visits will surely create momentum for cordiality and cooperation, creating mutual trust is the perquisite for better relations.

A foreign policy premised on the nation’s unity and interests, on the trust and confidence of it neighbors will yield beneficial results in the course of the country’s engagement with the world. Given the unique geo-political and geo-strategic location of Nepal, its volatile present, a violent past, and unfolding global strategic scenarios make Nepal’s geopolitics crucial for regional and global peace and security. Nepal needs to put its house in order and demonstrate its skills in managing geopolitics for the larger interest of the country. Balanced relationship with its neighbors and national unity are the only way to protect Nepal’s interests and honor. It is also the only way to prevent the country from becoming a playing ground of foreign powers.

KATHMANDU, Nov 15:  Tribhuvan University (TU) is not happy over the bringing of the Rajarshi Janak University (RJU) Act that has... Read More...

KATHMANDU, Feb 11: While criticizing the government for its failure to grant real powers to the Truth and Reconciliation Commission (TRC)... Read More...

KATHMANDU, June 4: The restructuring of the education sector in Nepal could be now executed with the Legislature-Parliament unanimously passing... Read More...

Talk at the top level
11 hours ago