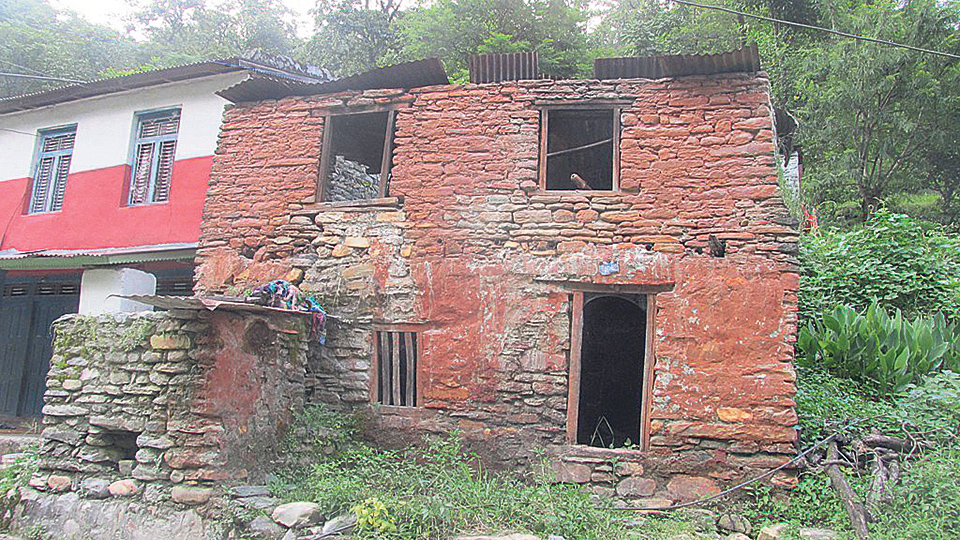 MYAGDI, September 11: Shiva Karki of Beni Municipality - 5 lost his house to devastating earthquake of 2015. Like many others, who were displaced by the earthquake, Karki also started living in a temporary shelter nearby his land along with his wife and little children. However, while the government recorded the names of the displaced to offer house grant on the same basis, Karki's name was never registered.

His old house was two storeys made of stone and mud. According to Karki, who is mute and dumb, some people had come to take details of his damaged house. His neighbor Bir Bahadur Baniya, who can interpret Karki's sign language, stated that the government team might have noticed him but neglected him. The local of Baguwakhola added that his name has actually not been included in the list of earthquake victims. Baniya further informed that Karki has been living in the damaged house and that his family is risking their lives by doing so.

“He was living with us in a temporary shelter. But when people started shifting to new or old house, he also started living in his own house. But it is fully damaged and is very risky to live in there,” Baniya said. “He cannot speak and also has problems in hearing,” he added.

According to Baniya, Karki's family is too poor to think of repairing or building new house and asserted that the family should have received the government before everyone else.

“Others have received house grant even when their house is slightly damaged whereas his house is badly damaged. But due to their inability to put their demands or issues to the government team, Karki family has been deprived of grant,” said Baniya. “We had checked the list of victims and his name was missing there,” he added.

Baniya stated that those who did not receive grant on time had reached district headquarters to know the details. While others found their names in the victims list, Karki's name was not found in the list.

After over one year of earthquake the government had started distributing house grant. In the first phase, victims received Rs 50,000 while the total of Rs 300,000 was promised. In the second phase, which is yet to be received by many, victims were provided with Rs 100,000.

Karki has not received a penny. According to locals, independent organizations had also distributed relief, and Karki was deprived of that too. As per the record of the National Reconstruction Authority, there are 868 quake victims in the district.