A CEO from within: Nepali banks showing signs of succession plan 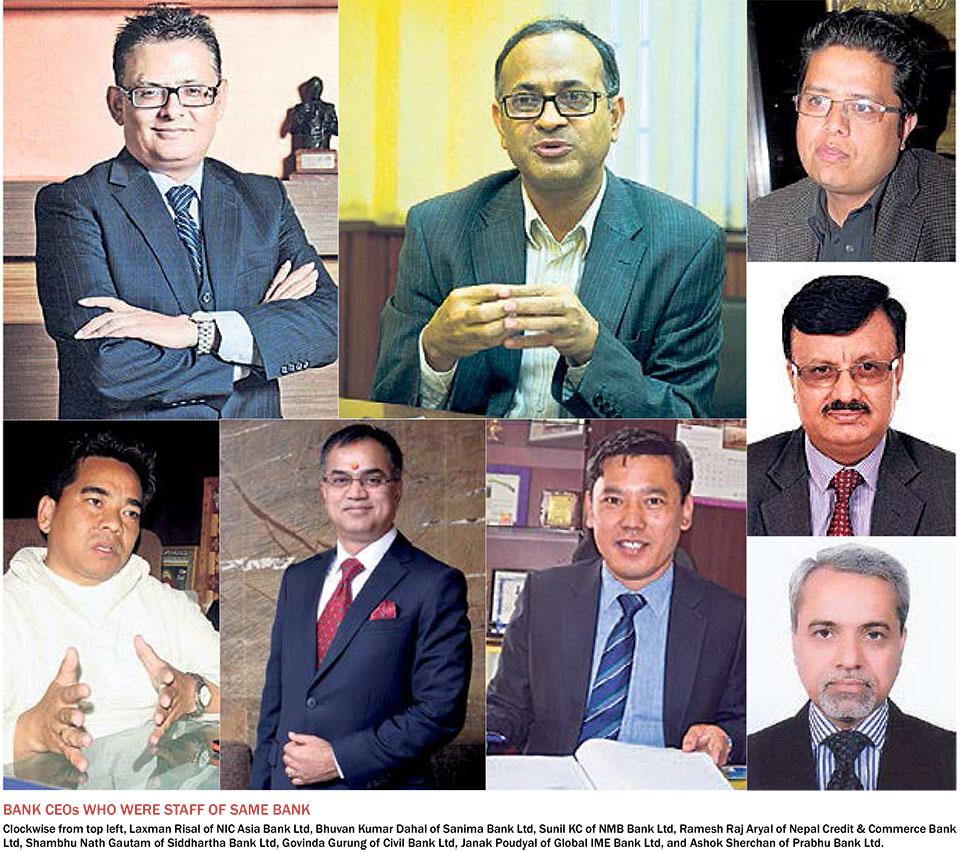 KATHMANDU, Nov 30: Over half a dozen commercial banks are now led by chief executive officers who have been promoted from within their respective institutions.

Global IME Bank Ltd on Wednesday appointed Janak Sharma Poudyal as its CEO, becoming the latest commercial bank in one year to elevate its deputy chief executive to the highest rank of the management. Poudyal briefly served as the acting chief executive after the former CEO Anil Gyawali quit the bank for undisclosed reasons.

Banks are now showing preference to promoting executive officers internally as against picking officers from other banks or hiring those who have recently quit their jobs at other banks.
Until recently, there was a high mobility among bankers who used to switch banks.

However, banks are now focusing on tapping into their own human capital. NMB Bank Ltd’s deputy CEO Sunil KC succeeded Upendra Poudyal as the CEO, while NIC Asia Bank Ltd found Laxman Risal a fitting candidate to be promoted to the topmost position.

Siddhartha Bank Ltd recently promoted Shambhu Nath Gautam to the post of CEO.
Likewise, Civil Bank Ltd decided to choose its second man Govinda Gurung as the CEO, after testing him briefly in the post as acting CEO, when Kishore Maharjan quit the post. Nepal Credit and Commerce Bank Ltd is another commercial bank that elevated the deputy to the chief executive officer rather than looking for somebody outside the bank. Prabhu Bank Ltd’s CEO Ashok Sherchan is one who not only oversaw the merger process with problematic Grand Bank Ltd in the capacity of deputy chief, but steering the bigger bank after merging.

Three years ago, Bhuvan Dahal, the current CEO of Sanima Bank Ltd, rose to the post of CEO after being the deputy CEO for nearly a half year.

Experts say that the rise of the second-layer leaders in the bank to the top position indicates that there has been some progress within the banking industry of devising and implementing ‘succession plan’.

“Our banking industry is currently in a transformational stage. Seasoned bankers are quitting banks while new breed of leaders are emerging to replace them,” Sanjiv Subba, CEO of National Banking Institute, national-level banking and finance academy, told Republica.

“This is a positive development because those rising to the top have good institutional memory. This is also a testing time for the new breed of CEOs,” said Subba, urging the new leaders to give a priority to corporate governance, robust risk management, people development and capital investment.

Promoting an executive from within is evidence that the institution is strong and has a succession plan. It also sends a message for the rank and file that they also have a chance to climb up the management ladder.

“If there is someone within the institution who can immediately take over if the chief quits, we can say that the institution is in a strong position,” said Upendra Poudyal, former president of Nepal Bankers Association (NBA).

“A junior staff or a teller of the bank will also have a hope that he or she will also be the CEO someday thereby offering an incentive to work hard,” added Poudyal who was the CEO of NMB Bank and was later succeeded by his deputy.

KATHMANDU, May 10: Indian Prime Minister Narendra Modi, who is visiting Nepal on Friday, has announced to extend support to... Read More...

From Baglung to Prabhu Bank’s CEO, story of inspiration and hope !

Ashok Sherchan has been the CEO at Prabhu Bank Ltd. since 2014. Originally from Baglung, he graduated from Shankar Dev... Read More...

Madhav Nepal is not on right path: Bagmati CM Shakya
15 minutes ago
Current govt is an alliance of greedy sinners: Rayamajhi
42 minutes ago