A beautiful mind (with video)


Darshan KC, who suffers from cerebral palsy, working at his computer at his home in Baneshwar, on Thursday. Photo: Anjali Subedi/Republica

and carry some wind

on my wing's lap

I can't attract the world

by blowing my beautiful voice

But I won't flush any tears which can sink the lawn

He often reads Shakespeare, consults dictionaries and types English verses with his nose. The stanza above is from his two-year old poem that is dear to his heart. Typing with the nose is difficult and time-consuming, but this is the only way for him to break free from his fragile and stiff body and connect to the rest of the world. Darshan KC 'Saanku', 21, was diagnosed with cerebral palsy -- a permanent movement disorder that appears in early childhood due to brain injury or brain malformation -- when he was just one. This robbed him of a normal and happy childhood; he lost his mother at seven. 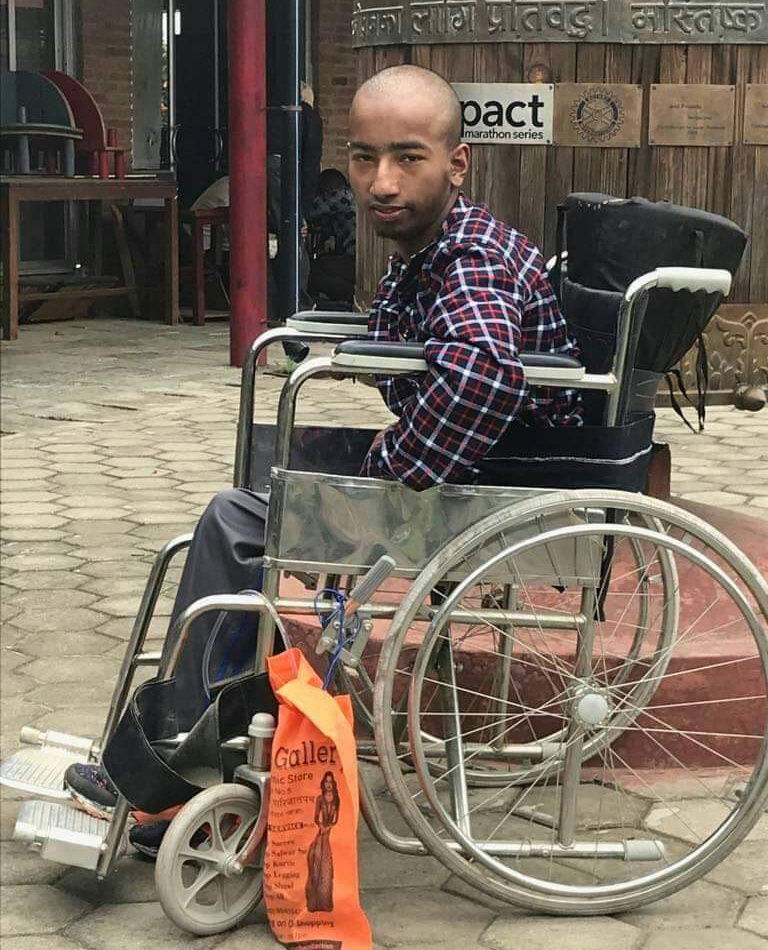 A patient with depression and a high blood pressure, the mother committed suicide, leaving Darshan even more helpless. Since then, father Nir Bahadur KC is everything for him.

A small cottage next to Babylon School in Baneshwar, Kathmandu is Darshan's 'home'. He spends days and nights in his room, mostly by himself. Darshan even avoids the warm winter sun, mainly to keep from patronizing passersby and neighbors. Thanks to the internet and social media, he has some good friends and well-wishers to make him feel warm.

"When he was younger, he would smile at whatever people would say. But as he grew up, he started detesting visitors mostly because of their condescending treatment. That's why he avoids going out," said his father Nir Bahadur. "He loves to read and write in his room, and has made some friends on Facebook, he chats with them," he reported.

Jyotshana Adhikari, his long time Facebook friend, finds Darshan warm and cheerful. He never forgets to wish on her birthdays. And Darshan reciprocates to even a little gesture of kindness. “Despite all the difficulties, he seems to have a very positive outlook about life. He gives love to everyone,” she said.

Nir Bahadur is a house painter and the sole breadwinner of his six-member family. Four years after the death of Darshan's mother -- his first wife -- he remarried and the couple has three children. As a father, he seems to be doing everything possible to keep Darshan happy and creative.

Cracking jokes and laughing over little matters seem to give a great deal of joy to Darshan, who can only laugh and not express too many words. The son-father bond was one of the most beautiful moments when Republica visited the family Thursday evening.

"Darshan needs my help for almost everything in day-to-day life. But he is brilliant, and he has a dream to publish a book on poetry and I hope that will come true," said Nir Bahadur. "He writes in English, and uses difficult words, I understand very little," he laughed. 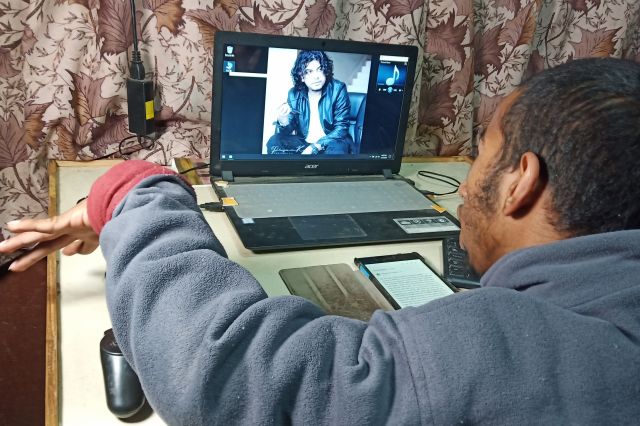 According to Simran KC, Darshan's half-sister, he is the smartest person in the family. When she was a child, she would think why Darshan did not play with her. Later she realized that he was helpless. “He loves me, he is very nice. He writes with his nose, as he cannot move his fingers properly,” she said.

Nir Bahadur and Shila Thapa, Darshan's mother, were worried when he did not walk like other babies when he was about one. Following consultations with doctors at Bir Hospital, Darshan was admitted to a school in Dhapakhel run by SGCP (Self-help Group for Cerebral Palsy, Nepal). The organization provides therapy and education, and has pick-up and drop-off services for kids like Darshan. He could study till sixth grade. According to Rajuna Singh, who is recently back from Australia after specializing in 'Special Education', Darshan is a passionate boy and his father is his strength. Rajuna taught Darshan to use the computer in school and the school itself set up all the digital arrangements (computer and wireless internet among other things) at his home as Darshan stopped going to school some five years ago.

"I have handled students with different physical and mental issues. Darshan is extraordinary," said Rajuna, who has also been wheelchair-bound since childhood. "If he gets support, which he deserves, he can do great things in life. But people with disabilities are quite neglected and deprived of opportunities in Nepal," she added.

There is no exact data available on how many people in the country suffer from the condition like that of Darshan. While the 2011 census states that less than two percent people in Nepal are disabled, officials at the National Federation of the Disabled-Nepal (NFDN) have reservations about the figures. "People with disabilities are categorized in terms of severity, but we are yet to have distinct data on different types of problems. The census of 2011 is unrealistic; it says, 1.9 percent people in the country are living with disabilities," said Raju Basnet, general secretary of NFDN, adding that life is much more difficult for the disabled in Nepal compared to those in other countries. "Family support and self-motivation are vital for even basic survival of the people with disabilities," he states. 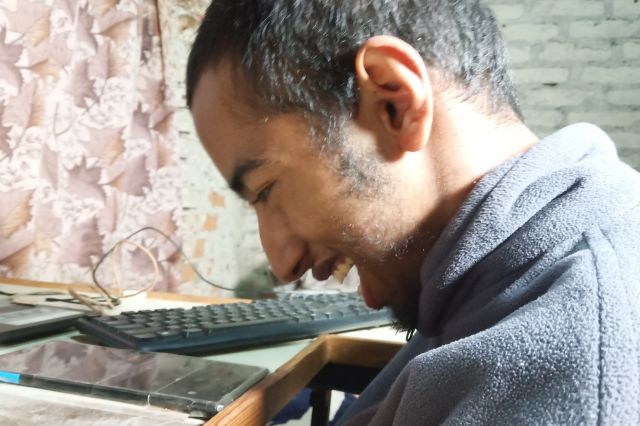 Darshan uses tough English words not just in his poetry but also during informal conversations. "His pattern is different as he could not get formal education. So his English language skills are self-taught. I told him to write simple sentences but he is quite fond of poetic terms and mystical words," she said.

When asked to define life in a word, Darshan said: "Struggle". He does not believe in God or any supernatural power, 'but does not deny the existence of the soul'. Mother's death in early childhood forced him to think beyond the physical world and wonder about different dimensions of existence.

"Life has lots of grief than joy. Even for a small achievement in life, you have to struggle a lot and have patience," Darshan elaborated. "I do not believe in religion or God. The world is not operated by God. I think it is on its course naturally," he added.

Every morning, after a cup of strong coffee, the first thing he does is read some Shakespeare. That gives him a lot of joy. "But it takes around 45 minutes to read even a few lines, as I have to understand the words clearly and contemplate. I verify my knowledge of even simple words, so my association with the dictionary is rather long," he clarified. "My grammar is poor, so sometimes I am disappointed."

It has been five years since Darshan started giving serious thought to becoming a poet. He initially read the Harry Potter series and other novels. But he finds his creative motivation from Jiwan Kanda Ki Phool by Jhamak Ghimire -- who also suffers from cerebral palsy and writes with her left foot.

"Darshan still wanted to continue school, but as he grew up, putting him on the wheelchair and collecting him on time in the afternoon every day became a hassle. In my absence, things get difficult,” said his father. “His self study began after he stopped going to school. He wants to publish a book and visit a few places inside Nepal," said his father.

Darshan has already composed around 150 poems on different themes. Seven of them are his favorites. “Others are not so good,” he admits. But he would like to come up with a collection of poems. He has spent several sleepless nights, thinking and writing. "It takes four to eight hours to complete a poem, my typing speed is slow," he said. If he did not have a long nose, which is his only tool to express himself, what would he have done? “I don't know,” he says, all smiles.

He is not aware that there are two other persons with cerebral palsy in the world who have also tried to fulfil their literary ambitions by writing with nose, as per Google search. Both from England, Richard Hopley's 'River Book' was published in 2005 and Josh Barry wrote an autobiography 'Adapted' in 2018, 'to inspire many more like him'.

Darshan's nose typing was a result of his strong will to become a poet, largely inspired by Shakespeare's verses, which touch him deeply, but he doesn't know why. “I hope my dream will come true some day. I want to impress the world!”

Darshan with dad Nir Bahadur KC at their home a few weeks ago. Photo: Republica

High blood pressure: Six foods to avoid in your diet if you want to lower your reading

HIGH blood pressure, if left untreated, can increase your risk of serious problems such as heart attack and strokes, so... Read More...

Nepal should stay neutral; have good relations with both India and China for its security, stability: Prof. Mearsheimer
2 hours ago