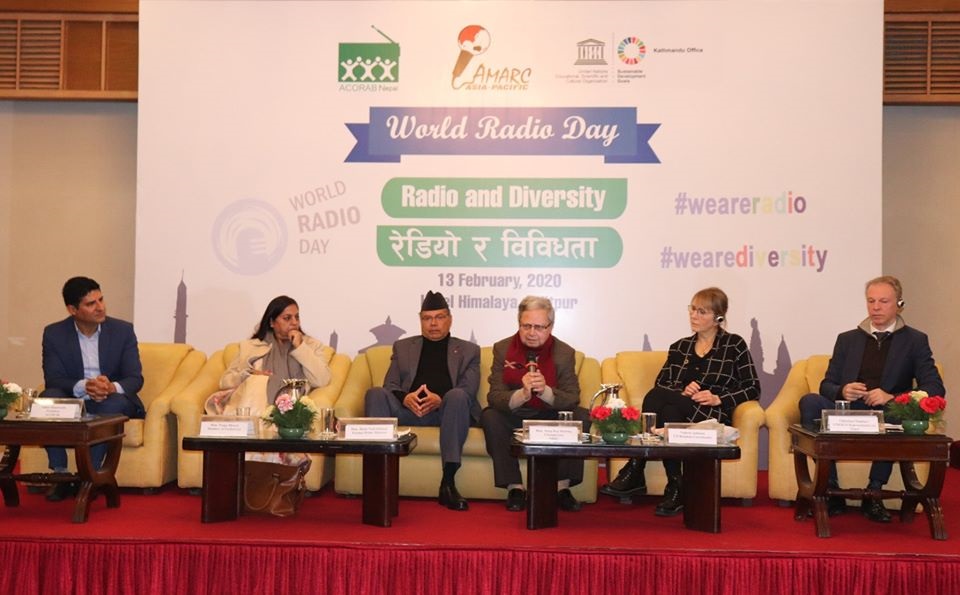 KATHMANDU, Feb 13: The 9th World Radio Day has been observed in Nepal on Thursday.

To mark the day, the Association of Community Radio Broadcasters Nepal (ACORAB) organized an interaction in Kathmandu today morning.

Addressing the program, former Prime Minister Jhalanath Khanal said that the community radios in Nepal are playing crucial role in ensuring correct and timely information to people across the country.

"At the same time, the community radios have been greatly contributing to make people aware of their right to information, right to equality and right to freedom," he said.

Khanal, who is also a senior leader of the ruling Nepal Communist Party, said that community radios should play positive role in nurturing the feeling of patriotism and national interests among the people.

On the occasion, Nepali Congress whip Pushpa Bhusal and chairperson of the National Human Rights Commission Anup Raj Sharma also said that the community radios play crucial role in making people aware of their fundamental rights including freedom of expression as enshrined in the constitution.

The day is being observed under the theme “Radio and Diversity”. Radio has remained the most widely consumed information medium in Nepal, with the unique ability to reach out to the widest audience.

Radio has the ability to shape a society’s diversity and stand as an arena for all voices to speak out, be represented and heard, the UNESCO stated.

Kathmandu-based Radio Sagarmatha was established as the first community radio in South Asia in 1996 and the numbers have sharply increased over the years.

More than 600 private, public and community radios are dedicated to serving their communities through the dissemination of information, education and entertainment.

KATHMANDU, Sept 4: The Nepal government should revise several pieces of draft legislation that threaten to undermine the right to freedom... Read More...