How appropriate is demand for death penalty to rapists? 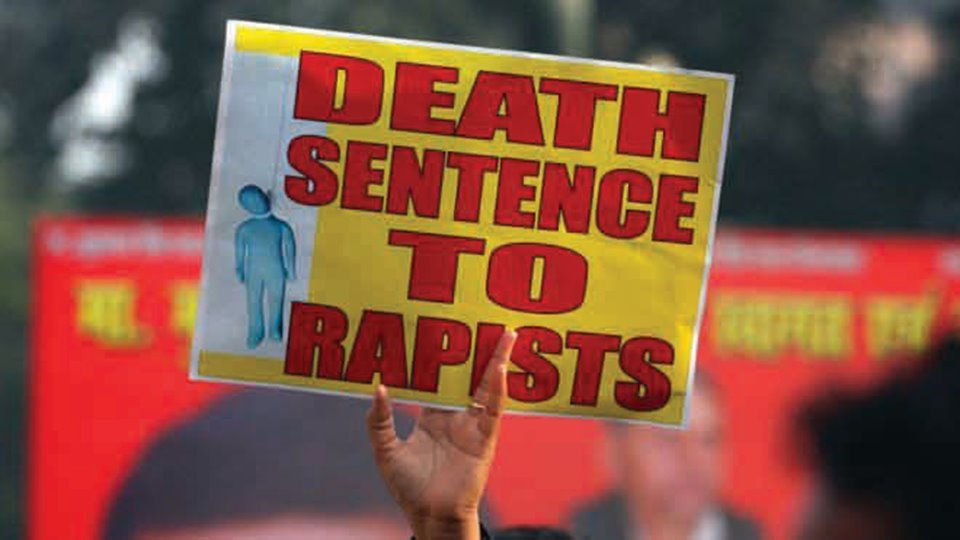 Former chief justices say demanding capital punishment that the constitution already prohibits is misguiding. The priority should be to effectively enforce laws against rape that country already has.

KATHMANDU, Oct 7: The recent spike on rape cases has prompted a demand for capital punishment-- something Nepal’s constitution prohibits-- against the rapist. This demand has led to a fresh debate whether to emphasize on implementing the laws that are already in place or demand the capital punishment that the constitution bars.

For former chief justices, the laws against rape are not weak but their enforcement has remained a challenge. They say that the demand for capital punishment is misguided and the debate should instead focus on making them how to enforce the anti-rape laws effectively.

Nepal is also a signatory party of a covenant that prohibits capital punishment. So, the laws for capital punishment is not immediately possible to introduce. Even if the country wants to draft such legislation, the constitution should be amended first.

Anup Raj Sharma, the chairperson of the National Human Rights Commission, says that he stands against capital punishment. He says that the implementation of laws in Nepal has been weak.  “Having strict laws alone is not sufficient. Their implementation is weak. The legal process is not quick and swift. Many rape cases end up in mediation,” said Sharma, who is also a former chief justice.

“The alternative to capital punishment is life imprisonment. We should not grant amnesty to anyone on rape case at any cost-- something also stated in our law,” he said.

Former Chief Justice Karki argued the laws that are already in place should be enforced effectively to punish those convicted as rapists. “There is a provision of life imprisonment in the law. That should be enforced,” said Karki. “However, the main duty of the government is to maintain law and order. The efforts should be to reduce the rate of crimes. A girl is kidnapped from the street and forcefully put into a vehicle in broad daylight. She is then raped in the vehicle. The case is not tried. There is no data about the rape in villages or toles,” she said.

As it is the responsibility of the government to curb crimes, it should deploy police personnel in plain clothes. She also said that the government should create an environment where such crimes cannot take place.

Stating that the state has itself proven to be the perpetrator in various cases including the Namita-Sunita case, Nirmala Pant case, and Samjhana BK case, he called for a setting up a separate bench in the court and slap death penalty to those convicted for this crime.

Even as capital punishment is unconstitutional, the student wing of the ruling Nepal Communist Party also issued a statement demanding the death penalty to rapists.

Bishnu Rijal, Deputy Chief of the Department of Foreign Affairs & Member of Central Committee- Nepal Communist Party, has also demanded the death penalty.  “Rape within family and gang rape. Enough is enough. Let’s revive the death penalty. Human rights will be protected, not violated if the death penalty is slapped against rapists,” wrote Rijal in his recent tweet.

A section of lawmakers has also raised their voices in parliamentary committee meetings in favor of the death penalty.

The laws in Nepal are not lenient to rapists. There is already a provision to slap life-long imprisonment to rapists. However, their enforcement has been poor as highlighted by the recent case of rape and murder of Nirmala Pant in far-western Nepal.

NEW DELHI, March 20: India hanged four men on Friday who were convicted for the rape and murder of a... Read More...

Egypt sentences officer-turned-militant and 36 others to death

KATHMANDU, Sept 1: Deputy Speaker Shivamaya Tumbahangfe clarified that it was not possible to frame laws in a way to grant... Read More...

There is no garbage in Dharan: Mayor Sampang
15 hours ago

Deepak Raj Giri's satire on Balen-Sampang war of words: ‘If you break your sticks, what will you get support from?’
13 hours ago
Nepal requests Indians investors to invest in Nepal
17 hours ago

MCC project construction to start from August 2023, the cost so far is Rs 4.77 billion
12 hours ago
Promotion committee recommends three names for a vacant post of secretary
15 hours ago

The story of a road track which could not be opened even in four decades !
11 hours ago

JSP makes massive changes in responsibilities of leaders
13 hours ago

Deepak Raj Giri's satire on Balen-Sampang war of words: ‘If you break your sticks, what will you get support from?’
13 hours ago