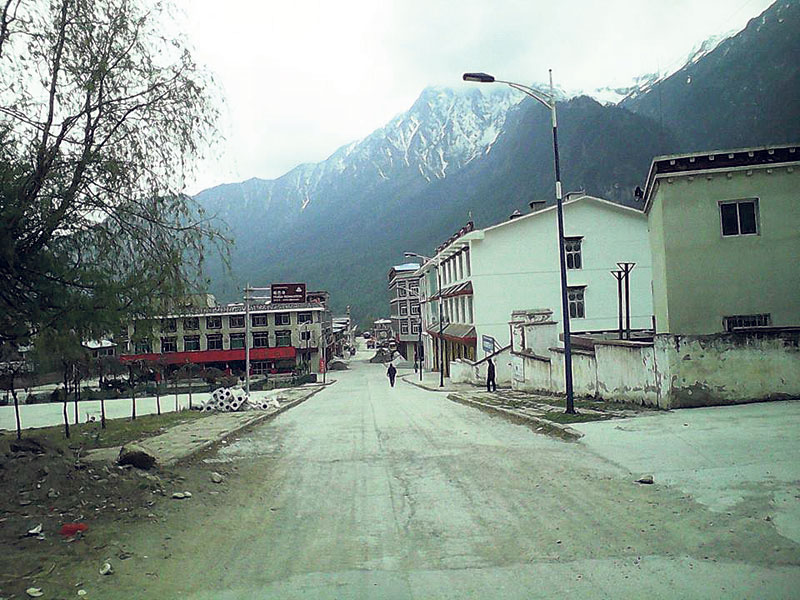 Road repair work in the Chinese side has affected movement: of containers: Officials
RASUWA, Nov 28: Local administration of Rasuwa has implemented token system for containers heading toward Kerung.

According to District Police Office, Rasuwa, the new arrangement has been made as road rehabilitation work is going on in the Kerung-Rasuwagadhi (24 kilometers) section.
The section had seen six big landslides during monsoon earlier this year.

Rasuwagadhi is the only operational trade route between Nepal and China.

Chinese officials are allowing movement of containers for only an hour per day in the section, according to District Police Office, Rasuwa.

Deputy Superintendent of Police Fanindra Prasai said that the token system will facilitate in the smooth movement of containers along the narrow highway.“"We implemented the system when we saw traffic we saw containers parking haphazardly on the side, causing traffic congestion”" Prasai said.

As many as 100 containers have entered Kerung since the token system came into effect from Thursday.

According to Rasuwa police, containers have to get a token from Betrawati before heading toward Rasuwagadhi.“"We are giving priority to containers loaded with exportable goods.

Containers have to hand over the token at Syafrubesi and take a new token before heading toward Kerung”" an official of District Police Office, Rasuwa, said.

Officials in Betrawati are allowing only 10 containers every two hours. As per the new arrangement, containers carrying perishable goods will be parked at Rasuwagadhi transit point while others carrying garments will be sent to the parking yard, according to Prasai.

Chief District Officer of Rasuwa, Krishna Prasad Adhikari, said that they have implemented token system as per the direction of the Ministry of Energy to facilitate the work of the Rasuwagadhi Hydropower Project. The project site is close to the Rasuwagadhi customs point.

According to District Police Office, Rasuwa, 17 vehicle accidents have been recorded on the highway in the past four months. Heavy traffic is blamed for majority of the accidents.

Meanwhile, Chinese authorities have said that the trade route will resume normal operation only after the road rehabilitation work is completed.

Mukunda Paudel, secretary of Nepal-China Trade Association, quoted Chinese officials as saying, that opening the route is not the priority of Chinese officials until the undergoing full-scale maintenance work is completed.“"Repair work is undergoing. Blasting has been done in many parts to expand the road damaged by the landslide”" he added.

While the Rasuwagadhi-Kerung road in China is a double-lane black-topped highway, the Syaphrubesi-Rasuwagadhi road section is still to be graveled.

Kedar Paneru, the chief of Rasuwagadhi Customs Office, said that containers have cut their cargo weight because of the poor condition of the road in the Nepali side.“"We are trying to facilitate traffic along the route," added Paneru.

China's train service, which has already reached Xhigatse, is expected to connect Kerung by 2020. Xhigatse is 550 kilometers away from Kerung, while the distance between Kerung and Kathmandu is only 190 km.