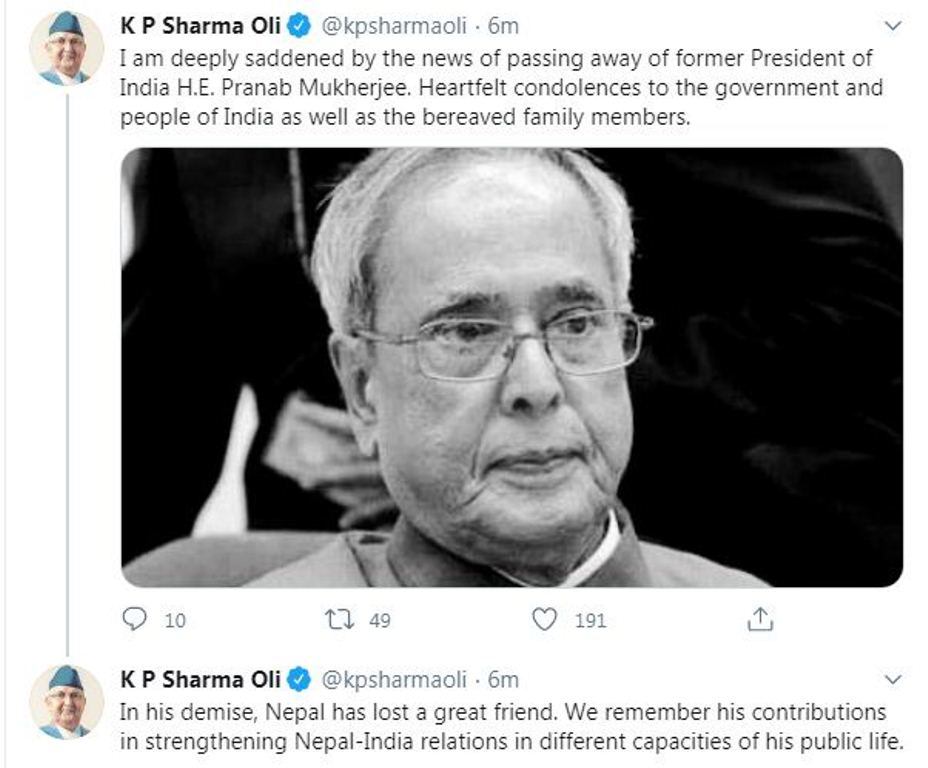 Bhandari tweeted that Nepal has lost a great friend. On behalf of the government, people and herself, the president expressed sadness on the demise of Mukherjee. She also expressed condolence to the bereaved family members.

"I am deeply saddened by the news of passing away of former President of India H.E. Pranab Mukherjee. Heartfelt condolences to the government and people of India as well as the bereaved family members," PM Oli tweeted on Monday evening.

Oli said that Nepal has lost a great friend. "We remember his contributions in strengthening Nepal-India relations in different capacities of his public life," the prime minister said.

NCP Executive Chairman Dahal said that South Asia has lost an intellectual leader. Expressing grief on the demise of Mukherjee, Dahal recalled that Mukherjee paid a visit to Nepal in the capacity of president of India when he was Prime Minister.

Mukherjee, who had tested positive for COVID-19 earlier this month, died on Monday after weeks in hospital.

A veteran politician who served as foreign and finance minister in previous administrations, Mukherjee was in a deep coma and on ventilator support after coming down with a lung infection.

Mukherjee had tested positive for COVID-19 on August 10 and had been hospitalised since.

BEIJING/GENEVA, Jan 31: The World Health Organization (WHO) said on Thursday it was declaring the coronavirus outbreak that has killed 170... Read More...

'You beat me': Colombia's most-wanted drug lord caught
10 minutes ago