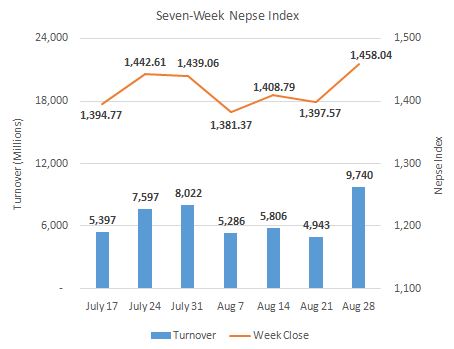 KATHMANDU, Aug 29: While skepticism surrounded the equity market in the face of the lockdown, the stock exchange contrarily saw an upbeat movement since the opening session of the week. The benchmark Nepal Stock Exchange (Nepse) index rose 12.77 points with decent market activity on Sunday. Gains accelerated in the latter three sessions with Monday, Tuesday and Wednesday witnessing gains of 21.26 points, 9.34 points and 21.09 points, respectively. The upbeat week, however, ended with a modest correction of 4 points on Thursday. Eventually, Nepse closed the week up by 60.47 points or 4.33 percent to finish trading at 1,458.04 points.

While the Valley and most of the parts of the country are experiencing a prohibition on movements and restrictions on the majority of business activities, the stock market has continued to see notable participation. A massive jump in turnover was recorded as weekly transactions stood at Rs 9.74 billion against Rs 4.94 billion in the week earlier. Excess liquidity and fresh investments have helped the market to remain afloat in spite of the adverse effects of the pandemic on businesses.

The sensitive Index also rose 3.03 percent in the week, reflecting strength among Class ‘A’ stocks along with the broader market. In terms of sector wise performance, every traded sector ended the week higher, except the Trading segment which inched marginally lower. The Manufacturing & Processing sub-index led the gains and shot up by 7.21 percent. The Non-Life Insurance segment was the other outperformer rallying 6.91 percent. ‘Others’ and Life Insurance sectors followed suit with gains of 6.26 percent and 5.65 percent, respectively. Sub-index of bellwether commercial banks also went up by over three percent in the review period. All other segments ended in green.

This week the equity market saw two dividend announcements both of which were done by microfinance companies. Earlier in the week, Samata Laghubitta Bittiya Sanstha Ltd proposed 6.32 percent cash dividend and 20 percent bonus shares for the fiscal year 2019/20. Similarly, in the latter part of the week, First Microfinance Laghubitta Bittiya Sanstha Ltd announced 13.68 percent dividend including 9.50 percent bonus shares and 4.18 percent cash payout. Besides, Nepse listed over 11 million unit shares of NRN Infrastructure and Development Ltd in the week. Since opening at Rs 306 per share, the investment company has already seen an advance of over 20 percent in two days to finish at Rs 369 per share.

On the technical front, Nepse’s close in green marked a strong bullish candlestick on the weekly chart, finally helping the index to breakout from the narrowing trading range. With the week’s gains, the index now trades close to its weekly resistance at around 1,470-1,480 points zone. While the possibility of some correction cannot be overlooked, the breach of the aforementioned level can help Nepse see another decent upward movement. Both, weekly Relative Strength Index (RSI) and Moving Average Convergence Divergence (MACD) reflect a notable momentum with the buyers also supported by higher than average volumes.

KATHMANDU, Feb 25: Despite an early attempt by the bourse to stretch its rally, gains remained truncated throughout Monday's trading... Read More...