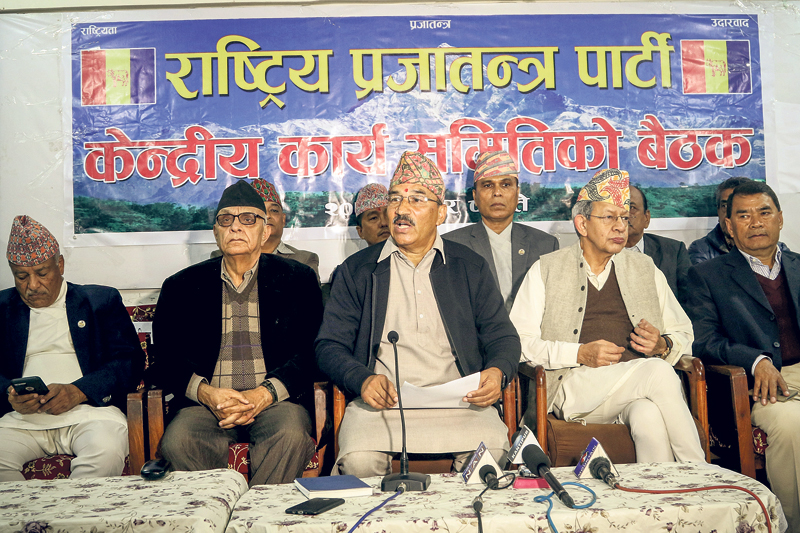 RPP Executive Chairman Kamal Thapa (center) and other leaders during a central committee meeting of the party in Kathmandu on Thursday. Photo: Republica

The first central committee meeting of the unified RPP has decided to put the agenda on hold until the first general convention of the unified party, said Kamal Thapa, executive chairman of unified RPP, on Thursday.

Both the parties had differing agendas in the past. RPP-N led by Thapa was advocating for constitutional monarchy as a prime agenda while Rastriya Prajatantra Party led by Pashupati Shumshere Rana supported republicanism in the country.

“Before the unification, we had different party lines. The unified party's central committee meeting has decided to finalize the party's agenda through its general convention,” reads the statement issued after the meeting. “However the party will continue the demand of reinstating the country as Hindu nation.”

During the Constituent Assembly elections, the RPP-N had raised reinstating constitutional monarchy and Hindu kingdom as its main agenda items.

Thapa said that the party will not oppose the constitution amendment proposal if the government registers the bill in parliament to address the grievances of the Tarai parties.

“Constituent amendment is very necessary for addressing the Madhes issues. So the RPP will strongly stand in favor of the amendment proposal and implementation of the new constitution,” said Thapa.

KATHMANDU, April 21: With the election just around the corner, the Election Commission (EC) has put the dispute over 'Hindu state'... Read More...

Bishwa Prakash's question to Oli: When will you get rid of 'Congress phobia'?
55 minutes ago