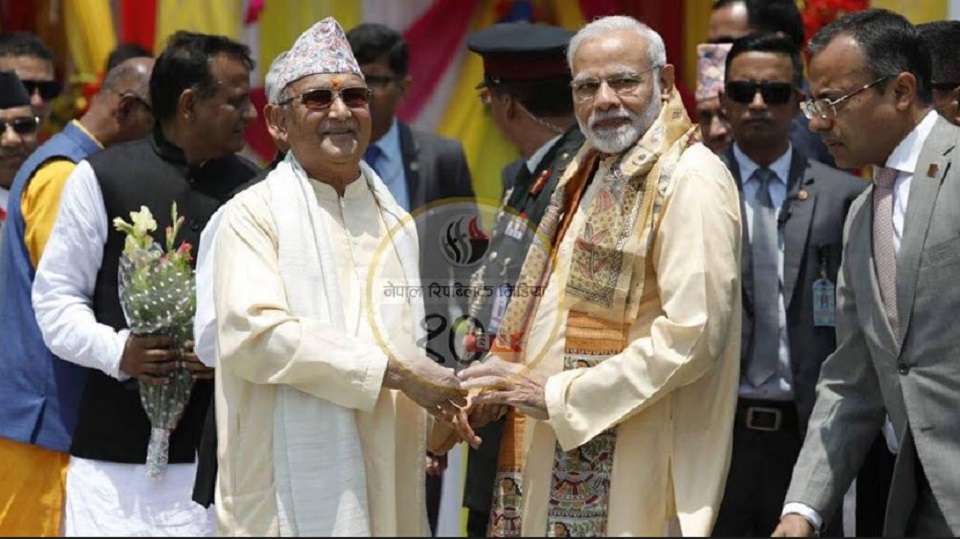 It is possible to resolve border issue with Nepal only if Prime Minister Modi truly deals with the concerns raised by Nepalis with the Rishiman.

India’s reluctance to heed Nepal’s appeal to resolve Kalapani issue diplomatically has exasperated Nepali people in and outside the country. The facts support the claim of Nepal on Kalapani, Lipulekh and Limpiyadhura. The world has come know to know about it.

But Indian Prime Minister Narendra Modi does not seem to care even while Nepal is making appeals to resolve the border issue through amicable bilateral dialogue. During his visit to Nepal in 2014, PM Modi had stressed that Nepal-India friendship is based on equality, mutual benefit and mutual respect. He quickly reminded us that we need to have a Rishiman—heart of the sage—meaning, we need to have broader worldview and need to treat each other as brothers.  By Rishiman, he was hinting at strong fraternity and bond between the two nations.

In a sense, the relations between India and Nepal are indeed guided by the spirit of Rishiman. Government-to-government relation is only a part of greater ties involving business, investments, cultural ties, religion, academia, tourism, professional associations and people-to-people ties.

But what became of the Rishiman of PM Modi on Kalapani issue?

Ashley J Tellis, in RAND’s research finding, states that South Asia could experience “ugly stability” for an extended period and it will have strategic security competitiveness and encouraged brinkmanship. He says the region would face emerging power transition, where the US engagement is a double edged sword.  What could be the contributing factors of such a scenario?

South Asia of 2020 is much different.  India is failing on 'neighborhood first,' alienating close neighbors, even picking unnecessary controversy and jeopardizing the historical mutual trust and confidence. India's alignment with the US could further trigger instability in the region. Shared cultural values and shared economic development and prosperity are no more the inspiring ideals for SAARC countries. Given this, well-meaning Indian scholars have pointed to the need for India to rethink its policies towards the neighbors. However, some of the Indian scholars seem still to be guided by Jawahar Lal Nehru's 'India must dominate or perish' idea. This reflects on their arrogance and dominating attitude towards Nepal and Nepalis.

It is this attitude that encourages India to create territorial disputes with almost every neighbor. This is in sharp contrast to the idea of Rishiman.

India shares land and maritime boundary with eight neighbors. But it has boundary differences with all, except Bhutan and the Maldives. India's relation with Pakistan is exceptionally hostile. One former Indian diplomat likened reconciling the two nuclear-tipped powers to treating two patients whose only disease is allergy of each other. With China, with the recent Galwan valley clash with PLA in Ladakh in which 20 Indian soldiers died, India seems to be up for “two fronts war”.

Many Indian scholars think China's rapid economic rise would challenge India's regional dominance and China's engagement with its neighbors would eventually impact Indian ambitions negatively. Few decades ago, military alliance was not even a subject of discussion within their foreign policy. Today, they are advocating for departing from non-alignment.  Perception can become misperception due to numerous perceptual modifications, writes Dr Madhavi Bhasin in her book India’s Role in South Asia-Perceived Hegemony or Reluctant Leadership?  Joshua Goldstein defines hegemony as ‘being able to dictate, or at least dominate, the rules and arrangements by which international relations, political and economic, are conducted…enjoying special rights for advancing hegemonic interests.

Indian interest in Nepal seems to be guided by such view.

Some Indian scholars have argued that India under Modi has alienated its trusted neighbors. PM Modi's visit to Janakpur and Muktinath had further consolidated religious ties between the two countries. Its reluctance to talk to Nepal to meaningfully resolve border issue has dampened that spirit. Sadly, India does not even care about the Sugauli Treaty of 1816 which actually demarcates Nepal's western boundary with India.

There are ways to solve the border issue between Nepal and India, but not if the southern neighbor resorts to tricks and lies. It is possible only if India and Prime Minister Modi truly deal with the concerns raised by Nepalis with the Rishiman, of whose proponent he was in 2014. Nepalis are asking: What became of Rishiman of PM Modi?

The author is former Spokesperson and Brigadier General of Nepal Army

KATHMANDU, Sept 25: The Federation of Nepalese Chambers of Commerce and  Industry (FNCCI) on Monday organized an interaction on the importance... Read More...