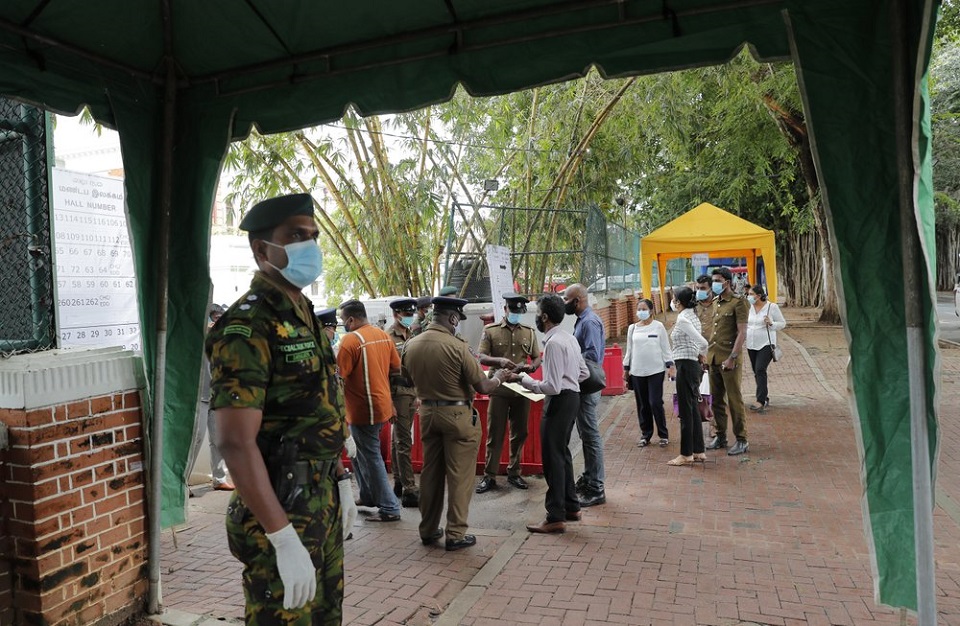 A Sri Lankan government soldier stands guard at the entrance to a ballot counting center as workers show their identity to police officers, a day after voting for general elections in Colombo, Sri Lanka, Thursday, Aug. 6, 2020. (AP Photo/Eranga Jayawardena)

Prime Minister Mahinda Rajapaksa is most likely to be sworn in the same position by his younger brother, President Gotabaya Rajapaksa.

The election results could enable them to change the constitution and strengthen dynastic rule.

“Sri Lanka People’s Front has secured a resounding victory according to official results released so far,” Gotabaya Rajapaksa said in a Twitter message. “It is by belief that that the expectation to have a Parliament that will enable the implementation of my ‘vision for prosperity’ policy will be reality tomorrow,” he said.

The Rajapaksas’ Sri Lanka People’s Front won 128 seats out of the total 196 seats while its main opponent had obtained only 47 seats, the election commissions’ results showed.

Sri Lanka’s parliament has 225 seats, of which 196 members are directly elected while 29 are named from a national list according to the number of votes received by each party or independent group.

The Rajapaksas’ party will get more seats from the national list, which will be announced later Friday.

The brothers need 150 seats or control of two-thirds of seats in Parliament to be able to change the constitution. However, analysts say any attempt by Gotabaya Rajapaksa to push for changes that will strengthen presidential power at the expense of those of the prime minister may trigger sibling rivalry.

Sri Lanka had been ruled by powerful executive presidents since 1978. But a 2015 constitutional amendment strengthened Parliament and the prime minister and put independent commissions in charge of judiciary appointments, police, public services and the conduct of elections.

Gotabaya was elected president last November after projecting himself as the only leader who could secure the country after the Islamic State-inspired bombings of churches and hotels on Easter Sunday that killed 269 people. Since being elected, he has said he had to function under many restrictions because of the constitutional changes.

However, Mahinda Rajapaksa is unlikely to cede any of his powers that might shrink his influence as he works on promoting his son Namal as his heir. Namal and three other members of the Rajapaksa family contested the election and are likely to control key functions in the new administration.

The landslide victory also raises fears of weakening government institutions such as independent commissions for elections, police and public service.

Votes were counted Thursday after the election on Wednesday, which was held under an election commission that emphasized following health guidelines to prevent the spread of the coronavirus.

More than 70% of the country’s more than 16 million eligible voters cast ballots.

The election was originally scheduled for April, but it was twice postponed because of the COVID-19 pandemic. Sri Lanka has largely contained the spread of the virus with 2,839 confirmed cases, including 11 deaths.

Nepal’s trade deficit grew by around 25 percent to Rs 1.26 trillion in first 11 months of current FY
11 hours ago

Analysis: From game-changer to back-up: J&J's COVID vaccine struggles in Europe
22 hours ago
As a Dalit girl is denied a room to rent, an int’l report highlights poor representation of Dalits in  state’s judicial, law enforcement agencies
5 hours ago

Analysis: From game-changer to back-up: J&J's COVID vaccine struggles in Europe
22 hours ago