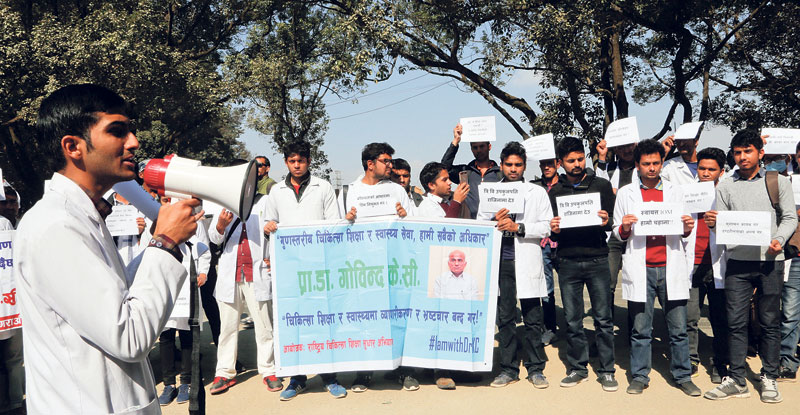 Medical students stage protest outside the vice-chancellor’s office at the Tribhuvan University in Kirtipur Wednesday supporting the demands raised by Dr Govinda KC, who is on a fast-unto-death since November 13. Dr KC has been demanding crucial reforms in the medical education sector. Photo: Dinesh Gole/Republica

KATHMANDU, Nov 24: The Solidarity for Dr KC Alliance (SDKA) staged protest at the TU Office on Wednesday  demanding resignation of Dr Tirtha Raj Khaniya, the vice-chancellor of the Tribhuvan University (TU) and Dr KP Singh, dean of the Institute of Medicine (IOM).

Dr Govinda KC, a senior orthopedician at the TU Teaching Hospital, has been staging a fast-unto-death since November 13 on the hospital premises, demanding crucial reforms in the medical education sector.

The SDKA said it will stage street protests in Kathmandu on Friday and Saturday to press the demands.

The Alliance picketed the TU VC Office from 12:30 -2:00pm on Wednesday demanding their resignation, said Dr Jivan Kshetry, president of SDKA. "We will protest on the streets on Friday and Saturday as the government has remained indifferent to Dr Govinda KC's demands," he added.

On Wednesday, the 11th day of his hunger strike, the condition of Dr KC is deteriorating.

"His condition is serious now. He has refused the saline drip and is being administered oxygen," said Dr Leison Maharjan, the president of the National Resident Doctors' Association (NRDA).

Meanwhle, Minister for Health Gagan Thapa visited Dr KC on Tuesday evening and assured to address his demands. It has been learnt that the government and Dr KC supporters are forming their respective talks team to discuss Dr KC's demands. NRDA confirmed the ongoing preparations to form a talks team.

Dr KC started his latest hunger strike after the government failed to address his demands. In the course of starting his 10th hunger strike, he had issued a ten-point demand. The demands include sacking TU Vice-chancellor Dr Tirtha Raj Khaniya, appointing the Institute of Medicine (IOM) dean on the basis of seniority, implementation of previous agreements, not giving affiliation to any new medical colleges before the passage of the medical education bill by parliament, forwarding the process of impeaching Lokman Singh Karki, chief of the Commission for the Investigation of Abuse of Authority (CIAA), starting investigation against CIAA Commissioner Raj Narayan Pathak, and implementation of the fee structure proposed by the Mathema Commission.

KATHMANDU, July 24: Talks between agitating Dr Govinda KC and the government has begun. It is taking place at the... Read More...

KATHMANDU, Nov 26: The government on Saturday formed a two-member committee to hold talks regarding the demands of senior orthopedic... Read More...