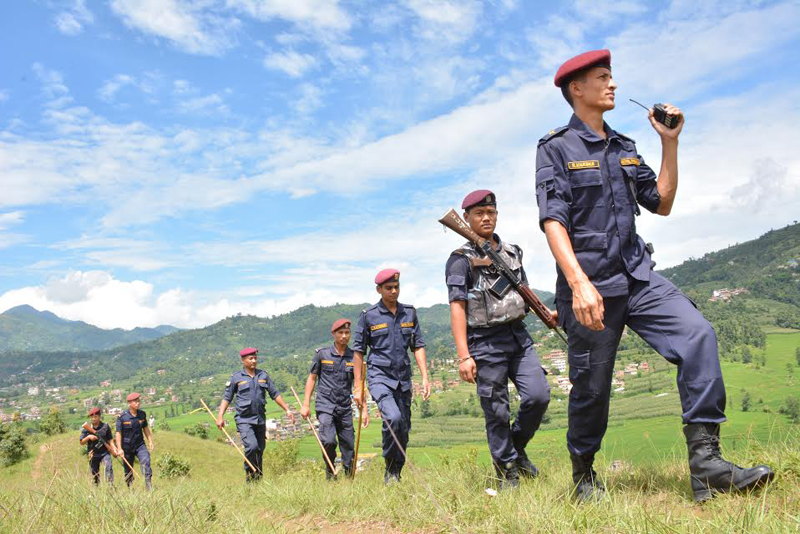 Around 67 percent people do not trust the police and 78 percent believe the police do not understand their issues
“Those were dark days. It was complete chaos,” exclaims Ajeet Lal Karna, 33, a dairy owner from Dhanusa. He recalls the Tarai unrest, when grievances regarding the constitution were high, and tales of state highhandedness were making rounds. “People started referring to the government as draconian, and the police were regarded their guards. Our trust in the state and the police was marred by fear,” he shares. When the violence in Tarai died down, The Tarai-based political parties accepted the call for dialogue. “We slowly started to have a normal life, but one thing did not change: our mistrust of the police.”

It was during this time that the police faced massive public scrutiny. Many identified the police as the ones with guns and batons, and those who made unruly arrests. “The distinction between the right and the wrong had blurred. We saw the police during the protests, and we thought they were the villains. But I have started to realize my mistake,” explains the entrepreneur. Ajeet saw things differently after being a part of Paunch, a reality TV game show that aspires to strengthen trust and collaboration between the police and the public.

Understanding the growing disparity between the public and the police, and realizing the need for dialogue between the two, Search for Common Ground (SFCG) with support from UKAID introduced a ‘reality show’ to act as mediator between the two fractions. The reality show embraces the principle of peacebuilding—by evoking empathy through positive dialogues. Eight people from diverse socio-cultural backgrounds are featured as contestants and are provided with a unique opportunity to get training from the Nepal Police themselves. Notions of the police being corrupt and unethical are busted, as they are exposed to the real work of the police.

“I always thought that the police were bad people. But I was so wrong. They are like us.

They have no intention to harm us,” shares Sophie Sunuwar, a famous make-up artist and LGBT advocate. She explains that being a transgender in Nepali society comes with a price. She was ridiculed for her choice, and there was a deeper fear of security. But the preconceived notion that the police despised LGBT community stopped her from reaching out to the police for support. “I feared the Nepal Police before. But after being a part of the reality show, and getting trained and mentored by the police, I feel I can trust them. They are here for our security, and we shouldn’t fear them. Instead, we should support them.” This anecdotal evidence demonstrates that lack of communication heightens fear and uncertainty of the public towards the police.

A recent survey by SFCG provides evidences of the growing mistrust of the public towards the police. According to the report, 67 percent people do not trust the police. Whereas 78 percent believe that the police do not understand their issues, which further discourages them from seeking support. The Inspector General of Police (IGP), Upendra Kanta Aryal, acknowledges that there are differences, and the police through various campaigns like ‘Police My Friend’, ‘peace angels’ and ‘police public hand-in-hand’ is re-branding itself. He also concedes the instrumental role of media in mediating differences. He shares, “We are hopeful that the reality TV game show will help foster a sense of belonging of the public towards the police. ‘PAHUNCH’ is designed to increase public access to justice and security, and it also echoes a powerful message that the Nepal Police cannot function effectively without public support.”

The enthusiastic participation of Nepal Police in the conceptualization and production of the reality TV show also proves that through mass media, the Nepal Police is making a sincere effort to garner public trust and support. The show provides a platform for the Nepal Police to echo their core values: determination, selfless service, sensitivity and people-first belief. The mentors during the thematic tasks display profound understanding of social issues, and their strong belief on police-public collaboration.  The mentors from the Nepal Police take the reality show as a ‘positive-branding’ opportunity, and a step forward to humanize the profession.

There’s no doubt that reality shows play an influential role in changing behavior. The mass appeal towards unscripted interactions, actual occurrences, and confessional narration of the contestants helps spark discussion. The thought of reality series being real and uninfluenced provides an opportunity to showcase real grievances and questions. Questions posed by the contestants are dealt with utmost honesty, and the police officers are not shy to discuss their limitation and challenges.

“My friends who were once negative towards the police have started appreciating them.

They have so many question related to the police and their work,” shares, Ajeet with a smile. From a behavior change communications lens, Pahunch has helped humanize the police, and establish them as ‘accessible’ and ‘people focused.’ The reality show has no intent to turn police into demigods, but calls for evidence-based insights and observations: clarity of the police work and understanding of their limitations helps forge peace, collaboration and trust.

When people are rightly informed, it empowers them, and triggers a sense of acceptance.

As the contestants solve cases with their new-found investigative skills, they experience empathy for the police, go through similar challenges, and are bestowed with a greater realization: “the public too are police without the blue uniform. Both public and police share equal power to uphold peace and security”. This is the key message of the reality TV game show.

There are millions of makeup tutorial videos and articles on the internet, but your skin needs a comprehensive care.  Any... Read More...