Agricultural growth has remained low and erratic because of high dependency on monsoon owing to weak irrigation facility.

So is it working slowly? Agriculture still contributes about one third in national economy. Besides, Nepal is still known as an agricultural country and it occupies about 60 percent labor force and is feeding most of the Nepali people. In this context, I remember an old proverb which says; “when there is food, there are many problems; when there is no food, there is only one problem”.

Although there has been slow growth or poor performance, agriculture has never been ruined in Nepal. Yes, we all agree that overall performance of the agriculture sector over this period was not satisfactory. Though agriculture was prioritized in most of the past periodic plans intending to play a pioneering role in production, food security and employment generation, the outputs could not be as anticipated due to weak implementation of these plans. Agricultural growth has remained low and erratic because of its high dependency on monsoon owing to weak irrigation facility.

There are many review reports on the performance of Nepali agriculture. The review report prepared for Agriculture Development Strategy (ADS) says that Agricultural Perspective Plan (APP), which was started in 1995/96 and terminated in 2015/16, had made good progress in several indicators of agriculture. For example, income per capita and productivity of agricultural labor were increased, poverty was reduced, and malnutrition declined. The agriculture road network has considerably expanded and irrigation coverage has increased to some extent.

In spite of the slow growth, there are some positive signals in the agricultural sector. Agribusiness and commercial agriculture is growing.  Horticulture, poultry and dairy industries are moving fast and the private sector is improving productivity. Poultry production has adopted a highly commercial profile and scale, solely through private sector investment. Agribusiness sectors in tea, coffee, medicinal plants, flowers and vegetable seeds have been growing satisfactorily. Tea and coffee production has grown between 15 to 30 percent annually since 1996.

There are more than 5,000 agricultural cooperatives (mostly dairy, tea, coffee, honey and citrus). Several policies including the National Agricultural Policy (2004), Agro-Business Promotion Policy (2006) and several other long-term plans are all emphasizing the central role of agriculture to the national economy and the need of support to develop the sector. Access to infrastructures and services including road, market and agricultural service centers have also been improving considerably. Already 75 percent population has access to telephone. This has impacted on agriculture growth positively. Comparison between 1967 and 2017 shows the changes (see the table below): 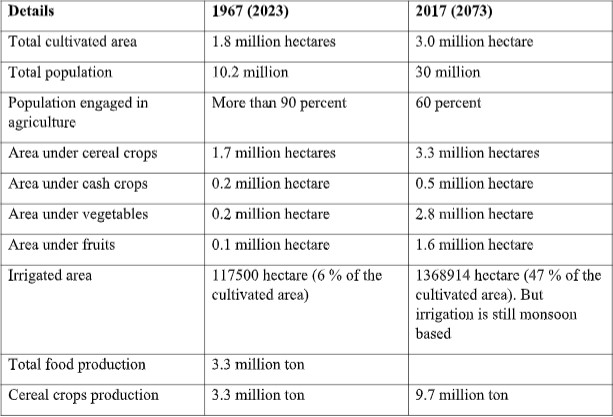 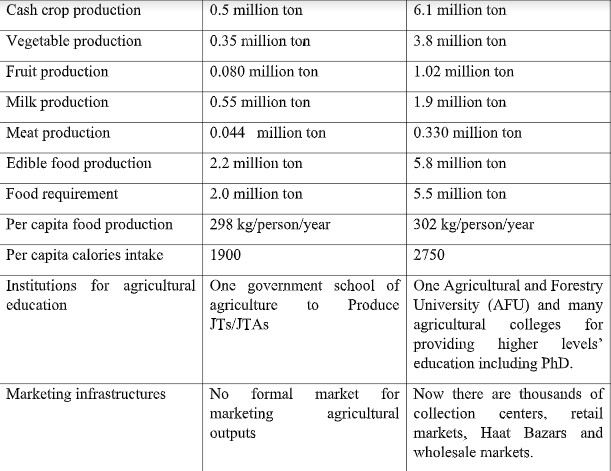 In almost all agriculture subsectors (crops, livestock, fishery, and forestry) there has been some progress in terms of production or/and productivity. However, except wheat, yield growth of most of the major cereal crops in Nepal is considerably lower than in neighboring countries. Despite the gradual increasing trend  in  the  yield  of  major  cereal  crops  (wheat,  maize,  rice),  the national average  is  below 50 percent of  the  attainable yield  in  the farmers’ fields. This occurs because two third of the agriculture is under rain-fed condition that depends upon the mercy of monsoons and largely of imported inputs like chemical fertilizers.

The food crops particularly the cereals (rice, maize, wheat, millet, barley) are the main source of dietary energy for most Nepali people. The data of edible food production and national requirement of the foods indicate that there is only a limited imbalance of food supply in the country at the national level.  A slight deficit exists in the national food requirement in the country, except during the unfavorable climatic conditions. The deficit  is  not large (usually three to five percent of  the total  requirement)  in  the  aggregate  and  percentage  terms.  However, there are problems of food insecurity at the households and district level particularly for the people in the remote  hills and mountain districts as  well as  those  of  poorest  households  in  the  accessible productive  areas.

Not one factor can be identified as responsible for such poor performance. Farm sizes are small, land is fragmented and land management is neglected. Basic modern technology inputs like improved cultivars, packages of technologies, seeds, breeds and feeds are in short supply. Agriculture research is not getting high priority in government funding and young scientists are leaving the country. Available improved technologies are not adequately transferred to the farmers due to the shortage of field technicians. Production systems are still subsistence based and not yet market oriented. Physical infrastructures are inadequate for commercialization. Production planning for market demand is either weak or lacking. Long term plans are not reflected adequately in the periodic plans and annual programs. Formal cooperative training, education and information dissemination is inadequate. Regulation and monitoring of cooperatives is very weak. There are many other challenging issues due to which agriculture in Nepal could not perform as expected.

Different studies show that technology and tools we are using for agriculture development are almost traditional—irrigation depends on rain‐water, market accessibility is poor and storage facilities are inadequate and inefficient. Together, these have made the life of farmers hard. Thus they need support and encouragement.

KATHMANDU, June 27: Minister for Agriculture and Livestock Development, Ghanashayam Bhsual has said that the agriculture sector is being ruined... Read More...