Weekly Commentary: Nepse up for a second straight week as investors gather confidence 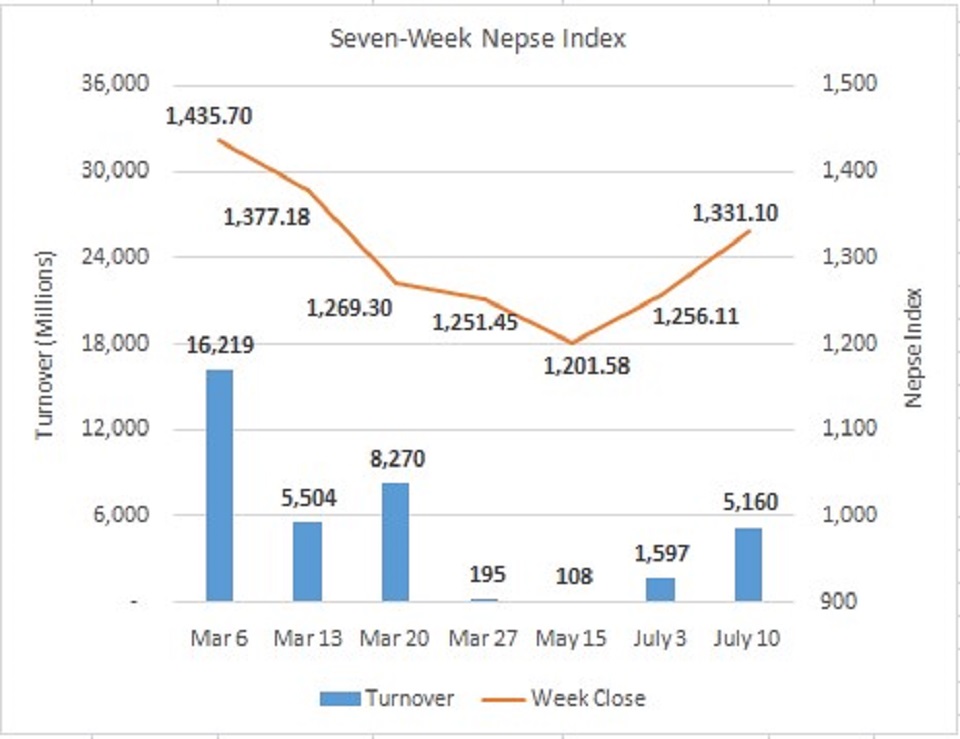 KATHMANDU, July 11: The post-lockdown relaxation trading has seen fairly favorable movement as investors saw another week of bullish movement. Despite the previous week closing with a 6 percent rout, the market remained fairly stable this week with four days of advance and one day of correction. The benchmark Nepal Stock Exchange (Nepse) index saw a moderate gain and closed 9 points higher on Sunday. The following two sessions added to the gains as the index rose 33 points and 37 points on Monday and Tuesday. The index retraced 10 points on Wednesday, while Thursday was marked by a modest rise of 4 points. Overall, the index ended the review period 75 points or 4.23 percent higher at 1,331.10 points.

In the week, market activity remained above par with daily average turnover standing at above Rs. 1 billion. Hopes of economic recovery as well as return to normalcy have been the major support for the market keeping it from faltering down. Nonetheless, the COVID-19 cases have continued to rise in the country, albeit with a slower pace. Hence, some uncertainty over sustainable recovery still prevails keeping the stock market in check. End of the fourth quarter in the next week will also mark the time for listed stocks to report their earnings for the year. The lockdown effect reflected by such financial results will likely be key in driving the prices in the coming months. Investors are also likely to maintain a watchful stance in the coming week ahead of the monetary policy announcement due in late July.

Stock wise turnover was led by Nepal Reinsurance Company Ltd with a turnover of over Rs. 795 million. Nepal Life Insurance Co. Ltd’ shares were also heavily traded as more than Rs. 433 million worth of the stocks were exchanged in the day. NMB Bank Ltd, Himalayan Distillery Ltd and Chhimek Laghubitta Bittiya Sanstha Ltd were among other actively traded scrips in the week.

On the technical front, Nepse formed a bullish weekly candlestick for a second straight week. Following wild trading in the week earlier, the index found some footing in the week registering a more stabilized rise in the week. Weekly technical indicators, subsequently, suggest buying side weighing in on the market in a poised manner. Nonetheless, the index was unable to break the resistance zone at the previous week high of 1,256 points which will likely be tested in the coming week again. The breach of the resistance will clear way for more upside movement towards 1,440’s zone. On the flipside, failure to breach the resistance can see the market make further sideways movement. Minor support is provided by 1,300 points psychological mark.

KATHMANDU: The Nepal Stock Exchange (Nepse) index witnessed a sharp rally at the beginning of trading on Thursday. The benchmark... Read More...