33 houses swept away by rain-triggered floods

SINDHUPALCHOWK, July 9:  Two people died and at least 20 others have gone missing in flash floods triggered by incessant rainfall in three different settlements along the Bhotekoshi Corridor in Sindhupalchowk district at around 1 am on Thursday. The swollen river and other local streams as a result of the incessant rainfall throughout the night have swept away as many as 33 houses.

As many as 16 locals have gone missing after the Yalbo stream in  Bahrabise Municipality-5 washed away eleven houses in Gati Jambu, according to Deputy Superintendent of Police (DSP) Madhav Prasad Kafle, information officer at the Sindhupalchowk District Police Office. Two dead bodies were recovered from the same settlement. The deceased have been identified as Nikesh Basnet, 20, and his three-year-old daughter. Four others have sustained injuries in the flood.

Similarly, four others have gone missing in Bhotekoshi Rural Municipality-5, Bulkuti as flood swept two houses away. Two children were injured when flood from the Bulkoti creek entered the settlement.

Khagdal in Bahrabise-3 has reported a huge loss due to floods triggered by the incessant rainfall since Wednesday evening. A total of 20 houses were swept away, while some other houses have been buried by the flood debris. The flood has also destroyed a bridge over Khagdal stream, according to the DSP Kafle. A bus, a truck, a Scorpio van and a tractor parked alongside the Araniko Highway were swept away by the flood.

Chief District Officer (CDO) Umesh Kumar Dhakal said security personnel have already reached the site and started rescuing the victims. Although security forces were informed of the incident at night itself, they couldn’t reach the affected areas due to incessant rainfall. CDO Dhakal said that the security personnel left for the affected areas only in the morning on foot as the Araniko Highway was disrupted at several places due to landslides triggered by the incessant rainfall.

With heavy rainfall in the region, water level in the Bhotekoshi River and local rivulets rose above the danger level. CDO  Dhakal said that security forces could not reach the incident site as the Araniko Highway is disrupted at various places due to landslides. Landslide has blocked the road at Balefi Rural Municipality-7 and 9, Bahrabise-3, 5 and 8.  “The details about the incident are yet to be collected,” CDO Dhakal said.

Meanwhile, Speaker of the House of Representatives and lawmaker representing the district, Agni Prasad Sapkota could not visit the affected areas owing to bad weather.

According to Shreedhar Neupane, press aide to Speaker Sapkota, the helicopter carrying them returned to Dhulikhel in Kavre district due to unfavorable weather. 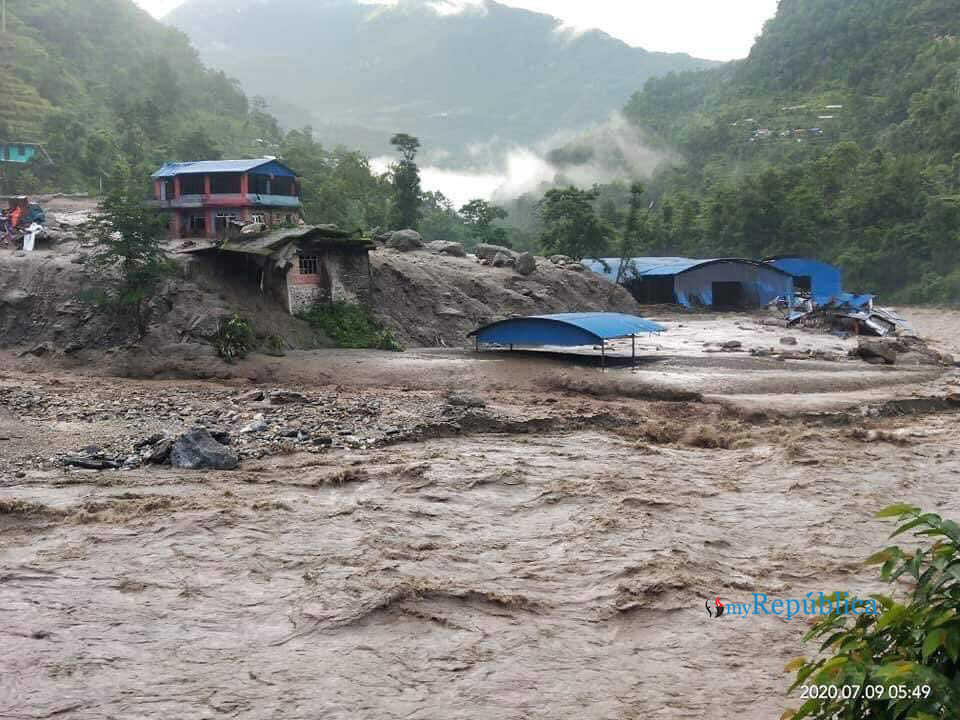 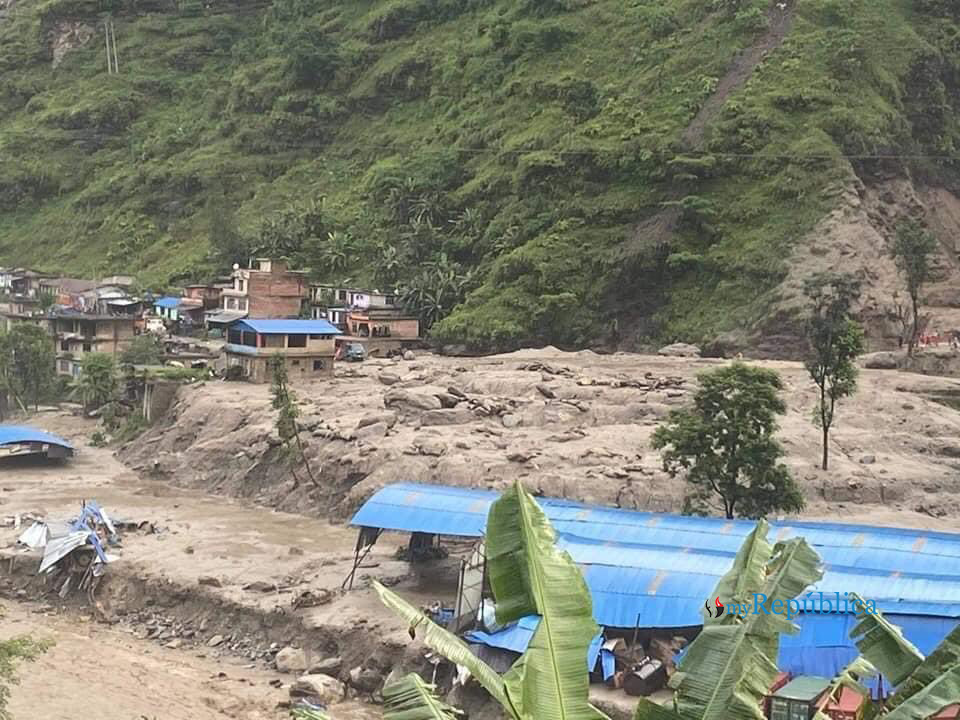 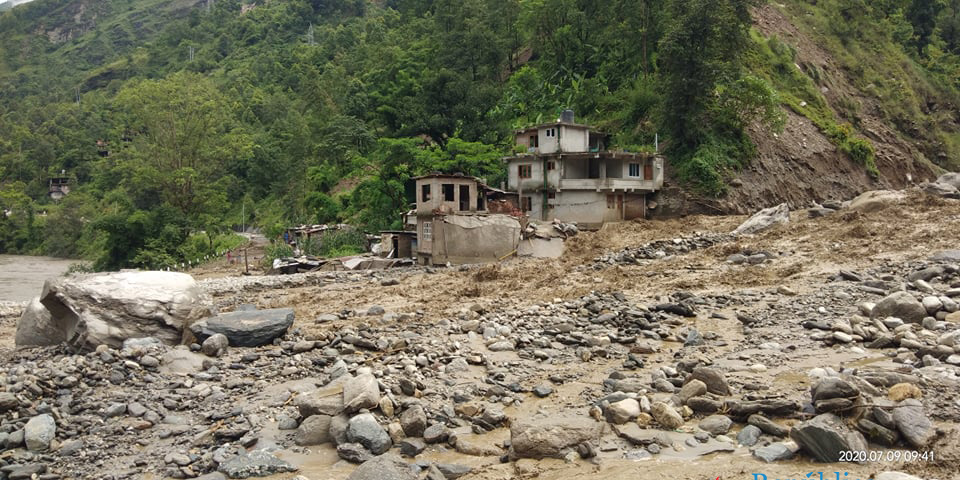 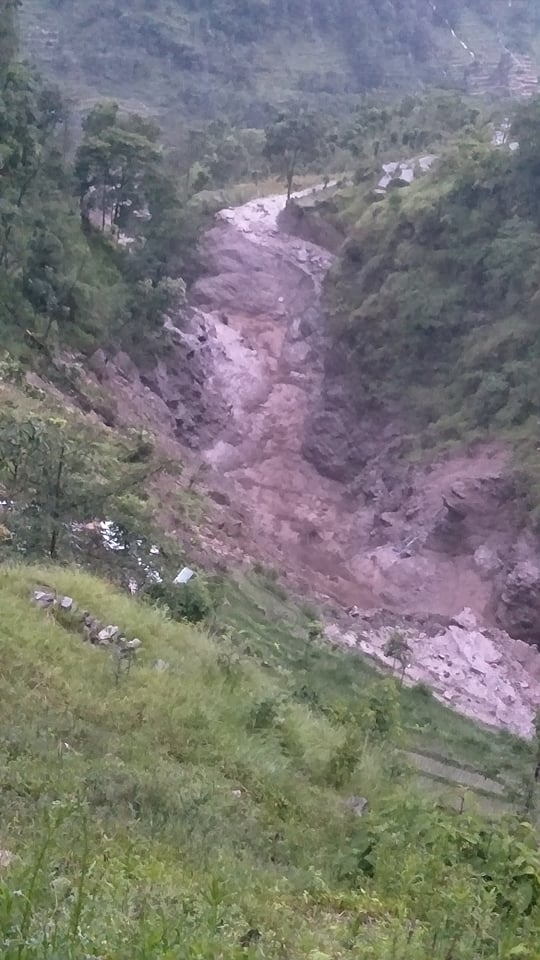 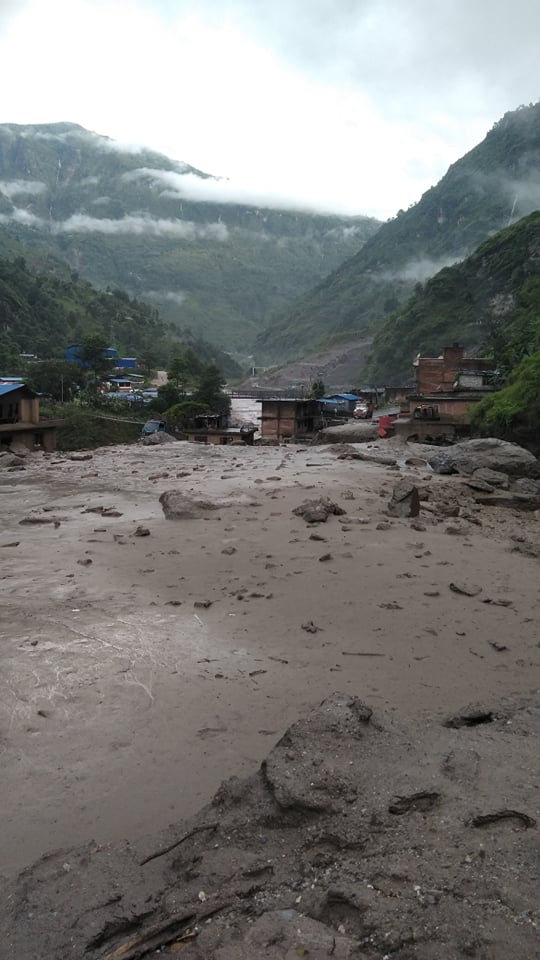 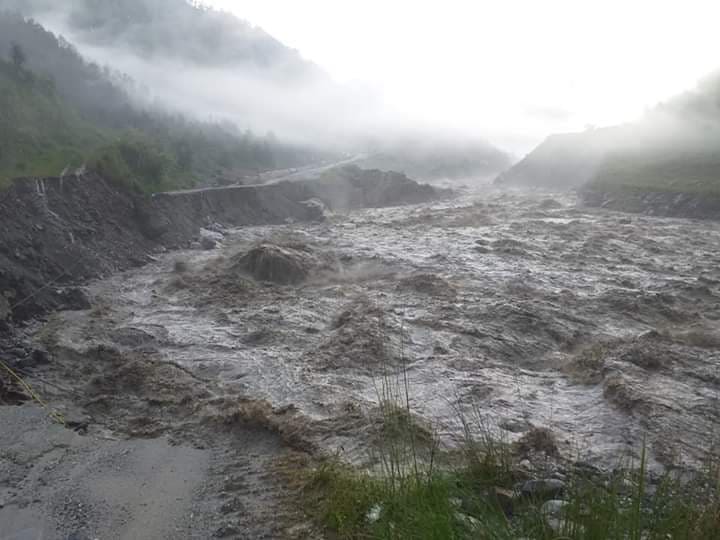 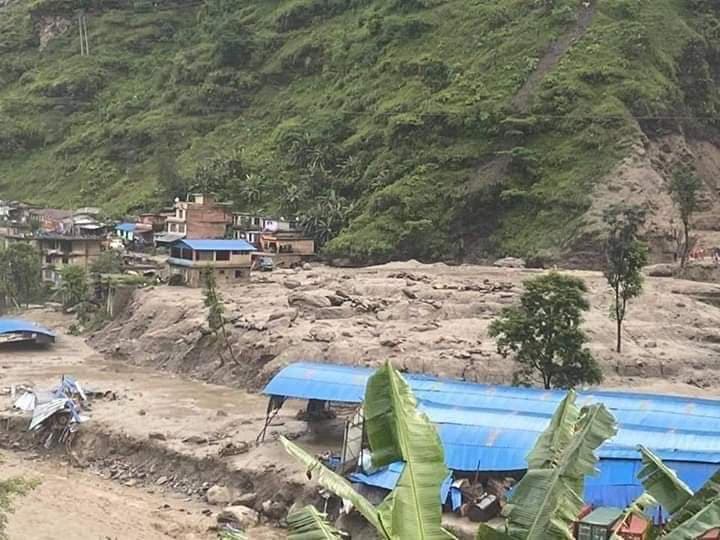 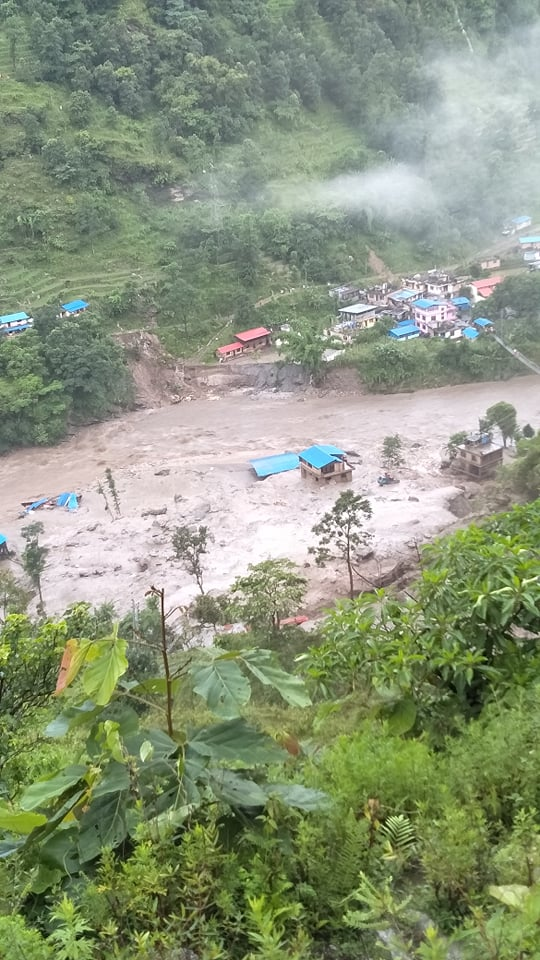 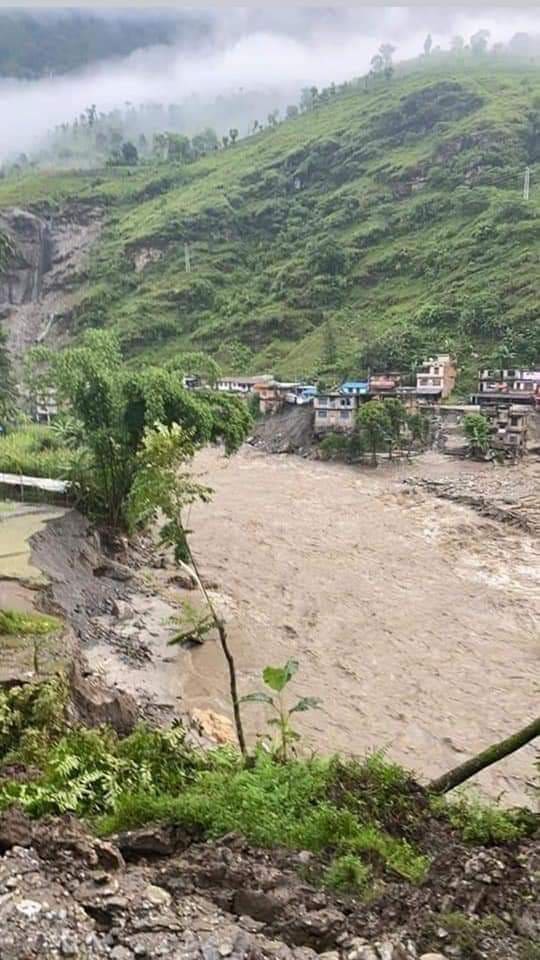 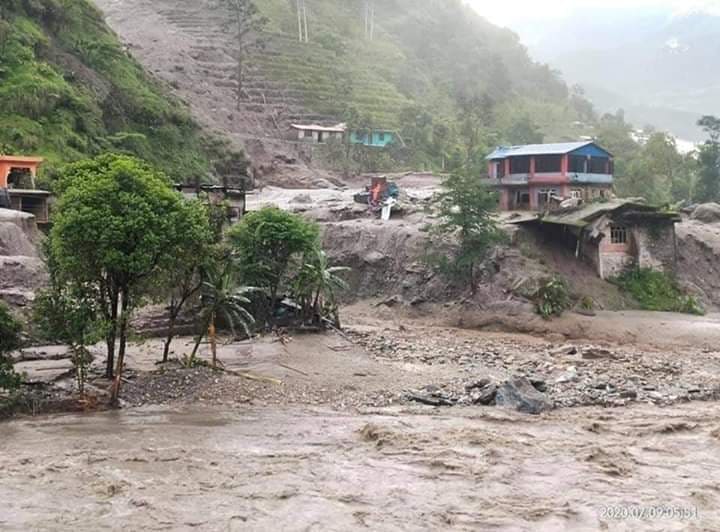 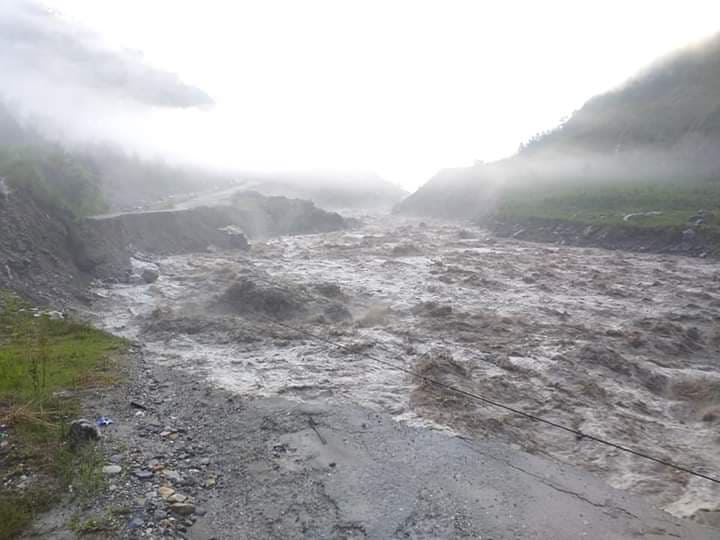 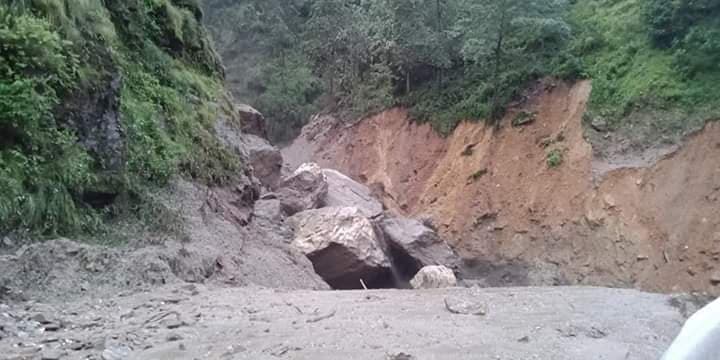 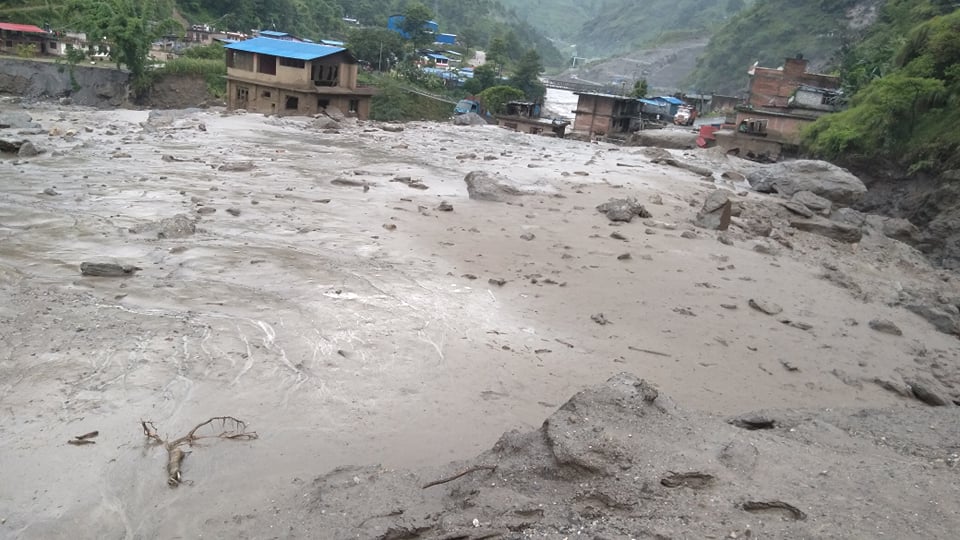 16 houses swept away by flood in Sindhupalchowk; two die, 23 missing

SINDHUPALCHOWK, July 9:  As many as 16 houses were swept away by floods triggered by incessant rainfall in two settlements... Read More...

260 households flee after flood in Bhotekoshi

RASUWA, Aug 20: A flood in Khalde of Uttargaya Rural Municipality-5 of Rasuwa wreaked havoc displacing 260 households in the... Read More...

SINDHUPALCHOWK, July 7: Locals of Tatopani VDC in Sindhupalchowk district are still gripped by fear of flooding although the water level in the Bhotekoshi... Read More...