Boudhhnath Stupa to remain open for public from Nov 22 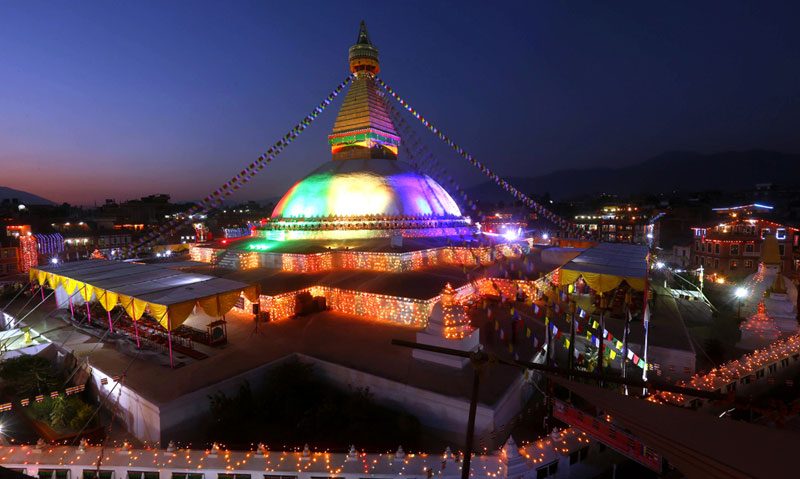 KATHMANDU, Nov 21: The ancient Boudhhanath Stupa at Boudha in the capital will remain open for the public from tomorrow, according to the Boudhhanath Area Development Committee (BADC).

The monument, believed to be first built in the fifth century, is a UNESCO World Heritage Site. It had sustained partial damage during the Gorkha Earthquake in April last year and the entrance for public inside the Stupa was prohibited thereafter.
According to the BADC, the renovation of the Stupa was carried out at the cost of Rs 230 million.

The inaugural ceremony will be attended by ambassadors of various countries having Buddhist population, including India, China, Sri Lanka, Myanmar, Japan, Thailand among others and representatives of diplomatic missions in Kathmandu.
Also, scores of religious leaders from several Buddhist countries are partaking in the inaugural ceremony, the Committee said.

On Sunday night, the Pran-Prathistha process (infusing life in idol) in Stupa was done to bring it to life following the quake. Religious leaders of Mahayana sect held a special atonement ritual seeking pardon for the mistakes during the renovation effort.

Furthermore, the honorific religious leaders from both Mahayana and Vajrayan sects of the Buddhism offered prayers and recited hymns from their holy scriptures for the world peace. RSS

Condition of public toilets remain same despite hike in budget